Is Alphasmart the ultimate writers' tool?

I have two Alphasmart keyboards, one for home and the other for travel, and can’t say enough good things about them. It’s lighter than any laptop I’ve used, built like a tank, and the keys have a nice, crisp “clicky” feel to them under my fingertips. Plus, the battery life is simply astounding. For the typical $40-$50 USD asking price on Ebay, it’s well worth it…

Somebody make that last logitech-branded writing device because I’d be on that thing like white on rice.

I spent thousands of hours recording my music and the music of others in the 80s in beautiful hi-fi stereo.

I sold it and the majority of my other analogue toys and tried to adapt to modern digital tools, and came away frustrated and tired, simply because I couldn’t ever get to the ease by which the 80-8 allowed me to input music to tape and over dub in a perfect psychological space.

I’m now planning to find an analogue device to get back to recording like that again.

My dad is a psychologist and has gone thru about 6 Alphasmart Danas over the past 10 years. It’s a perfect device for him since he not very technical, hates to futz around with complex devices, needs a full sized mechanical keyboard for basic note taking and maintaining patient info. I’ve had to keep an old Windows XP machine operational for the last 5 years just so he can keep running Palm Desktop software.

He’s dunked it, dropped it, lost it, smashed it, and spilled god knows what-all on it and it still keeps plugging along. 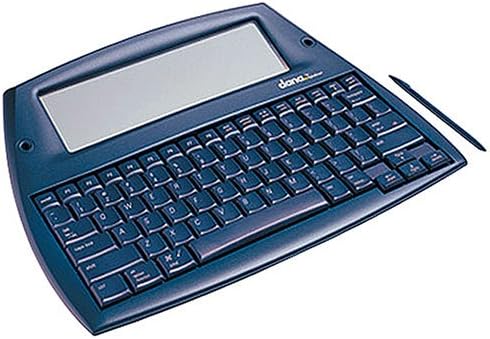 Longer answer: Editing is part of writing, at least for anything more ambitious than a grocery list. I suppose it one’s process starts with an uninterrupted word-dump, an Alphasmart might represent a step up from a yellow legal pad*, but for producing finished copy, from scratch notes to final draft, I haven’t looked back since I got my first copy of Magic Wand running on a Zenith CP/M machine with a 12-inch screen and full keyboard.

[*] Which seems to be what MikeKStar’s dad is replacing with an Alphasmart.

One major downer, unless this isn’t how you roll, is that alphasmarts have pretty much exactly as much vertical workroom as their appearance would suggest.

They will, indeed, plug along for ages on a mere trickle of battery power, and a fairly portable(light, all surfaces durable except the screen, which isn’t the feeblest I’ve seen; but when the rest of the device is some sort of ABS/Polycarbonate computer plastic of reasonable thickness, the mission-critical bit that’s built on a glass substrate tends to stand out); but your writing style had better not involve any editing until you get back to HQ, or any reliance on being able to glance at the paragraph above or below your working location.

Unfortunately, nobody really tried, at least with enough success to leave a ripple as they sank for the last time, to re-implement them with modern technology. Non-backlit LCDs larger than the ubiquitous 20x4 character displays are somewhere between niche and extinct(the OLPC’s optionally-backlit one isn’t exactly off-the-shelf these days; but it’s probably the best choice if you were thinking of ordering 10,000 of something. E-ink is still a bit too slow, and anything backlit would have to break the laws of physics to get similar battery life, even with advances in silicon.

For the confused or uninitiated (I’m both!) here’s a Wikipedia run-down of the various models:

The AlphaSmart was a brand of portable, battery powered, word-processing keyboards manufactured by NEO Direct, Inc. (formerly Renaissance Learning, Inc, formerly AlphaSmart, Inc., formerly Intelligent Peripheral Devices, Inc.). The models were discontinued by the company in late September 2013, although it still offers support and software to existing users. The AlphaSmart was a keyboarding device that enabled a person to work on the go, much like a laptop computer, but it was strictly for word...

Personally, I use Scrivener. I have a simple 14" laptop and Scrivener. I save files to two separate “cloud accounts” so I have redundant off site backups and I use Google Keep to scratch notes when I am out if I think of anything I may wish to expand upon later.

[quote=“MikeKStar, post:5, topic:60417”]He’s dunked it, dropped it, lost it, smashed it, and spilled god knows what-all on it and it still keeps plugging along.[/quote]I was just thinking that it ought to be easily washable, because “I can’t write now, I’ve got to engage in a laborious cleaning process for my keyboard!” is just as good an excuse as anything else.

The Hemingwrite (no, I will not call it “Freewrite”) was intriguing enough that I jumped on board the Kickstarter, but I decided that I wanted some distraction-free writing that was more portable and sooner than “Maybe in September.” Funnily enough, I received my Neo2 in the mail on Monday. Apart from a spacebar issue (the spacebar has been replaced, and whoever replaced it forgot to put the metal clip back in so I have a wobbly spacebar with dead spots at either end) it’s really pleasant to type on and exactly what I was looking for.

I agree that there’s room for a reimplementation with more modern technology that is priced below the Hemingwrite, though the Alphasmarts when new were in the $250 range themselves, I think. In my pre laptop days, I did a pretty surprising amount of writing on a Handspring Visor with an attached foldable Targus keyboard. I’m looking to get back to that distraction-free nirvana. The Alphasmart may not be for everyone, but for folks who (like me) are easily pulled away from the task at hand by the glitter of Interwebz tabs and who (also like me) tend to get stuck going back to rework old bits of the story and would benefit from a machine that makes that a little less possible, this thing is pretty close to exactly right.

I really like mine but I have a few minor qualms with the interface (Neo2, these are all likely addressed on the Dana):

But the battery life and overall neatness of the thing is outstanding. My favorite semi-obscure feature is ctrl+N, which will clear the current buffer and offer to save your current buffer with whatever filename, which can be reloaded whenever with ctrl+L. It’s crazy light and you can plug it directly into a printer for a typewriter simulation where it spits out double spaced 12 point typewriter serifed font. The Alphasmart was originally Mac-only so the keyboard uses the Mac scheme for non-standard input characters. You can even change the keyboard layout to two different one handed setups, or dvorak. The storage is massive but not anywhere near a gigabyte.

I’ve learned of a similar product called a Quickpad, which accepts memory sticks (iirc) and boots to what’s basically a dos prompt, so you can make .bat files and stuff, which suits some people’s purposes better. I think also the battery life on the Quickpad isn’t as good but it’s still very impressive compared to a laptop.

These are the strange children of the TRS-80 Model 100.

No love for the eMate?

Though what I’d want would be to strip all the tutorial stuff off there (as you can do with the Neo).

I’m surprised you don’t use an Amstrad PCW, @beschizza

I actually had one for a little while! It was basically a really good word processor (but a full size desktop, which would make for some high-end ironic writing at the coffeehouse)

I’ve got an Alphasmart. I found it at a dump years ago, but haven’t used it much. The best things about it IMO are focus of use, and long battery life. The worst things are the keyboard (not horrible, but I have better), and the ease of editing. I am a somewhat sloppy typer - especially on a compact keyboard. So I need to fix as I type. When I realized I was needing to make notes on a pad of paper to remind me what to edit, the Alphasmart went on the shelf.

What I recommend, which is slightly less portable, is an old laptop. There are so many viable options out there. The focus is a bit more broad - it doesn’t force one to type, and type only - but without ethernet of WiFi it presents less distractions. I use an old PowerBook 1400. The main portability problem is the lack of batteries - new batteries for an old laptop are expensive, and still only get you a couple hours of use if you’re lucky, compared to practically forever with an AlphaSmart. So it’s only practically an option for tethered use.

What I’d ideally do is make a word processing program on a microcontroller, and embed it in an old full-size serial keyboard. The easy way would be to just interface it with the existing keyboard circuitry. Although a better option would be to replace the keyboard circuitry as well, with the dual advantages of reduced power draw as well as being more compact, allowing for more internal battery options.

Might as well get a Model 100. It takes AA batteries.

Rob, I have to give you some corrections:

All that said: I’m a backer of the Hemingwrite Kickstarter and I own an Alphasmart Dana Wireless 2.

It’s horrid. Battery life is crap, there’s no easy way to transport it, the screen is horrible to read in sunlight, and I absolutely loathe the keyboard (and I drafted a 70,000 word novel on an iPad with an Apple wireless keyboard!). We won’t get into the fact that I can’t get the ancient PalmOS 4 software to do much more than sit there and stare at me.

No, the Alphasmart served its purpose 10-15 years ago, but my needs are far beyond what it can serve up now. I’m happily awaiting my Freewrite in a couple of months.

That thing makes my neck hurt just thinking about trying to use it.