It looks like the toy falls under the category of parody. All I know for sure is that Roberts will obviously vote in favour of the larger corporation.

Yet 10 years ago, Jack Daniels was pretty chill about this stuff.

Patrick Wensink has posted a very nice and friendly cease-and-desist letter from Christy Susman, a Jack Daniel’s company’s trademark lawyer, who were concerned about the cover on his bo…

Definitely clear on copyright grounds because of parody protections. They might have a case on Trademark grounds for the bottle and label being so close, but that’s even less likely, as they both have parody protections to consider, as well as the fact that Jack Daniel’s trademarks will be filed under a food/beverage category and not that of pet chew toys (trademarks only cover the categories they’ve been filed for and are being used in).

In 2000, a year after Kieron Dwyer made comic books, t-shirts, and stickers with his version of the Starbucks logo, the company sued him, obtaining an injunction that prevented Dwyer from using the parody until the case was scheduled to go to court over a year later. When the case was finally settled, Dwyer was allowed to continue displaying his logo but only in extremely limited circumstances. No more comic books, t-shirts, or stickers: he may post the image on the web but not on his own website – nor may he link from his website to any other sites that show the parody. In short, Dwyer is permitted to use the logo as long as Starbucks can be confident that no one will see it.

Edited due to lack of onebox

An over rated booze

I’ll just take this opportunity to point out that a Black man named Nathan Green taught Jack Daniel how to make whiskey but didn’t get the recognition he deserved until very recently.
The company has a lot of nerve going after someone else over a parody.

Nathan "Nearest" Green (c. 1820 – unknown), incorrectly spelled "Nearis" in an 1880 census,[failed verification] was an American head stiller, more commonly referred to as a master distiller. Born into slavery and emancipated after the American Civil War, he taught his distilling techniques to Jack Daniel, founder of the Jack Daniel's Tennessee whiskey distillery. Green was hired as the first master distiller for Jack Daniel Distillery, and he is the first African-American master distiller So...

This could set a great precedent. I am really hopeful that the Bark Street Journal will finally get some justice out of that finance rag that stole their branding. 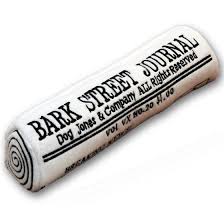 That’s where my girlfriend’s dogs get all their news about trades on the Neutered Yorkie Stick Exchange!

I’ll just take this opportunity to point out that a Black man named Nathan Green taught Jack Daniel how to make whiskey but didn’t get the recognition he deserved until very recently.

But seriously, this is so common as to be expected… especially down here.

as well as the fact that Jack Daniel’s trademarks will be filed under a food/beverage category and not that of pet chew toys (trademarks only cover the categories they’ve been filed for and are being used in).

IANAL, but this seems the key to me. Jack Daniels’ only possible route to complaint could be trademark violation. You can’t copyright a product design. But a trademark claim will fall apart because those only succeed when “customer confusion” can be shown. If there’s no chance of customers confusing your product for another (because it’s in a completely different market segment) then you have no case.

Presumably this is why they are now appealing to the Supreme Court- because they lost on these grounds everywhere else.

This is clearly parody, though I think the have the bottle shape trademarked, so that is probably what this is about. I am not sure how parody laws protect that. The again, it isn’t an actual bottle, but rubber/silicone/plastic whatever shaped like a bottle.

If the toy bottle shape was changed, would that appease them?

While the Company never fore fronted Green. It’s important to point out that neither the company, nor the Daniels family ever denied or hid Green’s involvement.

Though they didn’t list Green as their first head distiller until 2017, company histories and materials had previously mentioned him as part of Jack Daniel’s early history in distilling. Though of course bowdlerized. For example they tended not to mention Green was enslaved and Daniels leased him along with the first distillery.

Fawn Weaver. The writer who brought Green’s story to world wide attention, got a lot of access and support from the Daniels family and the company in researching the history here. And it was the Daniels family that pushed her to start the Uncle Nearest whiskey brand and purchase the site of Green’s original distillery.

I suspect they also provided financial backing and a lot of connections in the spirits industry, given how quickly Uncle Nearest ramped up.

Apparently the Daniels family is still close with Nearest Green’s descendants. And the Jack Daniels company is partnered with the non-profit Weaver started to preserve the property on a program that trains and promotes Black distillers. As well some initiatives promoting inclusion in other aspects of the alcohol business. I know the program has some involvement in Fresh Fest, and they’ve helped line up startup funding for some Black owned breweries.

Though it comes up as such. This isn’t a story of the Jack Daniels company hid this, or even profited where Green didn’t. Though his career as a distiller and association with Daniels started in the context of Slavery. Green died one of Lynchburg’s wealthiest and most prominent citizens.

Weaver’s attraction to the story seems to have been significantly driven by her amazement about how little known the story was. Despite how well documented and just out there in the open was.

You can’t copyright a product design.

There’s trade dress. But that would require this thing to actually be whiskey, or at least a food product. And Evan Williams, among other brands, uses near identical trade dress. It’s not original to Jack Daniels either.

I have that damn toy!

It is still sitting on my kitchen island, and has been there for literally years. I refuse to give it to the dogs because a) they’ll destroy it in a day and b) It will make an ungodly amount of noise until they do. Seriously, the squeaker in that thing is ridiculously loud and piercing. I bought it for shits and giggles, tested it, and decided “nope. Too annoying.”

Now I’m glad I didn’t let them have it. Might become a collector’s item.

Any time you see someone ask for whiskey in a movie, the bartender pulls down a familiar square black and brown bottle. The difference here is that Jack Daniels didn’t get a piece of the action from the toymaker.
Not that they deserve it, but bigger lawyers - justice in cases like this, a lot of the time.