Klingons, Goblins, Dwarves and Gungans - Racism and the pitfalls of SF & Fantasy

I wanted to hive off a topic from the Antisemitism thread, because although worthy of discussion, I don’t think it is of comparable importance to the main discussion there. Also, while antisemitic stereotypes are one potential set of distasteful themes that one may encounter in SF & Fantasy, there are others, too, that the unthinking author may slip into, or that the reader may detect. So to kick off:

Stereotyping itself is a problem. People complain when it exists, that it is not flattering, that it is reductive and simplistic. Yet they also complain that not making educated guesses about “types” of people betrays insensitivity. The tricky balance is that using categories is really efficient and expedient - but only if they are shared, to an extent. If I agree that PeopleX have a different culture and experience, but can’t agree upon how they do, this also upsets people. Even if one listens, empathizes, and sincerely appreciates the similarities and differences - there will still be some upset if one does not draw sufficiently general conclusions from this.

The notion that some traits are positive or negative is also a problem in itself. Some people and/or cultures appear to be eager to judge. So anything that is noticed is perceived to naturally convey a value judgement. This is where caricature becomes difficult. When does picking up on my most obvious traits amount to reducing me to those traits? Does a recognizable visual or vocal shorthand need to convey a judgement at all about the traits represented? Obviously these practices have been used to harm groups, but I think that like troubling words and epithets, it comes down to intention more than anything else.

So, relating to your third question - I think it depends. I think that there is an obligation to avoid reducing groups of people to caricature just to make a point, or ease of storytelling. Because it affects people, and it’s lazy. But it can be useful on a more “meta” level, of criticizing the practice of stereotyping. In real life, it takes a bit of knowledge and effort to attempt a sensitive portrayal of a race, ethnicity, nationality, etc. But it is still not very creative to simply put forth some fantasy people as “Space Jews” or “Dragon Rastas” or whatever. Since people are pattern-matching organisms though, I think that people will often still see parallels when they aren’t intended. This then requires some theory of mind to know how your fictional people may be interpreted as stereotypes and either avoid or subvert that process.

YES it is possible to depict the truly non-human, for most practical purposes. This has been a problem for me over four decades of reading science fiction. The problem is that what most people seem to want from characters and plots in literature is to be relatable. So you give them some visual or cultural quirks, but their motivations and responses need to be at least about 75% human (another stereotype) or readers violently lose interest. Not unlike with experimental music and film, they like it to inject enough novelty to keep things fresh and interesting, to play with their expectations rather than disregard them entirely.

So this is why we recycle the same tropes from human cultures in genre literature. People can handle only so much originality. And everything else is going to remind somebody of already existing people. As a xenophile (spell check asks if I mean xenophobe instead…) I would very much welcome more stories which made an effort to invent new cultures and organisms.

I would very much welcome more stories which made an effort to invent new cultures and organisms.

Is it possible to find negative traits to attribute to people or characters, that haven’t already been co-opted by some racist or other? If you duplicate those characteristics are you automatically buying into the racism too?

It seems relevant here that a stereotype usually involves a bundle of traits(usually some vigorously negative ones; often some positive, neutral, or simply aesthetic/flavor stuff as well); so while it would be a pretty tall order to come up with a vice so genuinely novel that it hasn’t been incorporated into somebody’s stereotype by now; you aren’t really tapping the stereotype unless you start veering toward suspiciously similar trait bundles.

It’s the difference between a (potentially unimaginative and lazy; but not obviously stereotype-affirming) Always Chaotic Evil or Planet of Hats; and a full-on Space Jew.

If a given fantasy race/sci-fi species is particularly amenable to drifting into space jew territory; that isn’t a good sign, since it suggests that the characterization is flat, all the members of the race/species are lazily similar for no terribly good reason; and the in-world stereotype is so boring that people import the closest real-world one just to add color and texture; but writing something so uninteresting that people rush to replace it with a nice, organic, stereotype is a different sort of authorial deficiency than importing one yourself.

It is possible to depict the truly non-human anyway - without resorting to broad-brush ‘race X does Y differently’ characterisations? Any nuance would surely be outside of human experience and difficult to convey?

That always strikes me as a cop-out. SF is first and foremost about pushing the boundaries of human experience. It’s a large part of SF’s appeal to me, and I’l be the first to admit that most of it doesn’t live up to the promise.

A couple of decades ago, I set out to make a non-Tolkien Fantasy setting for my gaming group. No dwarves, gnomes, orcs, or elves. I worked to the best of my ability as the GM to build out a world that had none of the “default” Fantasy tropes.

We never even got a first round out of the way. Out of the six core, members, only four really tried to build out characters and the group never got invested enough to jump on it. I had a reasonable amount of world building done and was really disappointed when we could never agree on a time to kick it off. The only feedback I’d gotten was from one of the two guys who wasn’t interested. He just wanted to game and not have to remember all this “new stuff.” He liked being his usual Fighter/Ranger/Brick character and playing that character.

He just wanted to game and not have to remember all this “new stuff.”

I seem to remember quite a few settings that tweak and discard the usual tropes. Not that they’re exactly playable, but… 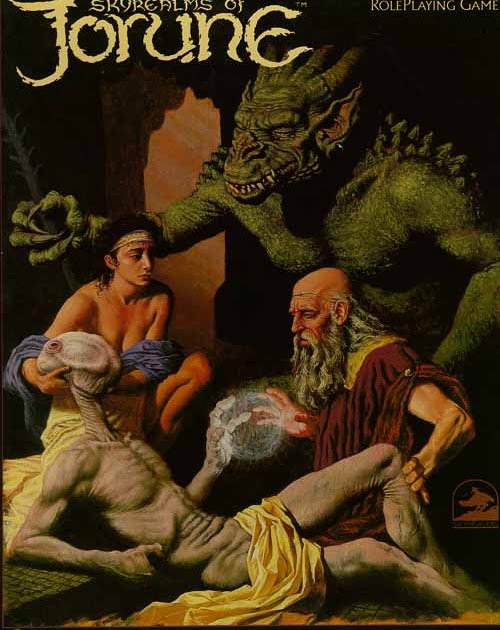 Chances are good that, if you read Dragon during the Silver Age , you remember Skyrealms of Jorune . You never played it, of course -- I'm ...

This is why all games now come with at least the number 2 at the end of the title.

Is it that racist themes appear in fantasy races, or is it just that crude stereotyping pervade both the genre and racism?

IMO Both. It’s lazy-ass writing but some stereotypes are really deeply ingrained into the cultural thingy, so even if the writer is not being explicitly racist, the caricature can come together because certain elements “just feel right together”, so you end up with any one of the standard SF/F cookie-cutter elements.
Which doesn’t make it any less racist or fucking lazy.

If you duplicate those characteristics are you automatically buying into the racism too?

Not necessarily, but if you’re not paying attention you can add one element to another and end up with (insert racist trope here) entirely unconsciously and wihout malice. Which again, doesn’t make it less racist.[quote=“AnonyMouse, post:1, topic:99018”]
Do authors have a responsibility to avoid descriptions that come across as racial stereotypes
[/quote]

If they want to avoid looking like racist fuckwits, then yes. It’s not obligatory, because people like familiar stuff and some tropes are very familiar. But it’ll avoid a lot of tedious explanations if you do.

It is possible to depict the truly non-human anyway - without resorting to broad-brush ‘race X does Y differently’ characterisations?

Maayyybe. Not my sort of read, to be honest. If you can’t convey in human terms what a non-human is like, it’s gonna be a pretty shit read unless you’re real good at what you do. Most authors just ain’t up to that.

As as we’re on the subject of SpaceJews…