If you think she is going to adopt anything that looks like Sanders platform or make a lot of positive changes as president, I am afraid you are going to be let down in 4 years or so.

I’m talking about the elements of Sanders’ platform that have been adopted as part of the Democratic platform, and the changes to Clinton’s platform that she’s adopted, as well.

You can assume that she, and the Democrats, are constantly lying about everything in their platform, I suppose, but that’s a weirdly defeatist attitude. Why give up before something has even occurred? Why not take a positive, constructive approach to people who give you reason to hope?

On the eve of the event, paranoid outlaw crypto-justice trolls Wikileaks
released thousands of hacked emails that told the world what most of us
already suspected: that parts of the Democratic National Committee were
scheming against Bernie Sanders from the get-go.

From the “get-go.” When was that? The story I saw said that the very few emails going after Sanders were written in April of this year. If only April were the get-go!

I looooove this article.

[QUOTE]
The problem is that ordinary decent people around the world have had thirty years of lesser-evilism, and they’re sick of it. Hilary is not talking their language. Trump, lying through his lacquered teeth about bringing back union jobs, just might be.
[/QUOTE]

If the Hillary campaign wants to dismiss this, it’s going to be America’s funeral.

If she can actually veer a bit left and Do The Right Things, stop trying to push the Trump Is Evil narrative, and give us something to vote for, she can maybe overcome the more reasonable of the progressives.

She’s made small steps in the right direction…sounds like after this convention, it’s time for some big ones.

Why you so lazy?

Stein’s stance is far from anti-vaccine, it’s pro not-for-profit healthcare and pro restoring the trust in science as a discipline instead of trusting men in fancy suits telling us what is and isn’t safe.

I am not sure how some people are calling her answer confusing. She says clearly that vaccines save lives and we need to restore trust in them to the American people.

I guess people what read what they want to read because what’s happening now is, Hillary Clinton supporters know that they are going to lose a significant amount of Sanders supporters to Stein, so just as they did with Sanders, they must now demonize Stein. 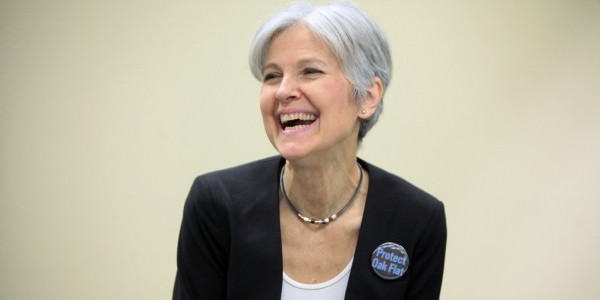 Sorry Clinton supporters but Jill Stein is not an anti-vaccine presidential...

There are a few stories going around about Green Party presidential candidate Jill Stein being anti-science, and worse, anti-vaccine. This is nothing but pro-Clinton fear mongering at best.

I think the best summary of the clusterfuck that is this election was made by Trevor Noah: We have two candidates that are each running against the only person they could possibly beat.

The public option. Debt free college. These are just two of the Dem platform items that Bernie forced on Hillary and the centrists. That’s hardly a loss for progressivism, even if Dems are craven, Hillary is a hawk, the state’s powers of surveillance and warmaking continue to expand exponentially. It’s sad to see substantive gains go unnoticed among the general malaise and sense that Dems aren’t much more than corrupt corporate types.

Let’s form a nonpartisan SuperPAC that pushes for Constitutional Amendments that:

We can use Gofundme or similar to raise money for the SuperPAC.

Nobody likes our political process in this country. So many Republicans hate Trump; so many Democrats hate Clinton. Now is the time to change it.

Since Sanders got a lot into the platform, Clinton has now made these campaign promises:

That’s a brief list. Sanders couldn’t get everything he wanted in, but he shoehorned in a lot. While I have no expectations that she’ll live up to all, or even many things on that list, I’m glad she’s adopted those things as campaign promises so that she can be hammered for as long as she’s not living up to them, since Bernie’s given everyone the leverage to press now. No saying whether she’ll live up to her promises, but at least she’s made them, and has something to be held accountable to, which can make a difference.

The public option. Debt free college. These are just two of the Dem platform items that Bernie forced on Hillary and the centrists.

Yeah, but only as part of a non-binding platform that she and the centrists (read: republican lites) would simply ignore once in office. She’d also likely push through TPP, ramp up military spending and killing, do next to nothing about the racist mass incarceration system and the steadily declining standard of living for most Americans . . . ugh, it’s too depressing to go on.

I suspect a lot of people this year will be voting against someone this year rather than for someone, which is sad. I think the solution is to create many more viable political parties and to switch to an IRV voting system. Otherwise a lot more people will be wearing this shirt: https://teespring.com/vote-for-lesser-evil

the email release showed how the DNC was favoring Hill through out the primaries. No surprise. But I wonder how much further back it goes? I was always puzzled why there weren’t more people running for president on the Dem side. I think it’s entirely possible that the DNC used the prospect of support for/ non support for candidates running for Congress as a way to keep people out of the race to clear the path for Hill.

I know, I know. I am a bit rosier about some of the platform’s prospects. Dunno, I swing from rank cynicism to actually believing their rhetoric, as when, last night, Obama told me to “get in the arena with Hillary” and hold her feet to the fire, or something. This from the Lincolnesque Sphinx who gave us Geithner, surveillance on crack, an empire of drones. And I bought it, I felt and still somewhat feel that the Dems are ultimately more amenable to republican values and whatnot, and can even be worked with. Foolish me I guess!

Yeah, but only as part of a non-binding platform that she and the centrists (read: republican lites) could, but has no reason to simply ignore once in office. She’s not likely to pass TPP given her VP’s rejection of it, ramp up military spending and killing, will hopefully take action about the racist mass incarceration system and the steadily declining standard of living for most Americans . . . ugh, it’s too depressing to go on.

No saying whether she’ll live up to her promises, but at least she’s made them, and has something to be held accountable to, which can make a difference.

Campaign promises are made to be broken, but with Bernie (and Warren) still in the Senate, some of 'em could be passed even if she, personally, isn’t all that into it.

According to this thing, there’s at least one more progressive-minded candidate on the Senate ballot to be likely to be inducted (Wisconsin’s Russ Fiengold, AKA: The Guy Who Voted Against The Patriot Act, is up again!), and a lot of 'em on path for a toss-up (It’d be great if “little Marco” could be chucked out of office, too!).

Sanders was never going to do this alone. GIVE HIM ALLIES. Find states that are toss-ups or light-leans and go donate to some candidates and volunteer some time.

Please enjoy then my quote-of-the-day:

If we do not have serious social change it is likely the Trumps of the world will just keep coming right out of the social conditions the Clintons of the world have created.

I’d rather have rose colored glasses on than welding goggles to wear as the world burns.

I like hope. I’m naive as fuck. But I like to hope that things will get better and that when people say things, they sometimes mean it. I find that’s a better way to go about things than cynically assuming everything will suck forever.

I’m almost positive that he thinks if he repeats the same thing over and over, it will suddenly change reality and Bernie will be the nominee rather than Hillary.

If he really wants to blunt either one of them, he needs to vote in local elections and change the composition of Congress to something that’s not so…nuts?

I mean, neither Party is actually steak, amirite, but only one is Trump Steaks, or Stakes.

I find that’s a better way to go about things than cynically assuming everything will suck forever.

I’m sorry that I’ve led you to misunderstand me. I don’t lack hope. I think, for one thing, that Sanders may well have pushed the ball of progress further down the road and increased its momentum as well. But I sure as hell am not going to pretend that I don’t see Clinton for what she is and what she’s very likely to be. What I wish is that more of the people voting for her had a solid sense of what they’re very likely to get.