(TW: sarcasm) Wow, what a great idea! Why shouldn’t we codify into law that there will only ever be two specific, official political parties?

The fact that this bill is wildly unlikely to pass doesn’t make it laughable: it makes Congress irredeemable.

Not really: this is a pretty clear cut case where the authority to manage voting belongs to the States, and so that is where this battle should be fought. Incidentally, CA has already done this, with good results. Obviously places like Texas are terrified of this happening, and the current Republican congress is entirely a produce of Gerrymandering (they lost the overall popular vote by a good margin), but practically the fight will have to happen there.

It’s instructive to look at how other countries have solved this problem, or attempted to solve it, and what the results have been. Apparently, getting an actual nonpartisan panel to draw districts works fairly well, but there’s a bit of a chicken-and-egg problem in establishing a trustworthy one. Notably, that’s not what this bill calls for; it instead proposes a bipartisan panel, which tends to result in the preservation of the status quo.

It’s a good idea but it won’t fix everything. We passed a law like this by referendum in CA back in 2010. I think it’s had a minor impact on some really safe incumbents, but it’s not like it’s been a big overnight change. The thinking was it would make more politicians move toward the center, but I don’t know if that’s really happening. Money in politics and corporate meddling is still the much, much bigger problem.

The California Citizens Redistricting Commission is the redistricting organization for the state of California. It is responsible for determining the boundaries for the Senate, Assembly, and Board of Equalization districts in the state. The 14-member commission consists of five Democrats, five Republicans, and four commissioners from neither major party. The commission was authorized following the passage of California Proposition 11, the Voters First Act, by voters in November 2008. The commi Fo...

A maximum perimeter-to-area ratio of five or six would go a long way to limiting the damage done by redistricting panels, whether they’re partisan or not.

But as Ratel noted, the constitution makes this a state matter, not a congressional one, sort of opposite to the issue of congressional term limits.

Math is Hard! It turns out there’s no mathematically useful way to do redistricting; you can fairly easily identify unfair maps, but there’s no particularly good way to choose between the near-infinite number of fair maps, and if you allow a certain amount of sloppiness to make district boundaries clearly identifiable (no fractal cuts through apartment buildings, and preferably staying to geographic and municipal boundaries or at least roads), you’ve got an even larger number of nearly-fair maps with no way to choose between them.

California’s original Bipartisan Citizens Commission looked like a blatant giveaway to the Republicans, because they got as many members as the Democrats even though there are nearly twice as many Democrats in the legislature, but the Republicans botched recruiting for the commission members, and ended up in an even weaker position than they would have with the legislature, because the commission had no interest in the personal horsetrading that lets both parties maintain safe seats for their existing members. (So for instance, there were some neighboring Democrats who suddenly had primary fights with each other.)

Incidentally, CA has already done this, with good results.

What do you mean by “good results”? The only things the “independent” commission in California did was ensure that the two major parties had complete control of the process, and move the gerrymandering to a small, unaccountable group that is selected by the State Auditor and approved by the legislature. And it should be obvious that both major parties are perfectly happy with this situation, since no one seriously opposed it. What truly honest redistricting wouldn’t trigger howls of protest from every incumbent?

What you’ll see from this is a small shakeout based on political maneuvering, and then a return to the incumbent status quo. It will change nothing.

I wouldn’t say both parties were perfectly happy with this situation. Instead of being drawn by partisans, the GOP minority pushed for a referendum, to create the independent commission with the hope that democratic districts would be weakened. Instead, the commission found that there just aren’t enough GOP voters in California, and so the GOP challenged the maps (ironically, under the Voting Rights Act). Not exactly the act of a happy customer.

That was just political maneuvering - the challenge was dropped in 2012:

I live in CA, and the referendum was passed in part as a preventive measure when the political climate began to aggressively change nationally. It’s because of CA’s size and different types of population distribution that the action was taken. (Large rural areas bordering densely populated urban areas make gerrymandering easy. That’s why it’s a problem in TX, and why it’s a concern here.)

CA’s mandate actually has had good results - whether you realize it or not. Population distribution on maps has been shown to be fairly equitable within the state and we’ve had changes to our officials. Not sure you guys are actually reading how the intended bill (or existing referendum) is set up.

@Taymon even said the bill, “proposes a bipartisan panel.” That’s just not true. The actual panel for the “Let the People Draw the Lines Act” Is meant to be: 5 Dem, 5 Rep, 4 Independent. (The same as in CA.) While the two major parties do hold dominance, it is no way a “bipartisan panel” and the 4 independent votes are enough to sway either major party on decision-making.

For the actual results of the change in policy, you guys may want to read the Wiki page on the subject. Just check out “Results”.

The California Citizens Redistricting Commission is the redistricting organization for the state of California. It is responsible for determining the boundaries for the Senate, Assembly, and Board of Equalization districts in the state. The 14-member commission consists of five Democrats, five Republicans, and four commissioners from neither major party. The commission was authorized following the passage of California Proposition 11, the Voters First Act, by voters in November 2008. The commi Fo...

The really difficult part is getting Americans to acknowledge that they got it wrong. Very, very wrong.

This is too complicated. Just require that every district be a convex shape.
Senator Trinity: “Gerrymander this.”

This sounds like a good idea until a bunch of internet trolls orchestrate a campaign to create a congressional district shaped like a giant boner.

There is a senate district like that already: it’s called Florida.

Back in 2013, I did a series of illustrations showing how gerrymandering is done. They do match our requirement that each district contain an equal population.
Here they are. 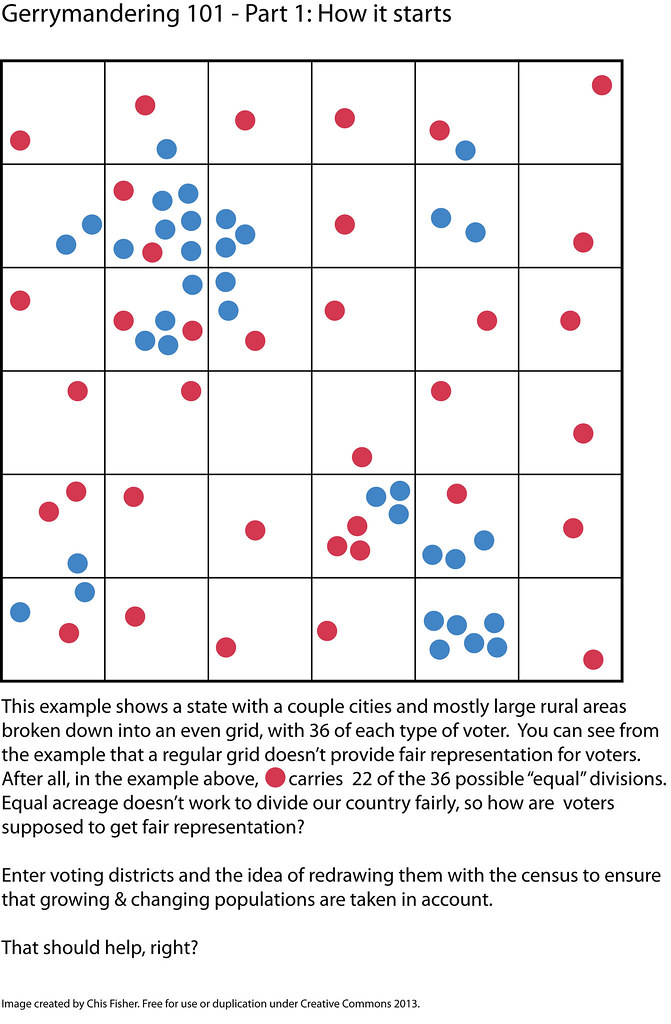 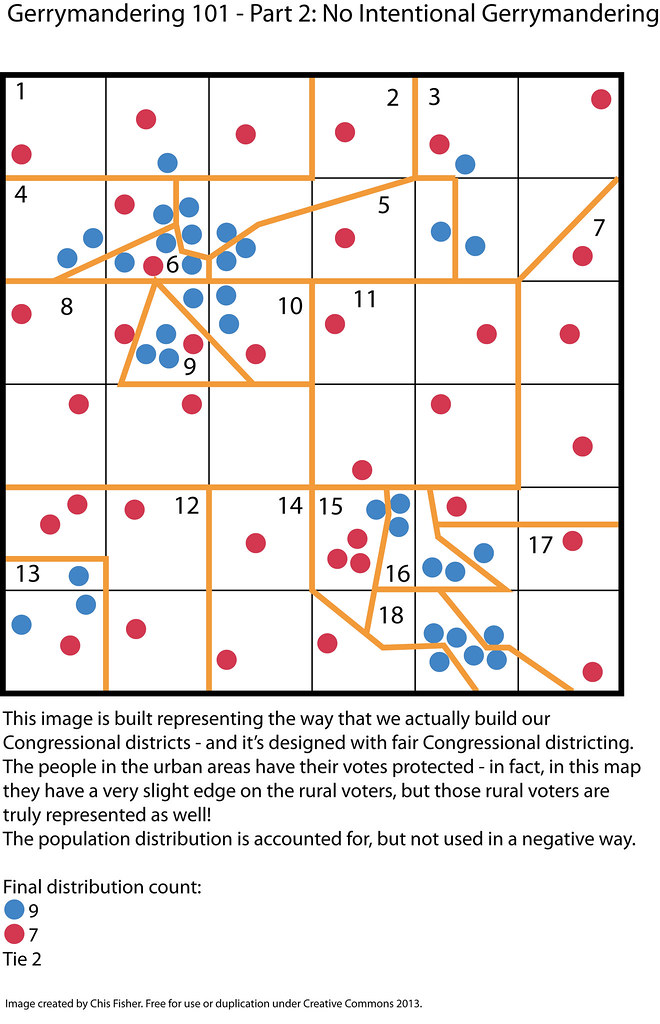 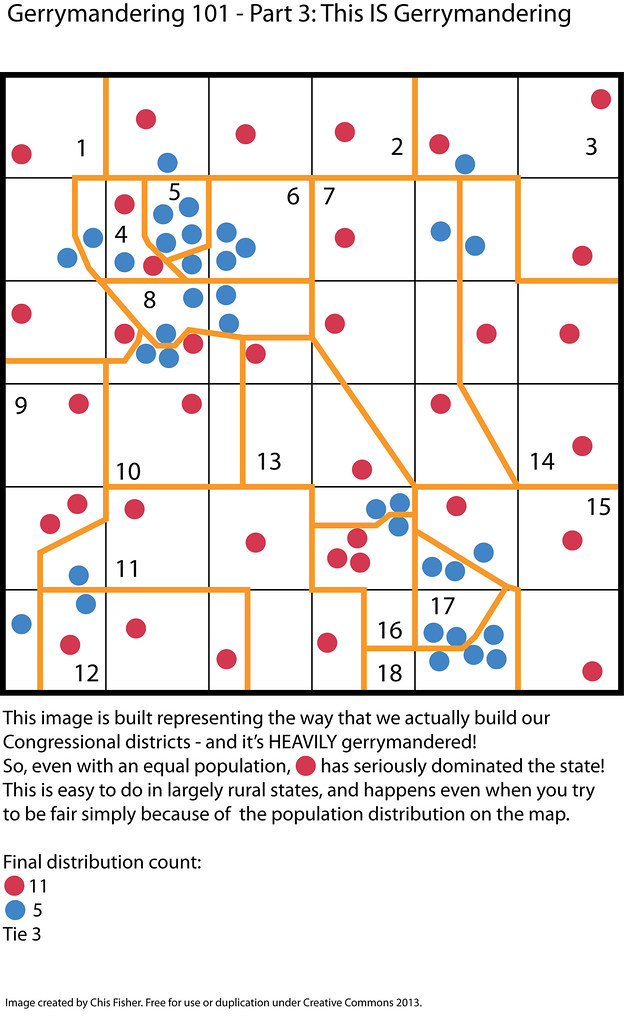 Nice. Why didn’t you post a link to this when you were arguing word usage with me in that other thread? This is a cool infographic.

To be honest, I actually forgot I’d done 'em. I made them last year for a discussion on a private Facebook group. When I made the Alice FCC/CCF image and posted it to Flickr I found 'em again. I’d already set them as Creative Commons, so they’re free for use.

I made them at the time because there weren’t any good infographics that showed the process of gerrymandering. So I wanted to provide a clear graphic that showed why people (1) don’t just use square grids and (2) have more trouble in areas with small urban centers and large rural areas (“Why is TX such a problem?”).

The graphic is set so there’s no change in the population between all three instances. Even with no one moving, changing the district borders changes fairness. In graphic 2, blue has a slight advantage with 9 districts, but that’s met with ties (red wins 7 and can add 2 more, so red can tie blue). It’s considered a “fair map”. In graphic 3, red has a marked advantage - because 5+3=8 (blue plus ties) still doesn’t equal red’s total of 11. It’s always a losing game, and is designed to predict an outcome.

In theory, the House of Representatives could be elected as a pool per state, instead of per district. Parliaments that use this system have to have strict rules in their constitution, though, about what constitutes a political party. And that is one thing that is missing from the constitution of the USA.

States could do this, by putting all candidates on a single list, and voters then have as many votes as the state has representatives. The role of political parties in this case would be to recommend groups of candidates. German elections for example are like this. But a system like this would open the doors to smaller parties, and both e Democratic and Republican parties would fight tooth and nail to prevent it.