Living in an 84-square foot house

The author at home: 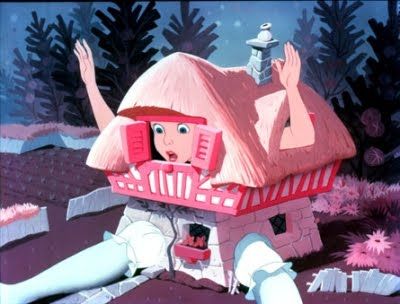 I’ve noticed something odd about my gut-reaction admiration for these sorts of homes.

Let’s face it, they just look so charming, and they get so much attention for being so small and tidy. Yet when you stop and think about the appeal of the home, really the thing that makes it work is the gobs of surrounding open space.

If you take dozens of these exact same little houses and build them in tightly spaced rows and columns (and perhaps even vertical stacks), suddenly it becomes supremely dystopian. A single little house is “charming”. Masses of them crammed together is a prison camp.

If you take dozens of these exact same little houses and build them in tightly spaced rows and columns (and perhaps even vertical stacks),

We call those apartment complexes.

I get the whole simplify your life by downsizing thing, but why custom-build a small house instead of just getting a trailer?

The problem is all 300 things would be books.

OK, maybe I’d sacrifice a book for one pair of pants.

If you know you’re dying of a medical condition, why not rent or buy a small apartment near to your doctors and hospital? No upkeep – inside or out – and you’re not dependent on a car to get you places.

Yes, but “book collection” is one thing.

here she is on Peak moment TV

And for roughly twice the price, you could have four times the space. These microhouses go beyond the point of diminishing returns unless built of recycled materials. Too often they are just absurd design student projects with $4,0000 kitchettes which could have have been scavenged from an old popup camper for nothing.

It’s easy to live the simple life when you don’t have a significant other, or kids. There are grizzly men who live out in the woods in Alaska that have even less. She’s built herself the quaintest bachelor pad ever.

And for roughly twice the price, you could have four times the space.

Clearly this woman isn’t interested in having more space or more stuff. Part of the reason she chose to live in a tiny house is that she can clean the whole thing in 10 minutes.

Go with a Kindle then - that way you don’t own any of the books! A license that can be revoked at random doesn’t count, right?

I wonder how much the land cost, and how far it is to things like the grocery store? I always figured buying land and building your own house, even a tiny one, was prohibitively expensive, otherwise everyone would do it. Guess I’d better get the book.

It’s left her with more time to spend with family and friends […] or watch the clouds and sunset while drinking a beer on her (yes, tiny) front porch.

You’re completely missing the point. If “how big a house can I get for the money?” is your question, then this isn’t the type of house for you. And that’s okay - one size does not have to fit all.

I believe it’s essentially set up in someone else’s back yard. Maybe she pays rent, I don’t know. But it’s not her own land.

It’s probably cheaper than buying the land and building a regular size house, although not proportionally to the size of the house (a 1/10 size house will still probably cost 1/3 of what the normal house would–a lot of costs are fixed). You’re going to have some costs that a normal house won’t, like having to get an architect to draft up the whole thing instead of just grabbing an existing design off of the shelf and maybe tweaking a couple of things. If you ever want to move it’s probably going to be harder than normal to sell, because such a small house will be impractical for a lot of people, and the kind of people it would be practical for are usually looking for apartments in the city instead.

It’s on a wheeled trailer. She doesn’t need to sell it to move, just find a new place to park it.