I can’t figure out from watching that whether Lou Reed is really, really uncomfortable, or if it’s just part of the bit.

Maybe refusing to high five was his way of maintaining a shred of dignity amidst an idiotic corporate-comedy wankfest.

I thought it was kind of insulting that they didn’t even acknowledge the existence of the bass player. They easily could have worked that into the bit (Reed could have expressed some relief when he came out, or whatever), but instead just chose to ignore him.

I love lou reed but admittedly haven’t really listened to anything he did since the 80s. Or really anything live. The thing that strikes me here is how, although his voice still sounded good, he’s completely changing/improvising a different melody to a song that is so iconic in my head - I’m so used to the melody on the famous recorded version that the difference is kinda hurting my brain.

He had a great run from 89’s New York through 2000’s Ecstasy, And was fantastic live.

If you are into improvisational avant-garde noise stuff, and are in the NYC area, check out the listening room at NYPL’s Lou Reed exhibit, which has a live recording of the the Metal Machine Trio (Lou, Ulrich Krieger, Sarth Calhoun, and John Zorn) that sounds like you are at the show.

But thanks for finding something to like about this skit. Other than that, @milliefink’s description sums it up for me.

Wow, that’s promising. If, that is, they don’t sound anything like that eponymous Lou Reed album!

I kinda thought that was their point.

I quite like the album although as far as horrible noise goes, I do like it a bit more varied.

I thought it was kind of insulting that they didn’t even acknowledge the existence of the bass player.

Speaking as a bass player: Trust me, we’re used to that.

Wasn’t that one of those “Just to fulfill the end of a contract so i can get the fuck away from this shit record company” albums?

If so, it’s pretty dumb luck that some people actually like it!

Lou Reed has told so many different stories about that album it’s hard to be sure what he had in mind. (Of course he was on quite a lot of different drugs at the time of making so he may have had many different plans.)

Actually on looking it up online, I see that the Metal Machine Trio does take its name and inspiration from the album, but may not be exactly like it. But the album has inspired live cover concerts which Reed participated in this century, so if it’s all a joke it’s certainly a long running gag.

At the start of the MM 3 show, he says something like “the fact that I’m still doing this 30 years later should be clear that it wasn’t a joke. And it wasn’t intended to break my record contract. Oops.”

Not that I think 2000s Lou is the definitive authority on 70s Lou.

That was bleeding awful. Really seriously uncomfortable to watch

It was like the very worst of each of those comedians’ schticks.

Except for Adam Sandler, whose awful performance was at the dead center of his skills. He’s never been any better than that, and maybe couldn’t get worse.

I thought it was a comic book band… 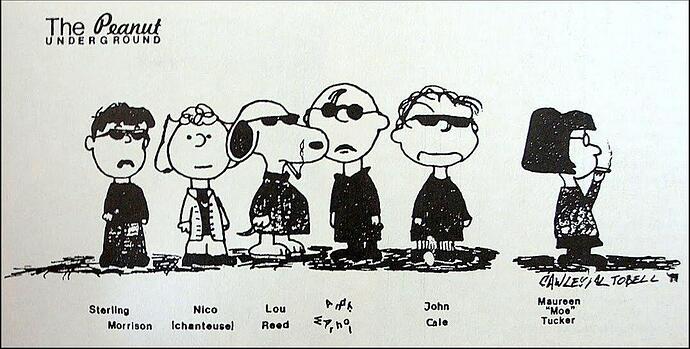 The fun cartoon above was apparently found in a 'Guide to the Velvet Underground and Andy Warhol's Factory' published by the French magazine, Les Inrockuptibles in 1990.

Wow. Marcy as Moe Tucker feels like one of those things I always knew but didn’t know I knew. “Huh. Of course…”

There seems to be a level of fame where many comedians start to assume that their presence makes something a good joke. This is a perfect example of that.