Math denialism: crypto backdoors and DRM are the alternative medicine of computer science

Just one problem with that analogy: unlike backdoors, alternative medicine isn’t actively harmful. An appeal to nature is an argument or rhetorical tactic in which it is proposed that "a thing is good because it is 'natural', or bad because it is 'unnatural'". It can be a bad argument, because the implicit (unstated) primary premise "What is natural is good" typically is irrelevant, having no cogent meaning in practice, or is an opinion instead of a fact. In some philosophical frameworks where natural and good are clearly defined in a specific context, the appeal to nature might be valid an

An unusual cause of hypokalemic paralysis: chronic licorice ingestion.

Long-term licorice ingestion is a well-known cause of secondary hypertension and hypokalemia. Nevertheless, its initial presentation with a very severe degree of hypokalemia and paralysis is exceedingly rare. We report an elderly Asian man who presented to the emergency department with marked muscle weakness that progressed to paralysis. His blood pressure was 160/96 mm Hg. The major biochemical abnormalities were hypokalemia (plasma K+ concentration, 1.8 mmol/L) and metabolic alkalosis (HCO - 3 , 36 mmol/L). His renal potassium excretion was higher (transtubular potassium gradient of 9). Plasma renin activity and aldosterone concentration were suppressed and cortisol concentration was normal. A detailed history revealed that he had ingested tea flavored with 100 g of natural licorice root containing 2.3% glycyrrhizic acid daily for 3 years. Note that renal potassium wasting and hypertension persisted for 2 weeks after discontinuing licorice consumption along with KCl supplement and spironolactone. Long-term licorice ingestion should be kept in mind as a cause of paralysis with an extreme degree of hypokalemia to avoid missing this recognizable and curable medical disorder.

Fulminant hepatic failure associated with the use of black cohosh: a case report.

With data from the Women's Health Initiative indicating that estrogen plus progesterone are associated with an increased risk of cardiovascular events, many patients and practitioners are looking for alternative therapies to manage menopausal symptoms. One alternative is black cohosh, an herbal product used primarily to treat these symptoms. In recent years there have been several case reports associating this substance with hepatitis and fulminant hepatic failure. We present a case of a woman who developed hepatic failure requiring liver transplantation from the use of this herb.

Next thing we know, they’ll try to legislate the value of Pi The Indiana Pi Bill is the popular name for bill #246 of the 1897 sitting of the Indiana General Assembly, one of the most notorious attempts to establish mathematical truth by legislative fiat. Despite its name, the main result claimed by the bill is a method to square the circle, rather than to establish a certain value for the mathematical constant π, the ratio of the circumference of a circle to its diameter. The bill, written by amateur mathematician Edward J. Goodwin, does imply various inc...

(Yes, I know that the nominal purpose of the bill was to recognize a method for squaring the circle, but implicit in that (flawed) method was the value of Pi being set at 3.2)

It IS if the patient decides to forego conventional medicine.

/or if the grapefruit juice changes your pills’ effects.

Right, nobody delays treatment that could could have saved their life because of taking alternative medicine

Yes, I know that the nominal purpose of the bill was to recognize a method for squaring the circle

I did not know that. Of course, that’s also wrong/impossible — at least with ruler and compass constructions — and was known to be impossible at the time.

So we risk wasting precious time on magic or outright fraudulent security instead of scientifically sound solutions?

I don’t know if you can say “been already doing it for decades” is exactly a risk as much as a done deal.

“The thing all these issues share is that the relevant scientific communities view them as settled questions: vaccines don’t cause autism, humans are warming the world, you can’t make a copy-proof bit, and you can’t make a backdoor that only good guys can fit through.”

You forgot one: you can’t triple stamp a double stamp.

Chris Hedges summed this all up in 2010. Although this book is perhaps not as lucid as it could be, his conclusion that (climate|vaccine|math) deniers are really just “reality deniers” is still apt.

"In The Republic, Plato imagines human beings chained for the duration of their lives in an underground cave, knowing nothing but darkness. Their gaze is confined to the cave wall, upon which shadows of the world are thrown. They believe these flickering shadows are reality. If, Plato writes, one of these prisoners is freed and brought into the sunlight, he sill suffer great pain. Blinded by the glare, he is unable to seeing anything and longs for the familiar darkness. But eventually his eyes adjust to the light. The illusion of the tiny shadows is obliterated. He confronts the immensity, chaos, and confusion of reality. The world is no longer drawn in simple silhouettes. But he is despised when he returns to the cave. He is unable to see in the dark as he used to. Those who never left the cave ridicule him and swear never to go into the light lest they be blinded as well.”
― Chris Hedges, Empire of Illusion: The End of Literacy and the Triumph of Spectacle 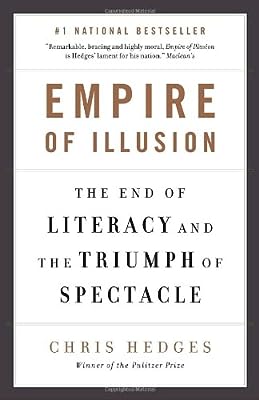 Empire of Illusion: The End of Literacy and the Triumph of Spectacle

Pulitzer prize–winner Chris Hedges charts the dramatic and disturbing rise of a post-literate society that craves fantasy, ecstasy and illusion. Chris Hedges argues that we now live in two societies: ...

…you can’t make a backdoor that only good guys can fit through.

Sure you can. Just ask all users to verify their goodness by asking a series of tough moral and ethical questions. Good people will have no difficulty - their gut reactions will always be right. Bad people will wrestle with the issues long enough to allow the guards to capture and imprison them.

That is not fair Cory. I expect a more open mind from you. Alternative medicine is what I use. When I have a problem I ask myself these two questions: “do you want heavy drugs with lots of side effects that also cost a lot? Do you want to have something cut off or removed?” Then answer for me is always no so I stick with alternative medicine. Western medicine is run by pharmaceutical companies and other greedy types. I stay away.

That’s not the only problem with that analogy. The human organism still has a few mysteries inside it, and alternative medicine represents an experiment in throwing different probes at the puzzle. Quacks can take advantage of the places where trusted medicine sticks to its scientific roots and tells the patient, “we know that we cannot help you”.

In contrast, the tissues and organs and interactions of the internet are entirely human designed, so we can say with much more certainty that the woo-woo will not work.

I understand and agree with Corey’s message here, but his metaphor is a very poor one.

“do you want heavy drugs with lots of side effects that also cost a lot? Do you want to have something cut off or removed?”

Oh I go with “cut it off” all. the. time. AND I drink licorice-infused-pine-root and clay-vaginaball tea: it’s the best!!!

While what you say is uh. Somewhat true it’s definitely not entirely true. There’s a lot of “alternative” medicine that has been proven bunk but people still go to it because placebo. Placebos make these things seem like they might be working a lot of the time. Sure, SOME alternative medicine appears to have been proven at least slightly medically valid (acupuncture for example seems to have some studies done that suggest it can help with pain more than a placebo) But things like homeopathy…? … … yeah no.

EDIT: Realized I should link back to the original story in that this is a perfect example of why they ARE kinda connected. People are convinced they work even when there’s little to no evidence (or evidence against!) alternative medicine works. Same thing going on with crypto back doors. People are convinced they can work and be safe… when really… they can’t. At all. 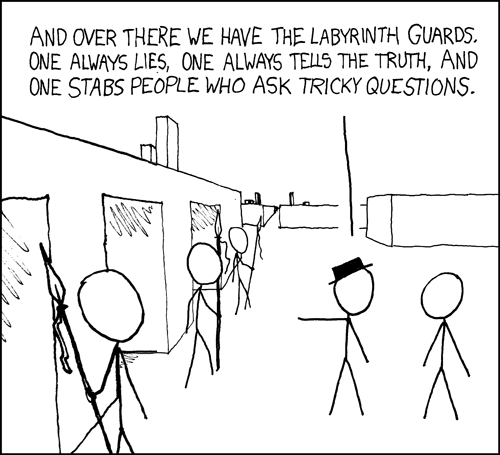 And the whole setup is just a trap to capture escaping logicians. None of the doors actually lead out.

Interestingly, some DRM on PC games is beginning to become very difficult to crack: http://www.gamesindustry.biz/articles/2016-01-08-just-cause-3-prompts-despair-among-chinese-pirates

So while the DRM on Just Cause 3 isn’t uncrackable, it looks like it’s sufficiently difficult to be effective - for now.

So while the DRM on Just Cause 3 isn’t uncrackable, it looks like it’s sufficiently difficult to be effective - for now.

There’s also the possibility that DRM authors reached out to the hacker group. And informed them that there’s far more money to be made publicly declaring a DRM system to be uncrackable, than in cracking a few games.