Moral panic article from 1984 about the demise of slide rules

Originally published at: Moral panic article from 1984 about the demise of slide rules | Boing Boing

I’m just old enough to know what a sliderule is while not being old enough to have ever used one. I’d like to own one for the same reason I’d like to own a sextant. They can be very beautiful devices and look like fun things to play with and learn about but I’d never want my life to be dependent on my knowledge of their use.

I think that having a teacher show the relationship between numbers looks like with a demonstration on the use of a slide ruler would be useful, but if i was a teacher i would not expect students to actually get invested in using it over a calculator

I sort of remember this, but I didn’t really learn to use the slide rule until my last year in high school, which was 1970. At some point someone stole my slide rule and I finally got a calculator. Doing advanced algebra and calculus tho it didn’t really help much.

We had a math teacher around 1983 who mandated slide rules for his class. Only time I ever used it, and have never used one since. The people who need to program the computers seem to be doing just fine without slide rules these days.

I used some slide rules for fun back in college but calculators were standard by then (HP 41CV got me through a lot). I did have a first semester physics professor who decided calculators were ruining us so we had to take all his tests without one, using only long-hand math. What a pain in the …

Maybe we did lose something when we moved from slide rules to calculators. We lost a visceral understanding of what it’s like to manipulate numbers, but we gained so much more.

Consider how humanity chanced when we moved from memorizing epics to writing them down. Minstrels needed to have an unbelievable amount of memory to recite these poems. Very few people these days have a memory like that. Our minds have gone to mush in a way. That being said, I prefer what we have now.

A few of our high school math classrooms had this 8’ long slide rule mounted above their blackboards. Obviously, a teaching aid. 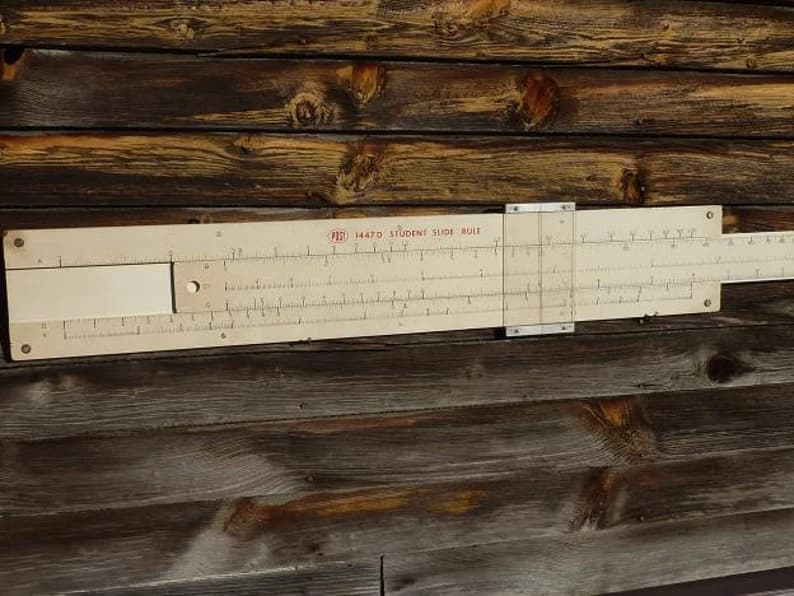 I’m just old enough to know what a sliderule is while not being old enough to have ever used one. I’d like to own one for the same reason I’d like to own a sextant. They can be very beautiful devices and look like fun things to play with and learn about but I’d never want my life to be dependent on my knowledge of their use.

I graduated from HS around the time this article came out.
I don’t remember seeing one.
Your post reminded me… When I was a kid, my grandparents would always get take out from this one Chinese place and the owner would add up the tab with an abacus, I shit you not.

I’m in my late 30’s and my teachers in Venezuela demanded us to do all work by long hand, i was never allowed to use a calculator until i got to college in the US and it felt like cheating. Never got used to using calculators

I was going to say, we stopped using slide rules in the late 1960s to early 1970s and moved to using the tables instead. Calculators weren’t cheap enough or available enough to be used by students until later in the 1970’s, so there was a gap for a while.

My Dad has an amazing set of slide rules. (Read that in the voice of Jeff Spicoli, if you’d like). And he taught me to use one in middle school or early high school – I thought it was useful to learn, at some basic level, how to use a slide rule – I think my head groks logs pretty intuitively because of it – but it’s hardly necessary.

I still double-check my calculator work by doing it manually!

I took electronics in college in the 80s, slide rules weren’t a thing but I did learn how to use one just because it interest me.

We had an instructor that gave us tests occasionally where we were not allowed to use a calculator.

He graded us on if we got close enough to finish the job. His thing was preparing us for on the job failures.

I remember one lab when one of the oscilloscopes broke, a student went to get another one, the instructor said nope, let’s figure out why the broke one is broken.

I don’t see that happening now but back then it made sense.

Back in my undergraduate days (late 80s), we had an excellent but elderly chemical engineering fluid mechanics professor. Whenever we reviewed homework problems his numerical answers always turned out just a little bit different than ours.

One time during office hours to check an answer, he opened his desk and pulled out a slide rule, and we instantly knew why his answers were always slightly off of those from our HP15C calculators.

Someone asked if he could give a little happy hour lecture on how to use it and he said “get out!” (he mistakenly thought we were making fun of him but some of us wanted to know how it worked…)

I’ve probably mentioned it here before, but in 1980 my Dad brought an HP 41CV into East Berlin to an East German physicist he’d met several years before at a symposium as a gift. There were a few pointed questions at the border about it – the Americans wanted to know that it wasn’t being left there, and the East Germans wanted to know that it wasn’t being taken back out.

Huh, I have no idea how to use a slide rule, I guess I’m in trouble. In high school we were post-calculator, but what I remember is using the log tables in the back of the math textbooks.

“Besides, what are they going to do when their calculator batteries run out?”

The only actual calculator I own - by which I mean a device whose sole purpose is to be a calculator - is solar powered. The only way I’d need a slide rule (leaving aside my phone, tablet, laptop and desktop computers) is if it was too dark to read a slide rule.

My dad had an old abacus, and the instruction manual was full of anecdotes how it was far superior to a slide rule or even a calculator. He also had one of those circular siderules that claimed to be pi times as efficient as a linear slide rule.

Around 1970 students at our community college physics classes weren’t allowed to use calculators; they had to use slide rules. This may have been to provide a level playing field for the less affluent students.

Slide rules are good to about 3 places and are still handy when you need to apply one ratio to a bunch of various numbers.