The argument kind of makes sense. I’d like a legal expert to explain to me why it’s wrong.

Thing is, they name a figure that’s big. The value of all the pirated everythings expressed in terms of first-release retail point of sale. Gazillion$.

Judge, media, public say “stupid figure. Only a tiny fraction of all those would have been actual sales, because you charge too much.” And they’d be right.

Go with a genuine low figure, stooping for sympathy. Everyone laughs and says “what a little one! is that what all the fuss is about?!!”

Judge should require they go, at the minimum, with a quantified, validated, independently verified, with some big names on it, people who can’t afford to embarrass themselves, range of figures.

Thing is, they name a figure that’s big. The value of all the pirated everythings expressed in terms of first-release retail point of sale. Gazillion$.

Actually I’ve noticed that they frequently take that a step even further by then inflating that number. So they end up with numbers that are larger than the entire revenue from films/music/games/whatever. So it’s not just a stupid figure, but an insane one.

Judge should require they go, at the minimum, with a quantified, validated, independently verified, with some big names on it, people who can’t afford to embarrass themselves, range of figures.

Except that they can’t, because there really aren’t such a range of figures. The best anyone has is pretty much wild speculation (though some of the speculation is more wild than others). The whole area is pretty under-studied, and what studies have been done, don’t tend to even remotely support industry claims, so they’re best off sticking with making up their own numbers from thin air.

Yep, that’s what the result is. None of the big financial news people here in UK ever get their hands dirty with the recording industry numbers; or at least, if they cite them, there are plenty of quote marks and “these aren’t out figures” attributions.

The whole DRM thing winds me up like nothing on Earth.

Of COURSE they don’t want to have to show actual damages. That would enter into evidence their entire pricing structure, AND they would then have to show exactly how much they were losing, per download, vs the amount asked for as punishment, and then have to defend the fittingness of the punishment. Remember that excessive fines are a no-no Constitutionally.

Defense would then be able to enter all the studies that show that piraters in fact buy MORE music, pirated items actually sell more legit copies on the market, etc etc etc.

In short, the MPAA’s entire case would fall apart.

Shorter MPAA: We need the courts to enforce arbitrarily high extortionist fines on piraters to make up for our losses, which, um, are SO great that we can’t really define them, so, up, just give us the damn money and stop asking so many nosy questions…

I’ve scanned some of those, and I totally dig it. I don’t buy anything online, well, music - I always get the hard stuff.

It’s too precious to lose.

I’d like some help to understand what is right about it myself.
I mean, if there is precedence to take it into account, what makes this situation different?
But the most important thing is that this data exists at all.
Is the MPAA looking to reduce the damages they want to extract from the plaintiff? I don’t see that they would.
Is the difference between damages that would take this data into account minimal? It wouldn’t be if they were asking for it to be removed from consideration at all.
If statutory damages are not dependent on proof of actual damages, why should they be higher than proven damages? You tell me.

But I guess that’s why WANL,OJE (We Are Not Lawyers, Or Judges Either)

Relevant to this conversation (Rob Reid: The $8 iPod)

The argument kind of makes sense.

I’m not a lawyer, but I would think that if what is being asked for is that much higher than the minimum, the defendant ought to be able to present evidence showing that what they were doing wouldn’t justify the punishment.

Awesome video, I appreciate you posting it.

I vaguely remember reading something where someone tried to figure out where one of MPAA/RIAA numbers came from and showing that it first appeared in the 80s … does anyone else remember reading this?

The $200–250 billion number had originated in a 1991 sidebar in Forbes, but it was not a measurement of the cost of “piracy” to the U.S. economy. It was an unsourced estimate of the total size of the global market in counterfeit goods. Beyond the obvious fact that these numbers are decades old, counterfeiting of physical goods imported in bulk and sold by domestic retail distributors is, rather obviously, a totally different phenomenon with different policy implications from the problem of illicit individual consumer downloads of movies, music, and software. The 750,000 jobs number had originated in a 1986 speech (yes, 1986) by the secretary of commerce estimating that counterfeiting could cost the United States “anywhere from 130,000 to 750,000” jobs. Nobody in the Commerce Department was able to identify where those figures had come from.

Here is a way to calculate your losses MPAA: The more you behave like moneyed brats the more we don’t give a fuck about ripping you off.

As I understand it, “statutory damages” = all value considerations aside the wrongdoing is considered to be “worth” that much both as a deterrent, and to simplify hard to assess actual damage.

While the amounts involved seem massively excessive the concept seems sound to me in a general sense. If you stole a bottle of whisky and get convicted do you end up paying more than the bottle cost the retailer to buy? I think so, and that seems fair enough. I am not a lawyer

But do the costs really compare?

Comparing music piracy to other crimes in Illinois ( http://gapersblock.com/mechanics/2009/08/17/seven-crimes-to-consider-befor/ ): stealing a CD is a fine of $2500 and a year in jail vs the nearly $2 million that Jammie Thomas was hit with.

Comparing pirating music to stealing a CD in Massachusetts ( http://bostinno.streetwise.co/2012/05/22/bu-student-fined-675000-for-pirating-music-6-crimes-that-will-cost-you-less/ ): first offense for stealing retail goods less than $100 is a fine of $250 maximum vs the $675,000 that Joel Tenenbaum was fined

Comparing copyright infringement not with stealing a CD, but with crimes where someone fails to pay the required amount: http://www.techdirt.com/articles/20120201/01172117619/how-does-penalty-content-theft-match-up-with-similar-crimes.shtml

How do the civil damages or penalties for the different types of such “theft” compare? Failure to pay expected money under a contract doesn’t trigger a penalty: contract law usually says that a party can recover the money she expected but not punitive damages or attorneys fees (unless parties have specifically bargained to pay attorneys fees for a breach). Failure to pay rent usually requires payment of rent to cure the default. Failure to put money in the parking meter prompts a ticket for $60. In New York City, failure to pay the $2.50 subway fare results in a maximum fine of $100. […] If we take copyright law’s maximum-penalty-to-price ratio as applied to an illegal download, and apply that same penalty-to-price ratio to the New York subway, the maximum penalty for jumping that turnstile and avoiding the $2.50 fare would be $375,000 instead of $100.

(I am not so sure that those other crimes really are similar since with places of residence or parking spots you really are dealing with a limited supply.)

Official rationale for the difference stealing vs. infringing being file sharing if I recall the rationale correctly. Not the downloading of the product, the uploading of it to others. Again IIRC in the cases you cite they were fined for “downloading and sharing”. It may only have been a few bits of data, but any time you move from stealing to enabling others to steal, or from being a user to a dealer etc you are going to get hit with harsher penalties.

All that said, I think what happened to them was draconian as fuck, so please be aware while I understand the rationale for the penalty being set higher, I do not in any way agree with it being set at the currently absurd levels and the comparison you have there highlights how the penalties are way out of line.

In the end these types of lawsuits aren’t about damages, or some poor college kid downloading (or uploading) 30 songs. They are about generating fear in those who otherwise might consider using file sharing to get their movies and music for free. To that end, there has to be something to really fear.

And I’m off to watch my totally and completely legally obtained video file named “man of steel” which must be some kind of mistake obviously.

His comment at the end of the video is interesting, considering Rob has just released his book about that very issue: Aliens who love earth music being busted for pirating it. Apparently youse Americans can buy it for 99c for a short while as well. http://www.amazon.com/Year-Zero-A-Novel-ebook/dp/B005X0K520/ref=tmm_kin_title_0?_encoding=UTF8&sr=&qid=

The Audible version is read by the always-hilarious John Hodgman (The “I’m a PC” guy). 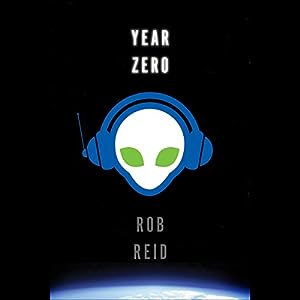 Aren’t you required to show specifically how you were injured in order to be victorious in a lawsuit?