Surely this will usher in a new era of peace and prosperity.

We’ve more or less been using nanotechnology for at least two decades, but what kind is what’s important here. Nanodust and other simple materials have been used in everything from paint to batteries. But the real target is machinery which is harder still to make. It would be like building the math, then the chemistry, then the metallurgy, then the manufacturing, then the logistics and much more to make a rocket and spacecraft to send several people to the Moon. Space travel took us more than just a half century of aerospace to develop when you take into account all the other seemingly unrelated components (like calculus) that had to be created. Similarly, nano-fabrication will probably take about the same amount of time (decades, possibly centuries) to be implemented. I would be very surprised if we got simple nano-fab off the ground for simpler machines like temperature or pressure sensors (these would have use in all sorts of use cases for any process that requires feedback). 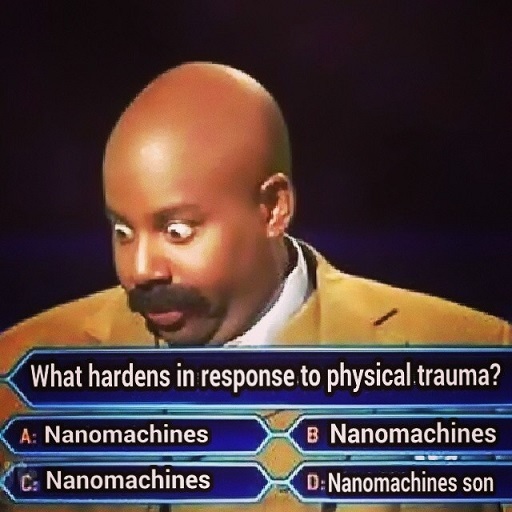 I know where this is going

How long before I can open a couple of paint cans, select the virtual model of the room I want to paint on my tablet/phone/whatever drop corresponding color swatch where I want it, then the paint applies itself to the walls overnight and I wake up to a freshly painted room?

Or maybe sprinkle some dust on my hairs and select hair length parameters for zones on my head?

Or, probably most useful, when can I put dirty dishes away in the cupboards and then the little beasties take away everything that isn’t dish or cupboard and I wake up to clean dishes? (seriously though, think of the water resources that would free up.)

Surely this will usher in a new era of peace and prosperity.

If we only worked on technology that had immediate and obvious applications to peace and prosperity, there wouldn’t be a public internet for you to snark on.

The more pressing question is WHERE ARE THE TINY ROBOTS IN A PILL THAT WILL FIX MY TEETH, ALREADY?! You lied to me Drexler. YOU LIED!!!

In a sense, we are already surrounded by(and arguably made of) nanomachines.

It’s just that most of them are called ‘bacteria’ and have a somewhat mixed track record on willingness to act in accordance with our interests. A substantial percentage of the ones currently inhabiting Dr. Feringa are probably using molecular-scale motors right now, just to mock him.

All jokes aside, the flagellum shows up as a motive strategy in a number of evolutionary lineages, with several distinct mechanisms of action independently developed, so it is likely to be an excellent resource for cribbing bio-mimetic nanobot designs; but it is something of a reminder that, for the present, ‘nanotechnology’ is still heavily dominated by biologists, with some work from the semiconductor types(whose industry can afford extraordinarily high cost per ton of product) and various materials science and metallurgy researchers trying to understand why the techniques worked out by trial and error work.

It’s just that most of them are called ‘bacteria’

IIRC, Drexler was strongly against the idea of biological models for nanotechnology. Metabolic processes are all messy and unpredictable and wasteful, driven as they are by energy gradients and random thermal agitation. We can do better!

Biology is certainly fast, cheap, and out of control; and very much counter to the glorious sci-fi nanites; but I’d be very, very cautious about calling anything that has survived a billion years of knife-fighting for nutrients in the primordial soup ‘wasteful’.

In any grand metaphysical sense all biological activity is magnificently pointless, some sort of absurdist performance art until the heat death comes for us all; but it is practically fractally red in tooth and claw when it comes to dealing with those who can’t keep up.

I already have that. They’re called ‘ants’.

but I’d be very, very cautious about calling anything that has survived a billion years of knife-fighting for nutrients in the primordial soup ‘wasteful’.

Drexler was a visionary. You can’t expect him to care about these arcane points of reality.