New US law says kids can walk to school by themselves

…Home of the terrified by TV news…

See above: this law isn’t explicitly permitting anything.

in a way this is even worse

dear $agency. we know you would love to interpret the text of the law so you can hunt down the anarchist free-ranging hooligan kids. don't do so, this is not part of the law.

I hear you. Of course, it was about +/- 10°F in Central California, but you know; same hardships.

We also lived across the street from a community college, so I often crossed with my six-year-old neighbor just to get into all kinds of trouble over there. (And did we ever! We got banned during one summer.) 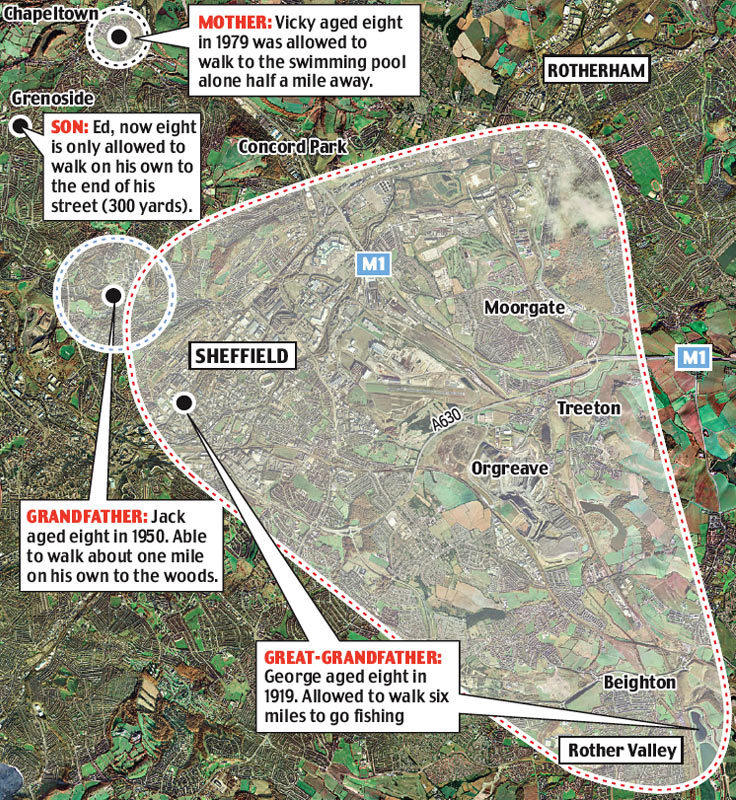 Based on this map (article) I asked my extended family about their experiences - I got different quotes (1950s to 1990s, all over Germany, everything between small villages and large cities) and all said the range was about 1 km in radius.

Only my family or a cultural thing? (I’m quite sure I discussed this elsewherenot so long ago. maybe here in the BBS?)

It might be a cultural thing these days, but it’s definitely a generational thing here in the States.

I think my parents believed in a fun childhood with a dash of self-sufficiency. Or at least that’s how I see it. While they weren’t helicopter parents, they did need to know where we were going and for how long. And God help us if we weren’t where we said we’d be.

There’s something about the fear that is so hard to override.

There are several parents who have told me that they like it when their kids are with my kids because they get more freedom than at home. In other words, they KNOW they’re being overprotective, but they don’t know how to stop it.

And then there were the parents who would insist I walk 2 blocks to the school to pick up their child instead of letting them walk home with mine…in middle school!

When my youngest was a baby, I went to a family wedding. We had been assured all sorts of things that turned out not to be true. One of the biggest issues is that there were supposed to be babysitters watching the children (don’t get me started about children not being welcome at a wedding). There were about 4 sets of parents (including me) who looked horror-struck at being told “just leave your babies with the high school girls working the motel desk; nothing is more important than getting to the church on time.” As we stood together in a cluster outside the church, we actually said to each other: “This is the sort of thing you hear about on the news, and you wonder ‘what were those parents thinking?’”

And that’s really it: so many parents are afraid that the one time they loosen the reins on their children will be the time something bad happens, and everyone around them will be saying “what were you thinking”?

This is good news. Hopefully, it encourages hesitant parents to boot their kids out the door. Our kids (3rd and 1st grade) have been walking the three blocks to school alone since kindergarten. Probably the greatest hazard they face is when a moose is in the alley, so they know another route to take if that’s the case. It’s not been an issue except for one time, when a teacher at the school raised her eyebrows after being told but all she did was sort of chuff and walked away.

But aside from negotiating federal, state, and city laws there is also school policy you might have to deal with. Our daughter’s 1st grade teacher will not let kids leave the school property at the end of the day until a guardian shows up.

I know this is going to be an issue I battle with lose for many years. I definitely support free range parenting, Mrs daneel…less so.

It really irks me how much we don’t allow kids to explore and push boundaries. There will always be people who do, of course, but I think as a society it will hurt us.

Thank you for clarifying–neither this post nor any of the articles (and I drilled down all the way to the NYPost article) spell that out.

If you need a law to tell you that’s ok, the system is already broken beyond repair…

That was poetry class.

Walking to elementary or middle school would have taken me about 50 minutes each way, 2/3 of it with no sidewalks, and I’d have had to cross at least 2 large main roads with no marked crosswalks and no walk signals. And this was on Long Island, very suburban, not anywhere rural. My elementary school had crossing guards for people who lived right nearby and wanted to walk, but for most it wasn’t a realistic option.

Edit to add: sure, maybe in the days of “be home by dinner” that would have been a reasonable amount of time to get to and from school, and I could have had friends join me, etc. But expectations change - in 5th grade I typically had 2-4 hours of homework each night, and school got out at 3:45. Even if I hadn’t had any organized after school activities (sports, clubs, etc.) that would have meant walking straight home, doing some homework, eating dinner, and doing more homework until somewhere between 8pm and 10pm every weeknight. The extra hour and a half that not walking saves really does matter.

I was a latchkey kid from an early age, so I had no choice but to walk to school without supervision. We were allowed to go all over town on our own, and no one gave us any crap about it (as long as we weren’t being jerks, of course).

Ahhh, the olden days. We never would’ve imagined that one day, being an unsupervised kid would be a crime.

“…it was brutal. one of those schools was almost four blocks away…”

You forgot to add that the walk was level – both ways!

Why don’t you arm those kids? A trusty Colt could help them fend of those packs of rabid dogs or roaming bands of raiders you expect them to encounter.

I’d gloat about my latchkey life to kids today if I didn’t feel so sorry for them. I always feel the urge to lean in and whisper: get a bike. collect your friends. find your local woods.

And then I realize that in many areas those woods are already gone.

pssst— get a bike anyway.

In the 70s my classmates and I walked to elementary school. Not that it was an ordeal for me since I lived right across the street from the school. Those of us who could make it home and back in time actually got to go home for lunch. That would never be allowed now. I also spent countless hours playing on the school playground (basically just a few basketball hoops) after hours and during the summer - something else no longer allowed.

High school was another matter. The walking option was there, but there’s no way I was walking 3 miles wearing a backpack full of books when the bus was available.

Possibly the most depressing use for Google Maps I’ve discovered is looking up a vacant lot/wooded area where my friends and I–or sometimes just my dog and I–had the most amazing adventures and discovering it’s now covered with condos.

I wonder where the kids in those condos go for fun and then it occurs to me they probably don’t get out much, which is even more depressing.