I really hope they do open up a bit more to third party software. If not, we’ll be going the xbox route, as my son is getting older and eyeing FPS and more complex racing games…

Wait a minute, this thread has gone this far without someone making a silly “the Switch is a turn-on/turn-off” pun?

If they do, they know we’ll go make them cut themselves a switch…

And from what I understand you get a lot better support from Microsoft and Sony in doing so. And an easier approval processes. Lower participation fees. Playstation 3 had, supposedly, a similar problem. The developer tools were so problematic to work with and Sony was so bad with support that a lot of multi-platform developers just skipped it. And a lot of games that should have been multi-platform ended up basically as exclusives by default. Too many resources dedicated to making the PS3 functional to follow through on porting it. So a surprisingly large part of PS4 marketing was a better developer end.

Its even more exagerated now. PS4 and Xbone are PCs. The current Xbox is even a Windows PC so cross platform, which gets you the largest possible audience, is trivially practical to accomplish. And as things like MODs, Digital Distribution, DLC and micro-transactions are moving from mobile and PC into the other consoles. Well Nintendo just announced a console based on physical media. The further they push themselves from the rest of the market hardware wise and the ancillary revenue streams that come with it. The less attractive they are to 3rd parties.

ETA: Honestly I’m really just interested in the subject because I couldn’t justify buying Nintendo consoles just for Zelda games past the Game Cube. Seriously that thing was “the Zelda” box for me. I bought no other games for it as nothing else interested me. And then it melted midway through Twilight Princess. I’d love to see Nintendo stop with the proprietary everything just so I could get even the older ones on something else. Without waiting 10 years and fighting an emulator.

Do not put away your childish things.

Taken from the JP site, here’s a supposed list of developers that they’re working with. And Unity engine? Get ready for some indie Minecraft knockoffs 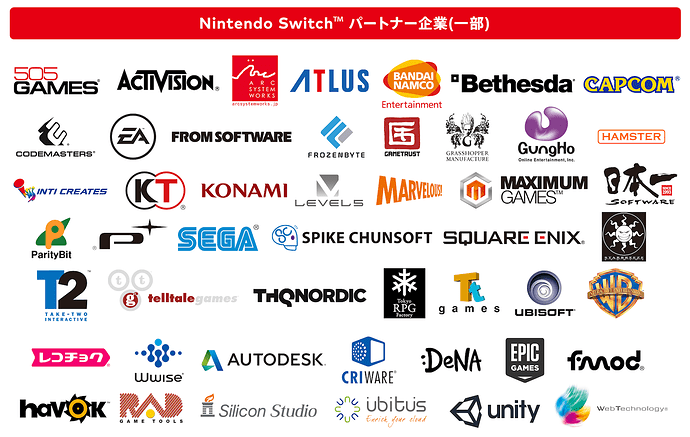 Autodesk??? AutoCAD for a Nintendo?

Autodesk provides a variety of video game design software. Learn more about products, industry trends and the studios that use our game development tools.

Yeah for some games like Sleeping Dogs the logo pops up on the intro screen, and I assume it’s to build buildings and then place them in the game world.

What about those of us that just want a living room console and don’t care about all of that hydrid-mobile-social gaming bullshit?

Hopefully they will have a fixed version, too (like the PlayStation TV was to the Vita) for those of us content to sit on our asses (or better yet have better things when when we are out with friends - like use our phones instead).

This also strikes me as a way Nintendo will ignore or otherwise screw up their take on online gaming for yet another generation.

That looks like a surprising number of your standard middle-ware and developer end horse shit. Which plays to the “will third parties hate it” aspect discussed above. Interesting.

Yeah, I assume it’s acting as a television connection with upscaling - but it’s not like it has another GPU, so it’s not really doing much for all its bulk. I suspect the biggest component in the dock is an internal power brick. Maybe the size is more about providing a stable base for docking the tablet?

Maybe it does have another GPU? Some models of the Surface Book have one in the keyboard so you get better performance when it’s docked.

I’d rather save the expense and more importantly space and have a tiny box that has all of the hardware necessary to play the games through the TV without all the other frivolous nonsense.

Monster Hunter on this thing and I might consider buying another Nintendo console. Last one I bought was Nintendo Wii (Japanese import) for MH3… The DS versions look crap, so never considered them.

AutoCAD for a Nintendo?

I assume it’s to build buildings

Maybe it does have another GPU?

It’s certainly possible, but I suspect the graphic hardware is all in the tablet to provide a decent mobile experience. I don’t imagine they’re going for 4k gaming here - they’re more about cartoonish graphics (e.g. their own titles) and last-gen console games, it looks like, as is their strength.

The design seems pretty clunky - it looks more like a prototype than finished product to me.

Nintendo has filed for a patent for exactly that, presumably that’s what’s going on. It’s pretty obvious when you look at the footage, actually: handheld-only footage is a lot choppier than on-screen.

Huh, interesting. They’re not alone in having secondary, external GPUs, but they’re generally kind of pointless and don’t work that well. Though I suppose it makes sense if the tablet screen doesn’t have a very high resolution. Still, I don’t imagine they’re going for 4k gaming - that’s not really Nintendo’s style.

If this is the replacement end of them competing in the traditional console arena and the ultimate form of a gameboy. I love it. Will this support pokemon Sun and Moon? I’m sold if it does. If not it’s probably another nintendo console I will pass on.