OLIVE: a system for emulating old OSes on old processors that saves old data from extinction

Something Microsoft or IBM should have done long ago.

This is great. However, lots of the old OSs seem to be locked up nicely, even on media formats that would be tough to read (like DecTape).

This is absolutely true. I got a small taste of this when I started archiving some old family stuff, and I realized that DVDs/CDs are not suitable storage media. Collectively, we spent about $500 to digitize and preserve eleven hours of audio. It should have been less, but there were some missteps.

One little known problem (among the general public) with analogue magnetic tape is that the signal is degraded slightly on every playback.

This OLIVE thing, by stacking a huge tower of emulators on top of each other, can run something ancient like Wordstar or CalcStar for CPM. But does that actually help you rescue your data - how do you then export files created in an ancient app out of the emulator and into a format readable by a modern app?

I don’t see how this system is actually useful for unlocking your ancient data and making it so you can use it again outside of a Jenga tower of emulators.

For a lot of people, the best solution, if we’re talking about files created by office productivity software before Microsoft conquered the market, is going to be a copy of Word 2000-2003, and the DOS file format converter add on package that MS used to offer for download on their website (still findable in various places on the net). That handles the DOS versions of (IIRC) Word, Wordperfect, Wordstar, and Ami Pro.

If you’re like my dad and bought something cheaper but far more obscure like PFS First Choice, the DOS importers for MS Word won’t work. There are commercial packages that will convert a huge list of ancient file formats to modern formats, like FileMerlin, which costs $100. A lot to pay for the nostalgia of being able to reread the essays you wrote for freshman English again, but not that much if getting at those ancient files will save you a few hours of work.

Hmm. Wordstar for DOS came with a conversion tool (whose name I forget) that could import and export a variety of then-popular file formats, including RTF. So if OLIVE includes Wordstar for DOS, you could import your First Choice documents into Wordstar format, then export them to DOC or RTF. I remember now that that’s how we eventually rescued my dad’s old data back when he switched to Word and had a ton of unreadable First Choice documents he still needed to access. Damn tedious but it worked.

Oh, and here’s a link for Filemerlin: http://file-convert.com/flmn.htm. The MS word converter package for DOS files was called wdsupcnv.exe.

I realized that DVDs/CDs are not suitable storage media

What did you choose for storage as an alternative?

Don’t overlook printing as a way to get stuff out of programs in a usable format.

A friend, working on a novel, stepped up from a buggy Apple II clone to a PC. The easiest way to get it across was to print from Apple to a vanilla printer. On the other side, I turned a PC printer port into a parallel input port simulating a printer. The captured text needed a few tweaks, but not much, and then imported to Word Perfect.

With emulators, the hardware hacks wouldn’t be needed.

Once you get antique audio or video onto a CD or DVD, you are 90% home, because it’s simplicity itself to rip either format and create an MP4 or MP3 that you can stick on any external drive, load onto your ipod, or whatever.

It’s a little bit alarmist of Cory to say that optical disks will rot. Commercially produced disks will last for quite a long time without any problems - they depend on actual microscopic pits in the surface of the disk. Burnable disks, however, depend on a colour shifting dye that isn’t stable. A very few brands of disks will last for several years, the cheaper disks will degrade in a couple years or even in months. But they’re perfectly fine as a transitional format between old video or audio tape and a modern hard drive.

I had hundreds of old Mac 800K floppies kicking around with no way to get the data off of them because the Macs of that era used a special CLV mechanism for writing the data (this allowed for an extra 80KB to be written on the normally 720KB floppies). No modern floppy drive does this making preservation of old Mac floppies very difficult.

Thank goodness for cool tech like the Kruyoflux - it’s a special floppy disc controller that can emulate all the hardware quirks of old systems allowing you to read all kinds of weirdly created floppies with off the shelf hardware. A gracious retro hardware enthusiast at my work let me borrow his and I was able to create images of all my floppies - even the ones that had errors (many had at least a few read errors) so I could at least attempt a partial recovery of data.

With these images, I can load them in classic Mac emulators and use the software or further process the data (like decompress stuff that was compressed with StuffIt or CompactPro) or even run this directly.

Don’t overlook printing as a way to get stuff out of programs in a usable format.

Plain text printing (to a file if the software supports it) would be great for text documents, not so great for spreadsheets or a database. Also a PITA to remove all the line breaks from the printer output so you can actually import the text into a new document without hassle.

Though the code involved has no commercial value

that isn’t right, the whole reason OLIVE is exciting is that these old applications and systems still have value for accessing old the old data they originally created.

that is just one of several remaining commercial values. the other being collectors markets and for interacting and integrating with old specialty applications for old custom hardware or old custom systems.

I realized that DVDs/CDs are not suitable storage media.

I have really old floppy disks that are still fine. most my regular DVR and CDR have degraded past usability, and the archival stuff isn’t even faring so well.

A gracious retro hardware enthusiast at my work let me borrow his and I was able to create images of all my floppies - even the ones that had errors (many had at least a few read errors) so I could at least attempt a partial recovery of data.

Intentional read errors were a copy protection method on some floppy games from that era, as was data written beyond the normal area.

The good thing about the Kryoflux is it’s extracting an image of the disk at the flux level so any intentional read errors would be duplicated as if it were the original media. Unfortunately in my case many of the read errors were on floppies I had created myself.

back in the day there was software that would make multiple read passes with the heads slightly offset to get a better guess at what the corrupted or erased bit originally contained. seems like something like the kyroflux would have that option as well? (probably a done deal and past at this point anyway, cool you were able to do that.)

But let me explain: So magnetic storage presents the problem of possible degradation on successive reads, but, is fairly stable if you don’t read it. So the originals are all still available as a form of backup.

Then we digitized them, so they existed on some flash drives (which are susceptible to random bit flips depending on the semiconductor technology in use and the nature of background radiation in your area.) They were also worked on and edited from their raw formats on various computer hard disks.

Finally, I purchased some M-Discs, which are (at least supposedly) longer lived, since they don’t rely on burning chemical changes into a dye layer, but instead rely on the laser physically punching holes into a substrate.

But if you’re following the thread of what I’m trying to say here, the technology I used to preserve the recordings was redundancy.

I know, and most real dangerous animal is man, and the murderer is the butler, and it was a dream all along. It’s not the most creative solution, but it does seem to be the most reliable.

EDIT: Even before I ever thought to archive anything ever, I knew better than to write on CDs or DVDs with a permanent marker. Don’t do it, people. The best practice is to write on the inner, clear area around the hole. I just write an abbreviations (e.g. “WIN10BCKUPRSTDSC”) and keep details on the sleeve or in the Jewel case.

As long as HP will release the IP, there are plenty of DEC hobbyists around who would have copies of the binaries. The original tapes will be useless of course. Been there, scraped the media off the heads.

So magnetic storage presents the problem of possible degradation on successive reads, but, is fairly stable if you don’t read it

No, old DEC tapes just fell apart on me, and they were less than a decade old.

I see this project as basically a toolkit which you can use to string together solutions. My former employer ran RSX11-M on PDP 11-83 and 11-84 hardware. When I left in 1998 they were moving to emulators.

No, old DEC tapes just fell apart on me, and they were less than a decade old.

I’m not sure if it compares. Analogue compact cassette has better polymer technology (I’m assuming here–I don’t know) and is designed to run at slower speed. Unless they’re still churning out brand new DEC tape on improved plastic. But considering the recordings themselves were over a decade old when we worked with them, I feel like they’re inherently more robust than what you’re describing. Storage conditions also matter, though. So who knows? 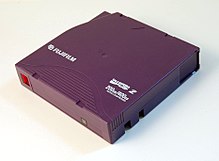 Linear Tape-Open (LTO) is a magnetic tape data storage technology originally developed in the late 1990s as an open standards alternative to the proprietary magnetic tape formats that were available at the time. Hewlett Packard Enterprise, IBM, and Quantum control the LTO Consortium, which directs development and manages licensing and certification of media and mechanism manufacturers. The standard form-factor of LTO technology goes by the name Ultrium, the original version of which was released...

Is that the same as DEC tape?

and when an EMP happens, I guess hard drives will be mostly toasty, no? Along with most of us, I suppose.

Preserving data these days is easy (and cheap), for sure. The next big hurdle is actually locating it again, when you want it a few years later.

At work, we’ve got terabytes upon terabytes of archival data dumped into amazon S3 (and there are a dozen competitors with similar offerings to choose from as well). It takes seconds to upload a gigabyte and pennies to store it – and it’s transparently redundantly stored across multiple physical devices for you, with error correction.

But in practice, actually organizing or searching through all that data later can easily take days.