paying taxes with nothing but school shootings to show for it.

There ought to be a Black Sabbath lyric/song in that thought.

Buckinghamshire is not Birmingham but it is closer than LA

Back then, the high rate of tax for a company was about 50%.
There was a 95% tax rate for individuals, but you only got to pay that when you were already earning a fucking obscene amount of money, which both the Stones and the Beatles were. They couldn’t spend 5% of their money if they tried.
But those were the days when a single income could put a roof over a family of four.
Then came Reagan and Thatcher.

If you want to learn more detail, I highly recommend:
https://bbs.boingboing.net/t/heather-cox-richardson

The tax changes are covered in great detail sometime in August. I have read them, but cannot pinpoint the exact post.

Crazy, but that’s how it goes…

but are taxes actually lower in the UK?

Taxes are one of the major reasons I moved back to Canada after 25 years in the States. However, it’s not “lower” that mattered to me. It’s what I get for those taxes. In Canada I get free healthcare, well functioning institutions, good roads, clean air and water, real action on climate change, police that aren’t a mercenary militia unaccountable to anyone, and minimal fear of being gunned down in the street for being trans. My taxes might be a little higher (too soon to say) but they are going to things I want, not waging wars on brown people to line pockets of defence contractors. I don’t want to own 1/10000th of a stealth bomber. I want to help a poor family pay for healthcare, which increases their freedom. That’s what my taxes do here.

Perhaps Ozzy is the same.

For a great breakdown of how taxes are about quality, not quantity, see this:

The important point he makes there is that Americans define freedom as “fewest laws affecting me” rather than “the ability to pursue my life with the fewest burdens”. If they defined “freedom” properly, they’d see that free healthcare is step one.

I’m sure rich people everywhere are able to take advantage of tax avoidance schemes, but are taxes actually lower in the UK? Maybe they are, but that would surprise me.

I thought wealthy Brits came to the states to escape higher taxes while the ones who stayed in the UK (and were celebrities) received knighthoods.

My taxes might be a little higher (too soon to say) but they are going to things I want, not waging wars on brown people to line pockets of defence contractors.

In order to make an apples-to-apples comparison, we would have to include healthcare expeses as a phantom tax that USians pay the Canadians don’t. Once that’s in play, it is really obvious that you pay less tax in Canada than we do here in the US.

supre important to remember that this is marginal tax rate.
your first 50k of income is taxed at 10%
the income you make above 50k (an only that income above it) is at like 20%
and so their income above like 5 million a year is 99%

There is no situation where a person makes 10 million and only gets to keep a measly hundred thousand. That’s not how it works.

Oh I get all of that and am in full agreement. But Ozzy apparently told the Daily Mirror he was moving back to the UK because taxes in the US were too high, and I doubt Ozzy was talking about what society gets in return for those taxes, so I just find that reason dubious. It seems too much like the warning I always hear from Republicans: if you tax the rich, they’re just going to move overseas. This message seems designed for those people to say, “I told you so!” And I’m not buying it.

Yah, that’s precisely the point that David Cross makes above. If you consider an American is going to be 100k out of pocket for cancer or a car accident, things look very different.

Ah, if worded like that, it is weird. Sounds kinda dog-whistley to me. Not sure what Ozzy’s politics are, but it is a strange thing to say for this move.

Oz will have “sold” all his rights to a managmenat company, he will then own that company, he will then pay him self £0 but take profits out of said company as share holder, in the uk share income unlike job income is only taxed at 20%, so he will prob pay a lot less tax by moving home and even then he will be able to use any paper losses to even get out of that some years.

I really wonder, that despite what Sharon says, his health is going downhill fast. Maybe he just wants to go home.

Ted Nugent had something to say and it was typical wackadoodle Ted stuff including a rant about student loans. 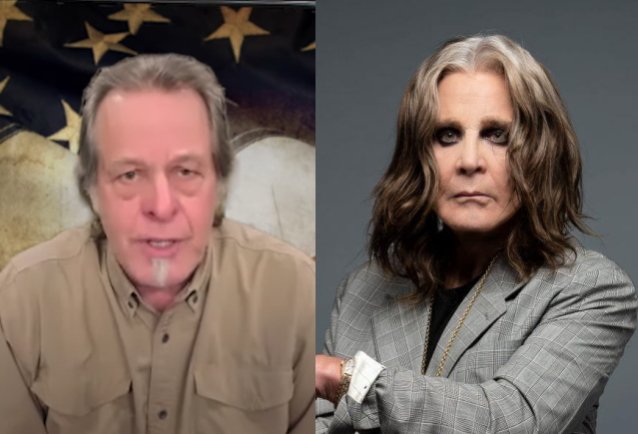 Ted Nugent has weighed in on Ozzy Osbourne's recent decision to return to the United Kingdom after spending more than 20 years living in Los Angeles. Last week, Ozzy told the Observer that gun violence in the U.S. is part of what convinced him to...

in the uk share income unlike job income is only taxed at 20%, so he will prob pay a lot less tax by moving home and even then he will be able to use any paper losses to even get out of that some years.

The US has all those tax loopholes and many many more though. Nobody in that country who earns more than a few hundred K per year pays any taxes at all due to all the loopholes. There’s a cross-over moment where expensive accountants are cheaper than the taxes they are supposed to pay, so they all switch.