Many unproven conspiracy theories exist with varying degrees of popularity, frequently related to clandestine government plans and elaborate murder plots. Conspiracy theories usually deny consensus or cannot be proven using the historical or scientific method, and are not to be confused with research concerning verified conspiracies such as Germany's pretense for invading Poland in World War II. Conspiracy theory is often considered the opposite of institutional analysis. Numerous conspiracy th...

This makes sense, but it’s good to see some confirmation of it. I like that they put conspiracy belief and superstition basically in one bucket.

For those who like to be snarky about “religion being the last refuge of the desperate” – yes, yes it is. Now think about how little control one must have in one’s life to be that desperate.

They moved that billboard to the women’s rest room at the North Carolina State House.

People with a false sense of control fail to understand conspiracies.

We all know what the real conspiracy is right?

What does feeling like you’re being judged by those around you have to do with conspiracy theories or superstition? Everyone judges everyone. Or is it just that it bothers some more?

What does feeling like you’re being judged by those around you have to do with conspiracy theories or superstition?

Conspiracy theories give losers a sense of superiority they can use to judge back. No matter how successful someone else is, they’re sheep / sheeple / not awake / unable to think for themselves. Proven by their inability to accept that there will be a North American Union by 2005 (er, 2006, er, 2008, er, 2010…) or that the nearby “furniture warehouse” is actually a FEMA death camp.

It was also seen outside polling stations.

This is true and I wish it would spawn some compassion. When a person has lost control of his life, whether through bad decisions or outside influence, that person is going to look for a reason the lack of control is not his fault. Conspiracy theories are an easy way to defer personal responsibility, and in some cases bolster a sense of exceptionalism.

For instance, a contractor who can’t find work in Salt Lake City might blame LDS Elders for freezing him out. In his mind, a broader conspiracy against non-LDS members is preventing his success. In fact, he might be unsuccessful because he does a poor job marketing his business. Believing there is a conspiracy absolves him of responsibility for his failings.

People do judge each other sometimes. But more often people think about themselves, their own personal narrative, goals, problems, etc.
There are some people who go through life with the anxious idea that they are constantly the focus of everyone’s attention, and they are performing poorly, and everyone else knows it and dislikes them for it. Unless you are someone like Miley Cyrus, that kind of idea is obviously wrong, and there is no reason to think it is true. Nonetheless, people are able find evidence of their unending persecution, just like finding a prophecy of the WTC attacks on dollar bills, or finding Jesus on a piece of toast.

i think one of my fears is that as i get older i’ll fall into some conspiracy-thinking behavior like this without even knowing it. same with technology: i’ve been keeping up with it ok so far, but i am sure that somewhere along the line some advance is going to be made that will totally blindside me and i won’t be able to wrap my head around it. then all the young’uns around me will just take to it like ducks to water, and i’ll look like a doddering, slow fool. (hmm, maybe THIS is my conspiracy theory?)

Takeaway; The LDS does not promote (hire) from within(?)

To be fair, some “conspiracies” are no more than a well placed group acting in their rational self interest. The economic crash of '08 might not have been the result of villainous mustache twirls in a smokey room, cynically plotting how to destroy their world, but it certainly did result in a lot of people having much less control over their own lives.

The most resilient and flexible of those economic victims picked themselves up and dusted themselves off, and are doing okay now. But to hold that up as the new normal is kind of a dick move.

When the Catholic Church conspires to protect its rapists from the law, that sounds just as crazy as “the apollo landings were fake”, to anyone who has no reason to doubt the church.

Control is over rated.

Everything I know about life, I learnt from Tom Cruise movies.

I’ve always held that both conspiracy theories and mysteries are comforting for some.
The first because they supply a reason for things when there is none.
The second because they indicate that there are people out there that give a damn.

Also I hold that most if not quite all conspiracies can better be described as happy accidents. Someone does something for their own reasons or no reason at all and someone else notices that it works for them.

Also conspiracy relies on no one involved ever wanting to have sex with a stranger ever again.

Control is over rated.

Without Control, Kaos would take over.

That’s exactly what they want you to think. Wake up sheeple!

The very idea of control is largely an illusion; one that many people need just to function in everyday life.

IMO, the only thing a person has any real control over is his or her reaction behavior in response to any circumstance or situation. 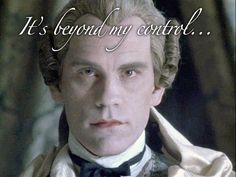