No that can’t be right. Put more marbles in all four buckets… the angles won’t change a bit.

No, actually, although it does contribute to the illusion I think the buckets resting on the table.

Bonus: if the cables were longer, the table just comes to rest at a lower altitude. One consideration, though, is that you want the ropes all the same length, otherwise the tabletop won’t be horizontal.

Or more likely, the table is stopping the buckets from falling to the floor.

The table is pushing itself down. The buckets are helping, but the table would still fall if the buckets weren’t there.

Unless it was very hot in there the water would evaporate very slowly causing the table top to descend almost agonizingly slowly. This could win a Rube Goldberg award for the most complicated room humidity sensor. As the table drops slowly it would stop a clock that then would tell you the elapsed time of evaporation , which knowing the weight of water needed to evaporate to allow the table to begin moving would tell you the average room RH. Of course surface area and room temp need to be known. Sounds like a science fair project!.But more interesting would be to place a weight on one corner and watch what happens. Table tilting , buckets dropping, Oh the fun!

It seems like once enough water evaporated for the table to start dropping, its movement would accelerate, because there is now more rope (hence more weight) on the table side of the pulleys and less rope on the bucket side.

If the strings were black, the physics police would never allow for this.

the buckets are glued to the table

Exactly! That’s the best reason to do it. Precarious balance is more fun than stability any day. Using inverted cones would make it even better.

Why? The weight of the buckets holds them against the table/the table against them.

Basically, you have three forces acting on the buckets:

And three forces acting on the table:

A certain condition has to be met for the system to be stable. I solved it for 2 buckets so I could easily draw the pic, but it’s exactly the same for 4. 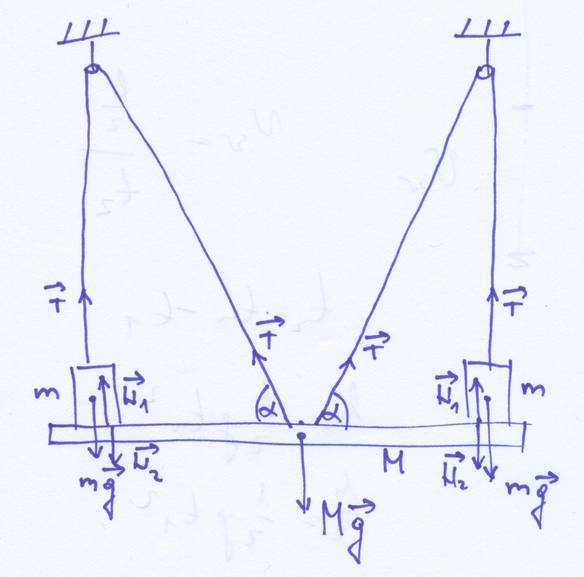 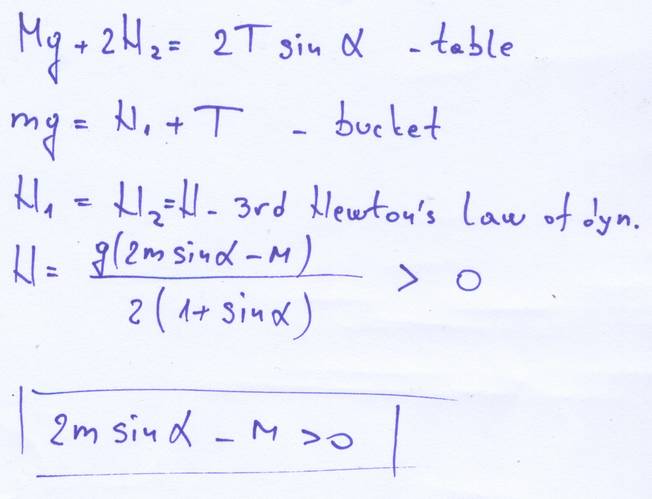 So, as water evaporates, m decreases and when N reaches 0 table will (slowly) fall.

Correct me if I’m wrong, but couldn’t you use just one bucket if you had four more pulleys? (Did I really need to write that first clause? Probably not, that’s practically guaranteed.

This is the sort of physics problem that is understandable by anyone who took a class in statics at university.

It’s quite simple physics but there IS something pleasing about it.

It reminds me of the interesting balanced setup from this Sixty Symbols video, which might help you understand balanced systems better: 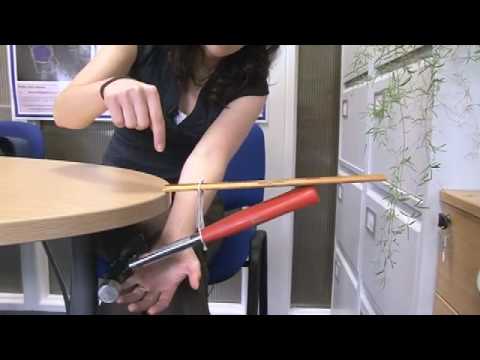 Correct me if I’m wrong, but couldn’t you use just one bucket if you had four more pulleys? (Did I really need to write that first clause? Probably not, that’s practically guaranteed. )

You could do it with one pulley. In fact, maybe if you imagine a single pulley with two buckets, it’s easier to see what’s happening. Fill one bucket and it will be pulled downwards. Put the water-filled bucket inside the other and it won’t move–the heavier bucket pulls the lighter bucket upwards, and the lighter bucket stops the heavier bucket from falling. The setup with the tables and the four pulleys is basically the same thing.

There is no table.

No, really… tables have legs! 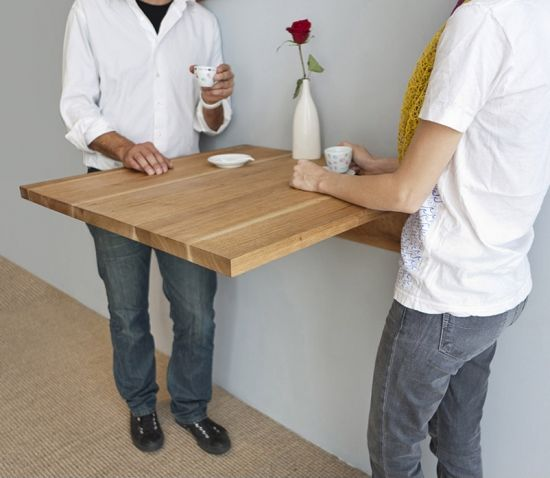 Hmm… or is that just a big shelf?

No offense, but I understand the physics involved. When I said it would be harder to balance, I misspoke. (mistyped?) What I really meant was it might be harder to get the table level.

But I should have phrased my original question better. I was wondering if the mechanical advantage given by the four pulleys mounted to the table would allow one bucket of the same weight as in the original setup to offset the weight of the table.