Yeah, I think that article is rather shrill.

If that’s really the problem, the boy’s aunt (who bought the toy) almost certainly had the option of returning the product for a full refund.

Now, if you don’t think that’s the solution, you are possibly thinking of a different problem other than the one you stated.

Well yeah, there’s also the problem of minders of other children unwittingly letting them play with it.

Including cleaners in a series of Summer Fun could be read as highly educational, as the reality is that most summer fun is made possible by people working behind the scene. Maybe the cleaner should have the symbolic slave collar, as the vast majority of workers in the hospitality industry are illegal immigrants working in quasi enslaved circumstances. A great starter for an insightful discussion with the children, just before going on holiday?

In any case, Playmobil is Lego’s idiot cousin.

I don’t think that’s a fair characterization. The focus is just very different. Of course there is next to nothing to construct, but at least for some of us there is more to the world than engineering. From the start Playmobil has always been built around the figures (which it had earlier than Lego.) It’s all about the interactions of people in certain settings. The inanimate objects are just sets and props.

Let’s take the aforementioned maid set. If you want to play “Hotel” or anything similar and you are more interested in the human interactions than the bricks and mortar, then a character like that adds richness and complexity to the system. The low level of STEM and violence may be uncomfortably close to a doll house though.

In any case, Playmobil is Lego’s idiot cousin. Apart from Lego seeming to get out of the floating ship game, I think they win on all fronts.

As the sort of unofficial “no, playmobil is not the devil” advocate around here, albeit a tired-of-the-exact-same-discussion-every-time one, let me just say it’s nice you have an opinion, but a lot of people around the world would disagree. Playmobil is a de facto design classic and the fact that it’s essentially unchanged since it was invented in the 70s in a market that’s almost brutally centered on fads, pop culture tie-ins and the latest holiday season must-haves shows how much new generations of boys and girls around the world somehow keep enjoying those cheery, noseless, beer-can-shaped-handed little bastards.

It’s perfectly fine for you (and any number of Outraged American Moms of the Week) not to like it. There are other experiences, viewpoints and cultures out there.

As for violent themes and gendered sets, I guess I can copy and paste my response from some three identical threads ago, because the response hasn’t changed.

As a Brazilian who happily grew up with these toys (they’re a big symbol of 80s nostalgia around here still today), I’ll have to agree with some if the above sentiments: these are happy and inclusive toys, cleverly made with a child’s play sensibilty in mind (hand-sized dolls, interchangeable accessories) and the fact they depict ‘bad’ characters like robbers, cowboys, pirates and gladiators mean that’s the kind of fantastical play scenarios children enjoy playing with.

Sure, they could cancel each and every potentially offensive set until only the most benign ‘bunny veterinarian’, ‘office worker’ and ‘nun’ dolls and sets remain (and yes, these all exist and can be lots of fun). But should they, really? Not to me.

This line of thinking that the mere existance of potentially unwholesome things for children is going to corrupt and destroy mankind’s morality has been proven wrong again and again. I for one applaud the fact playmobil is equally inclusive of all sorts of scenarios, from homeowner to radiation cleanup crew. And the best example of dolls designed for both boys and girls, without pink-and-blue segregation like lego has been up to.

Unlike lego, playmobil shows a play-world where male pastry chefs and female firefighters are a perfectly natural thing. Can any other toy line make that claim?

The pastry and firefighter thing above was a reference to this specific bit of Lego gender segregation:

And since this stuff is just so much fun to google and I enjoy procrastinating on more important things, here’s some illustrations. 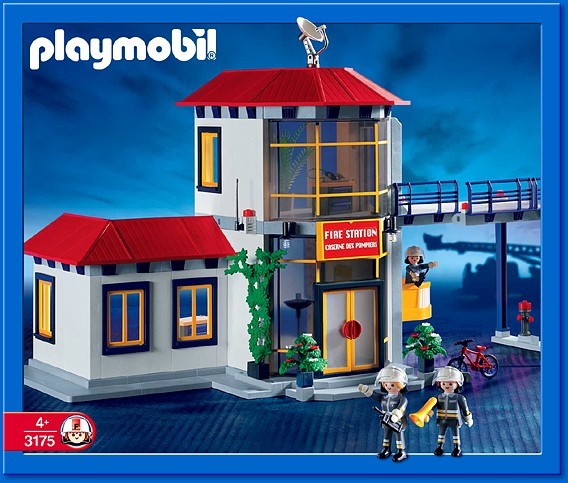 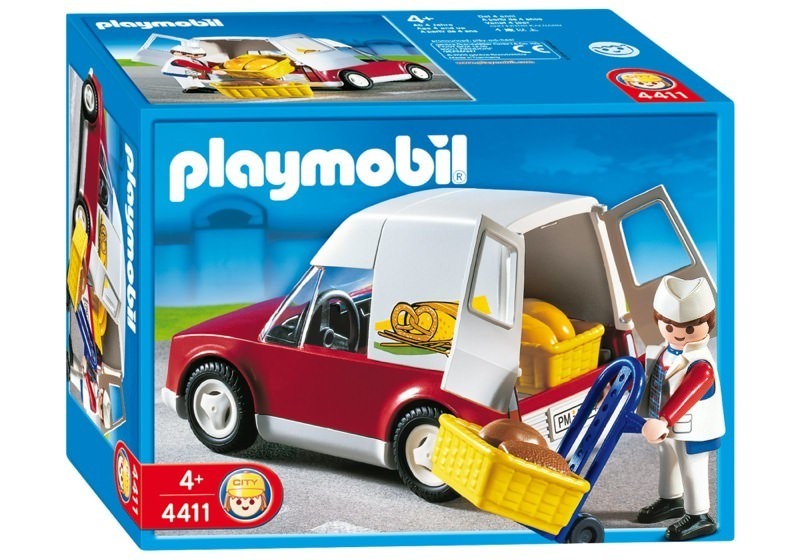 Assorted doll houses that could conceivably be enjoyed by both girls and boys, if they’re into doll houses, without BUT THIS IS FOR BOYS/GIRLS I HATE IT MOM overly-gendered-marketing embarrassment: 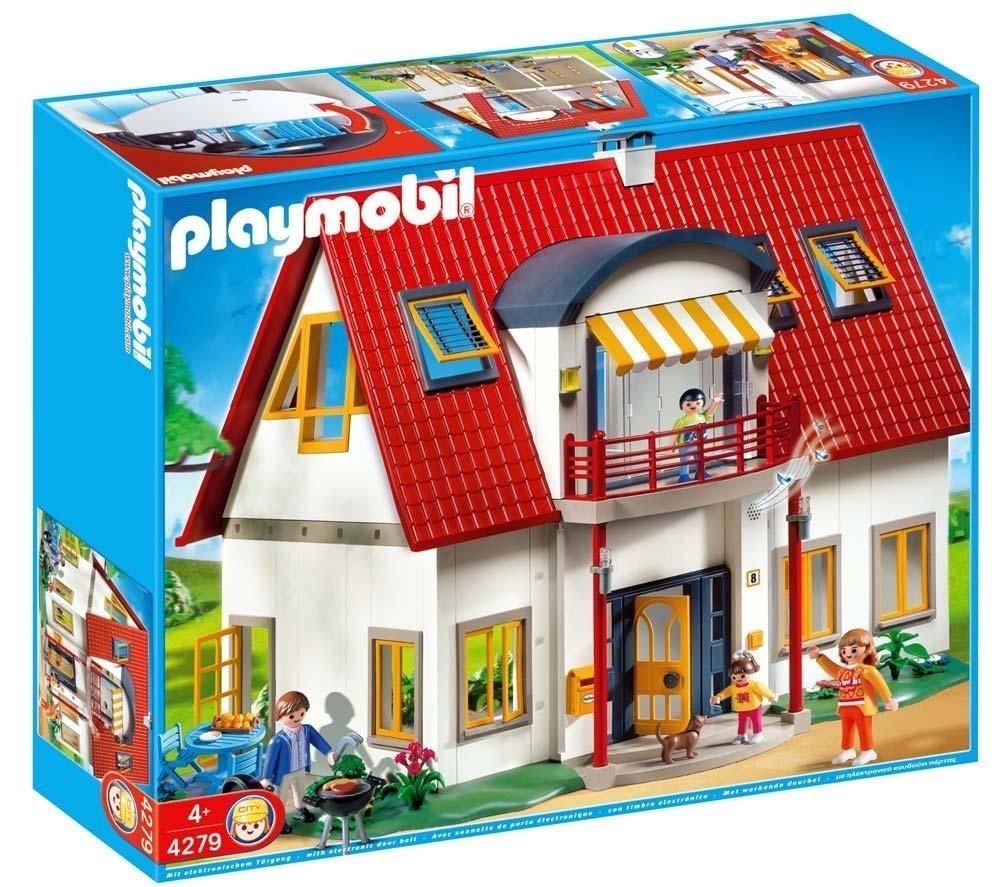 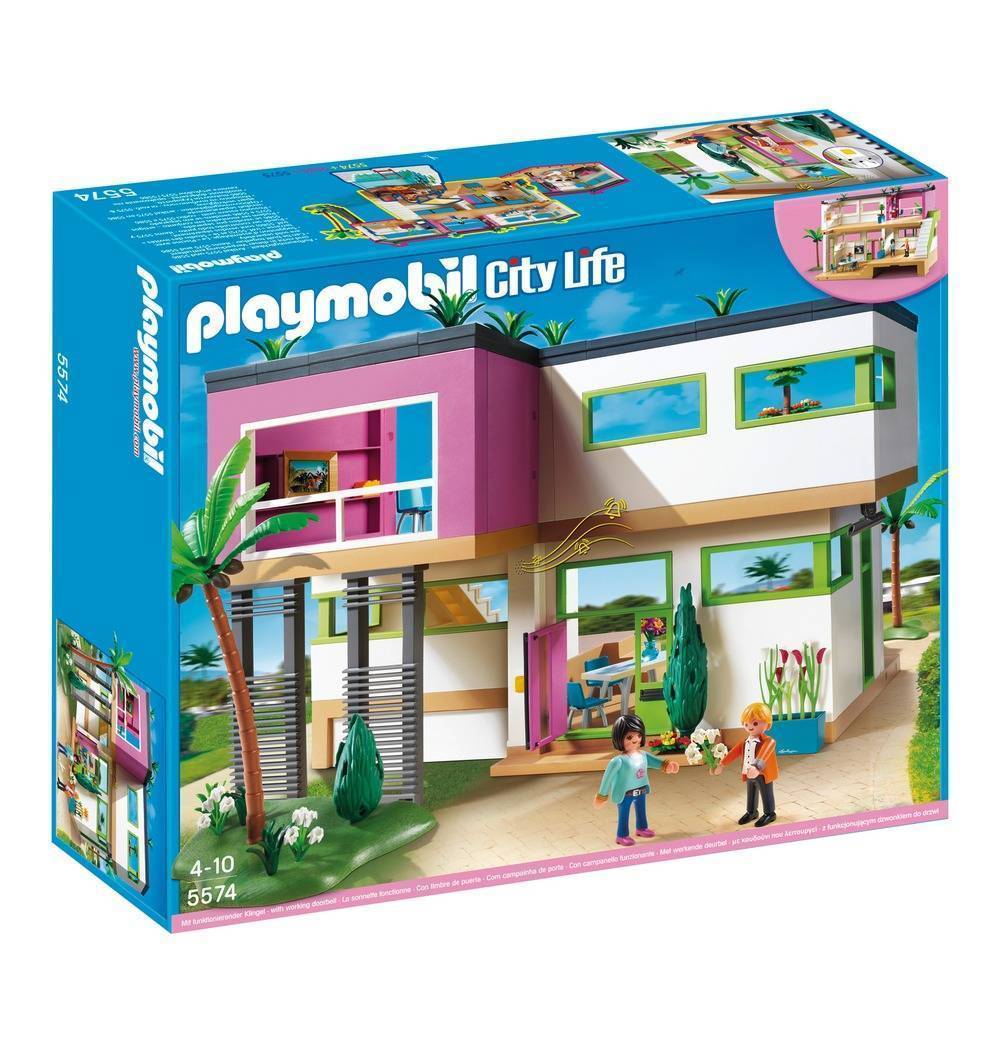 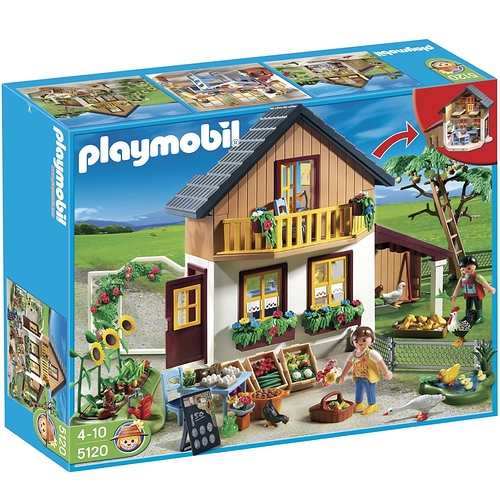 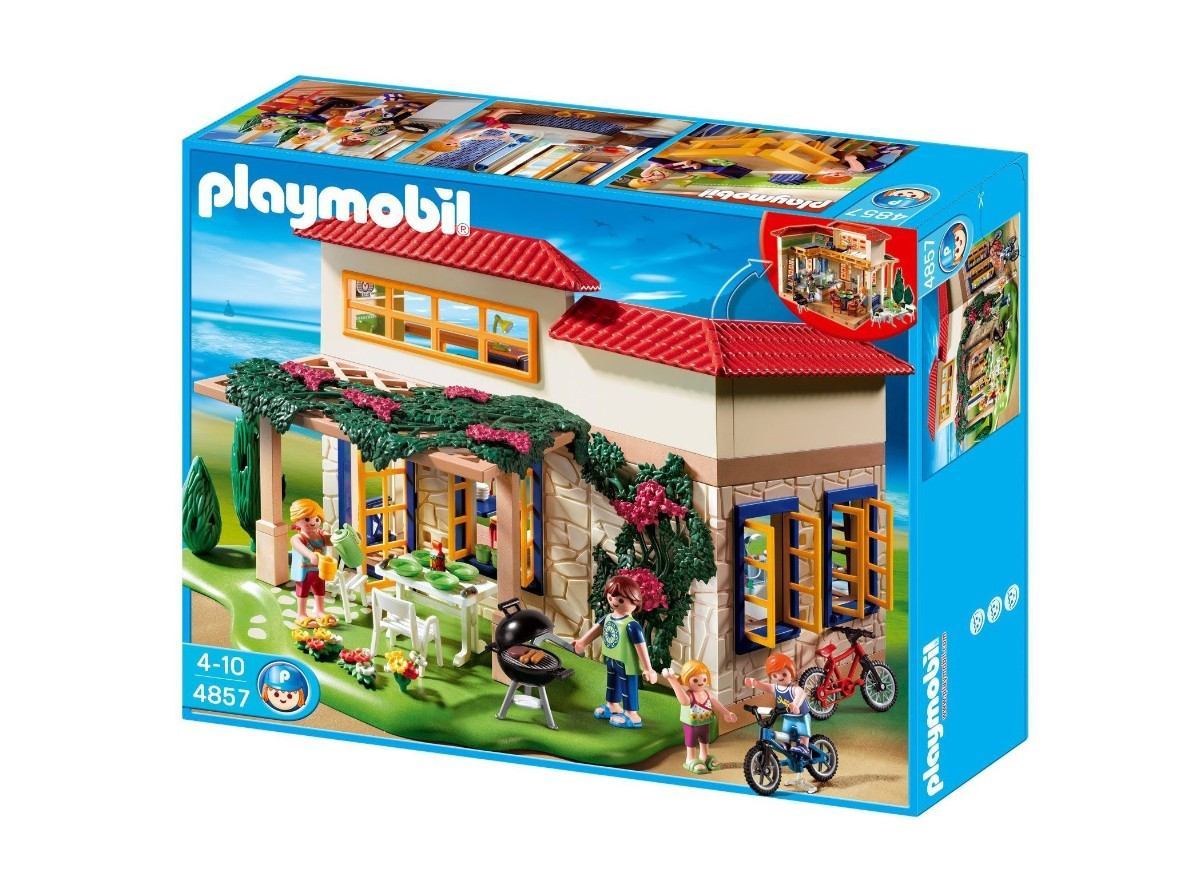 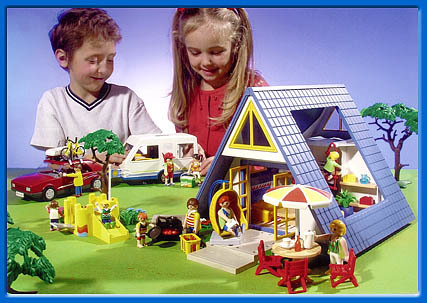 Who could hate Playmobil, really? What is it with you people? This stuff is pure, distilled childhood fun.

Who could hate Playmobil, really? What is it with you people?

In my circle of friends I see two camps: One grew up with Lego, the other with Playmobil. We ridicule each other with passion. 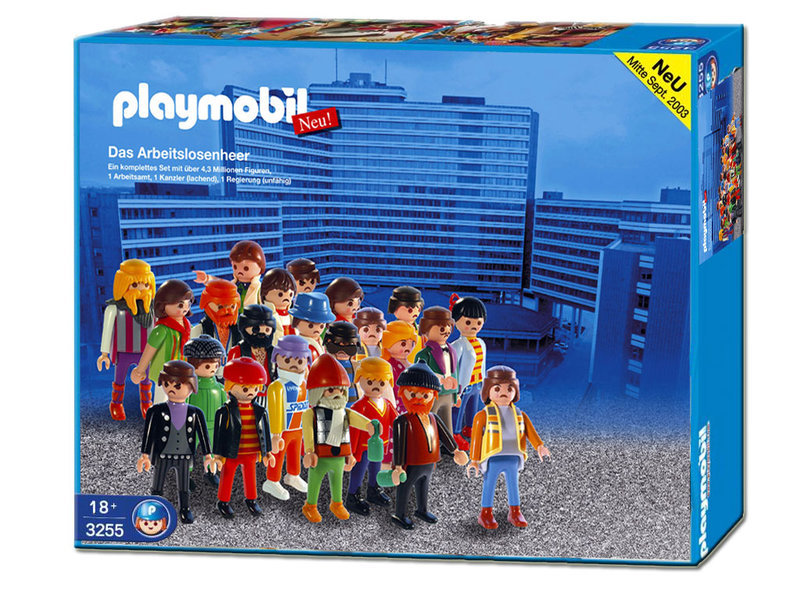 The Army of Unemployed

One grew up with Lego, the other with Playmobil. We ridicule each other with passion.

there’s also the problem of minders of other children

An excellent point, Millie. I have just this moment reported the issue to

I'm here to chew bubble gum and dispense problematics. And I am all out of bubble gum. If you see...

and I would be satisfied with no less than a five-problematic rating. 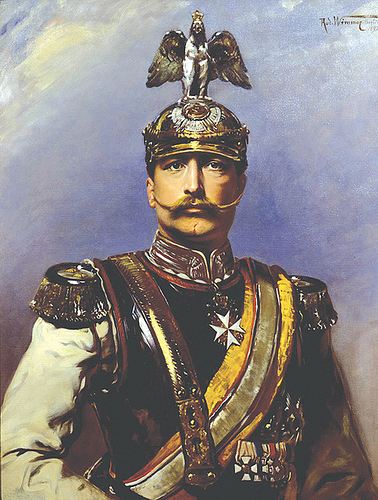 Though nearly as fancy as the one with the flower!

He is wearing the red collar and cuffs of a Prussian municipal police sergeant with the double-breasted jacket of the Berlin capital police. Madness!

FWIW, this particular American mom is also a fan of Playmobil. I could open a store with what remains from my kids’ childhood…which is virtually all of it, since the stuff is basically indestructible. At least one of them better provide me with grandchildren so I can hand this stuff down!

I find it amusing that pirates are a subject of fun and entertainment today. In real life, back in their day, pirates were loathed and feared. So romanticizing them and turning them into entertainment seems to me like having a Disneyland ride called “Osama Bin Laden and the Terrorists of the Middle East”.

Can’t we blame Treasure Island for that?

Where I come from we don’t call him Santa Claus, so you speak of projecting but you’ve projected a completely different cultural identity onto me. In any case, I can assure you that Dutch colonialism is not a figment of my imagination (you have colonies now, for heaven’s sake - where do you think they came from?)

I’m not Dutch, I’m Belgian. So no Santa Clause, probably “Father Winter” then. The cultural arrogance reeks of the anglo world.

Reality continues to be real, regardless of whether you choose to accept it - and plenty of people from other ethnic backgrounds in the Netherlands have pointed out how this particular case is offensive to them.

You want to talk reality of how insane this thing has become ? Black people in Suriname are painting their faces blue to avoid being called racist by white bobo’s. As related in this article (in dutch) which tells how they replaced Piet by “sugarfairies” (sexily clad young ladies with painted faces) to avoid being called racist due to the hubbub in a country half a world away. Also note how they are still celebrating Sinterklaas despite their government trying to ban it, twice. Yes, despite it being “horribly racist”, despite it being a “cultural remnant of the imperialist colonisers” these people still celebrate it. What an awful thing it must be.

You have no clue what you are talking about, which is OK. What is not OK is making serious accusations like racism based solely on your own preconceptions and biases.

Being indestructible is always welcome when it comes to toys.

Good thing that, Luke Skywalker hair aside, these dolls are probably the least dated example of 70s design I can think of. I can think of a couple of things from that era we’d be too embarrassed to share with new generations even if they physically lasted long enough.

Hrmm. I had totally missed that this character was supposedly a slave when I put this together with my 4 year old. He did do a lot of the assembling of characters, so maybe that was a part that he did. I’ll have to have a look tonight and see.

Ah. Thank you. Now I understand the value of having more of a ‘real world’ aspect to a ‘summer fun’ series, something I missed in KarlS’ somewhat scolding reply.

Black people are perfectly capable of internalising and perpetuating black stereotypes - it doesn’t make the stereotype any less racist nor does it mitigate the fact that these stereotypes were used to justify subjugation - which as a Belgian you’ll know all about, I’m sure.

I don’t know what a ‘white bobo’ actually is, but the only people I’ve ever heard to complain about the Zwarte Pieter tradition were black. I know that other colours have been tried, but since this has resulted in arrests and death-threats I think I’m on the right track, in that complaining about the figure has exposed the sentiments of white superiority for what they are - and the lengths that people will go to to defend that privilege.