You should see what Lucy now holds instead of a football. The only reason they’re both still alive is because she always pulls it away just before he can kick it.

Brown is tormented by the fact that he might have been able to prevent this holocaust, but Lucy yanked the Nuclear Football out of his reach at the last second. Now he roams the dangerous landscape fighting for survival like a crashed pilot behind enemy lines, the orange-tinted sun glowering overhead like a great pumpkin. No roadside psychiatric help to be found here; his weapon is his only security blanket.

His heart knows nothing but grief, and that grief is good.

Apparently that animated special where the gang visits Flanders Fields wasn’t enough for this artist.

“Here’s the regular dog, just sitting in the yard, and everyone is still alive.”
“…{sigh}.”

Well it DOES look like he’s holding an SMLE,so the Flanders Fields thing would seem to be related…

Jason Yungbluth did an entire comic about this. 416 pages, features Little Orphan Annie and the Wizard of Id and basically everyone… It’s incredible. http://www.whatisdeepfried.com/2013/01/20/weapon-brown/

You beat me to it by seven minutes. 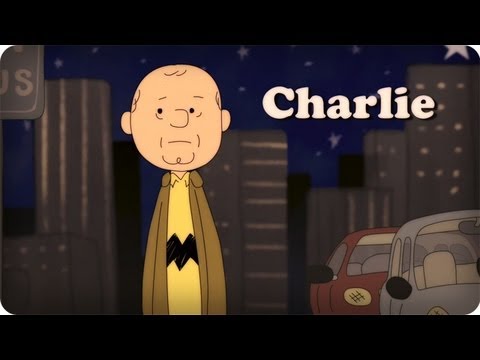 Is this Louie/Charlie Brown parody hilariously depressing or just depressing? Or...

Maybe we shouldn't wonder how the Peanuts gang spend their holidays as adults.

Nah, it went like this:
“Well I’d say she certainly had marvelous judgement, Charlie, if not particularly good taste.”

"Time counts and keeps countin’, and we knows now finding the trick of what’s been and lost ain’t no easy ride. But that’s our trek, we gotta’ travel it. And there ain’t nobody knows where it’s gonna’ lead. Still in all, every night we does the tell, so that we 'member who we was and where we came from… but most of all we 'members the man that finded us, him that came the salvage. And we lights the city, not just for him, but for all of them that are still out there. ‘Cause we knows there come a night, when they sees the distant light, and they’ll be comin’ home. "

It bothers me more than it should that Snoopy doesn’t look like a beagle.

It’s the 38th Snoopy. He stopped caring about numbers round about Snoopy the 15th and breeds at Snoopy the 23rd. Now any black/white hound is good enough.

He’s missing a baseball bat in his pack. He probably swing and miss anything he’d try to hit with it but the bat makes more sense than a football in the pack.