Apartheid is a pretty loaded term, setting oneself and one’s community apart specifically on racial lines. This is still more of mankind’s long running abuse of others because of power imbalance.

Well, if the rich put themselves at sufficient physical distance from the poor then I guess missiles are an option.

I guess missiles are an option

But only the wealthy can afford the missiles, often bought from the pockets of the poor as in Nigeria by privately exploiting the public natural resources.

I sense a Maker thread will be soon forthcoming!

There’s only so much distance the rich can put between themselves and the poor if they still want someone to cook their meals, clean their pools and raise their children.

Sometimes I feel like we played the game wrong and got the bad ending.

Exactly someone is going to have to clean the toilets.

I’m not sure what the current African customs are, but in the 19th century, upper class British and Americans had live in servants so they didn’t need to have actual slum dwellers near them.

There’s only so much distance the rich can put between themselves and the poor if they still want someone to cook their meals, clean their pools and raise their children.

No; they will offer a hard but endurable life to their servant/slaves, enough preferable to the anarchy outside to keep ready supplies coming.
It’s how the US already works its farms with people from Mexico, no change needed.

I’m not sure what the current African customs are, but in the 19th century, upper class British and Americans had live in servants so they didn’t need to have actual slum dwellers near them.

The message that conspicuous consumption is offensive and horded wealth is obscene needs to enter the public discourse. We need to shun and mock people like this instead of praising them.

only the wealthy can afford the missiles

Palestinians have been making their own for generations.

All hail the coming cyberpunk dystopia! Thankfully I feel a lifetime of William Gibson and other genre novels has prepared me fairly well for this moment.

Can we not just skip straight to the Culture, dammit?

With late-19th-Century Britain, it wasn’t just the upper classes that had live-in servants, it was middle classes as well, and even the less poor had servants (not sure if they were live-in as well.) With large families and no washing machines, a household with children took a lot of unskilled labor, and was a job that was socially available to young poor women.

If they’re far enough out to sea, does that mean they’d be fair game for pirates?

“Ties to…” Maybe the two most insidious words in all of yellow journalism. Did you know Obama has ties to Kevin Bacon? In fact, we all do.

If you read past the emotionally-loaded class-war rhetoric in the report … isn’t the general idea actually pretty cool?
Look at all the retro-futuristic “Cities of tomorrow” dreams, or Buckminster Fullers various visions. It doesn’t take much thinking to realize that the first wave of these must be funded by the ultra-rich, and that they would be among the first inhabitants.
This scale of endeavour is not going to be built by a non-profit kickstarter.

Image - “the Future” by Usbourne books. 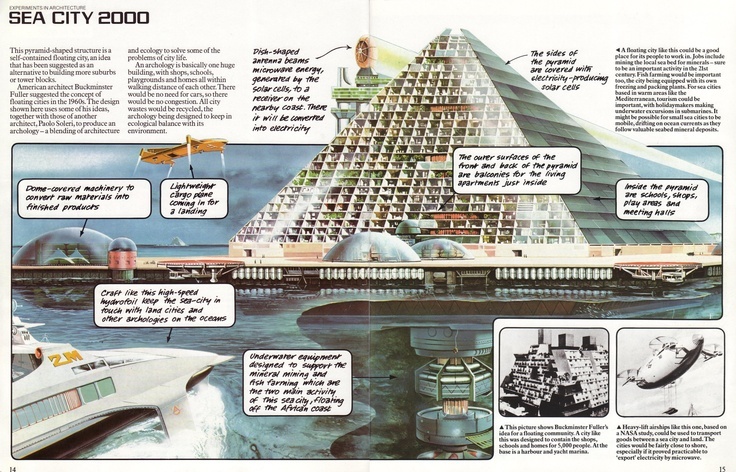 What happens next - whether it become extreme social segregation ranted about in this report or just the eventual commodification of climate-compatible housing for the masses - remains in the realms of speculative fiction.

uh, wouldn’t the whole general idea fall “in the realms of speculative fiction” since, you know, it hasn’t actually been done yet?

by contrast we have actually had quite a bit of feudalism, wide-spread poverty, and “class war”.

If you believe this sales pitch, I have a bridge to sell you. Besides which, there is nothing new about rich people living in exclusive, expensive places.