Purposely stalling 20% of cars in Manhattan could trigger total gridlock

“This isn’t just bad traffic where you are an hour late. It becomes impossible to get from point A to point B,”

…in a car. Why the fuck you’re driving a car in MANHATTAN is on you.

I think the issue might be less one of folks who could take a train as an alternative and more one of emergency services, buses, delivery vehicles, etc. being immobile, that would make it something more than mere inconvenience.

This sounds like the plot of a Batman movie.

I’m ok with that.

Those are literally the only vehicles that should legally be allowed on the streets*. Unless this article concludes with a recommendation of that kind, I’m not sure what they’re on about.

*With the exception of delivery trucks…Well, I won’t get into my personal armchair civil engineer ravings about how all cars should be banned from Manhattan, subways used for shipping, and humans riding buses and light rail above ground…

Well, that’s a different discussion, though, isn’t it? The recognition of infrastructure weaknesses has to deal with the world as it is first and foremost, doesn’t it? We can agree or disagree about whether personal vehicles or taxis or delivery vehicles should be allowed in Manhattan and a couple billion dollars spent instead on developing a different infrastructure to move the people & goods around, but that doesn’t change the fact that the infrastructure as it is is particularly vulnerable to a specific kind of attack that would be devastating.

That was my initial impression as well. It seemed pretty self-evident that disabling 20%, i.e. many thousands, of vehicles on a densely packed island would create gridlock, but I’m not a traffic engineer so what do I know?

Why the fuck you’re driving a car in MANHATTAN 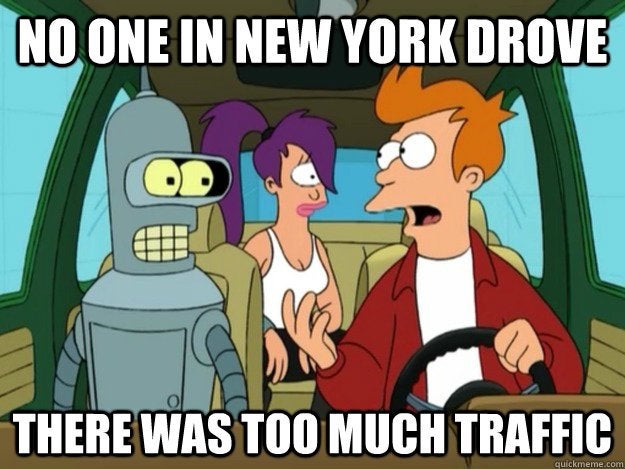 Disabling 20% of all vehicles on the road in any city will cause gridlock.

Yeah, that was my first thought as well. You could also completely freeze up traffic on most highways and interstates if you disabled 1 vehicle in 5 suddenly. At least until people pushed the disabled vehicles out of the travel lanes.

I’m curious how long they think this total gridlock would last. Eight hours? A day? Are they even considering the possibility that people will clear the stalled cars from the roadway?

I could do it with a lot less than that, if I can place the stalled vehicles in certain strategic locations…

This is exactly what I was thinking. What if instead of 20% the headline read:

Well it depends what sort of evil villain you are.

Are you the sort of electronic hacking, mass disruption, just because you can villain, or the strategic, subtle, a few cars here and there at carefully chosen locations, in love with your own cleverness, villain?

Either way, (@TripleE) Batman ain’t gonna put up with it.

Thinking the same thing, theres plenty of simple ways to do this the social hacking way rather having to hack car systems. Honestly, just look to the NY subway emergency brake puller: 1 person can create that havok, imagine what 10-15 people with a little knowledge of traffic pain points in manhattan working together could create…

Or messed with the traffic lights as proven in The Italian Job.

(I have no idea what is going on with the aspect ratio in this clip.)

…in a car. Why the fuck you’re driving a car in MANHATTAN is on you

I tried that once, when I was driving to Brooklyn from upstate. Never again.

constantly you see people in SUVs just laying on the horn in Chinatown while everyone goes about their business around and in front of them/. It’s like “Where the fuck are you going? The Staten Island Ferry? I have some bad news…”

…or the strategic, subtle, a few cars here and there at carefully chosen locations, in love with your own cleverness, villain?

That one. If I was a villain, I’d definitely be in love with my own cleverness. But really, all I got is self-doubt.

Indeed, I’ve frequently thought about what kind of gridlock I could create by deliberately staging a few accidents at a dozen major intersections. Could you completely block police in a city, using only 15-20 accomplices? Of course, it would quickly become obvious that they were in on it, so you’d need stolen cars and the people to quickly exit the scene.

Was this already a movie?

Would anybody notice the difference?