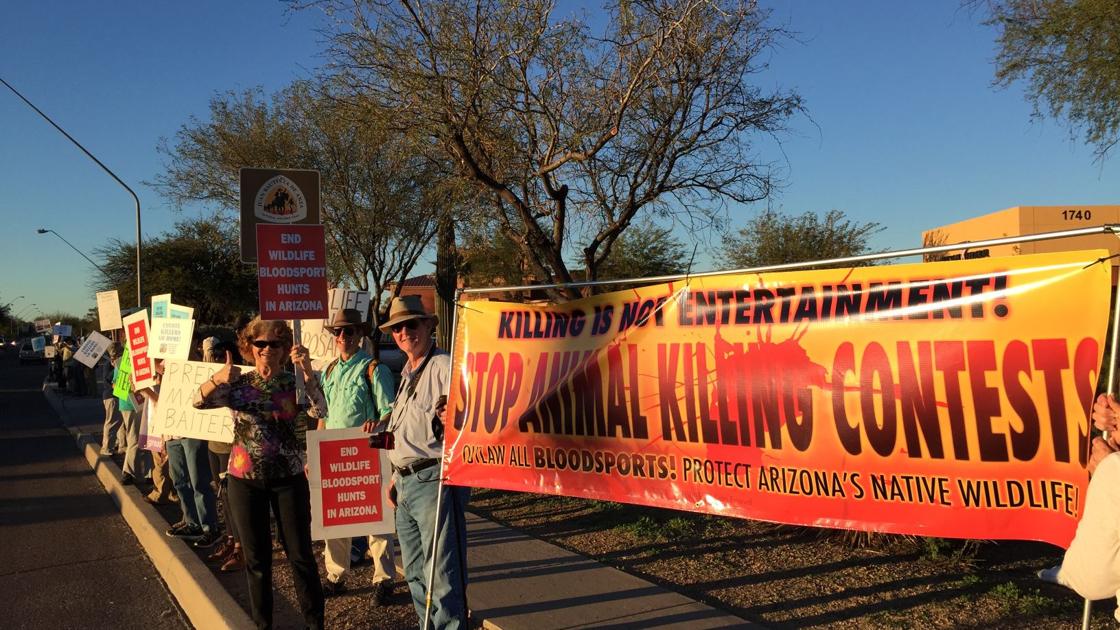 Convention in Tucson could include predator hunting by members.

That was a varminter, and an incompetent one at that. Varmint hunting is the practice of hunting vermin, generally small mammals targeted as a means of pest control, rather than for food. Varminter may refer to a varmint hunter, or describe hunting equipment either specifically designed for, or suitable for varmint hunting, such as a varmint rifle. Varmint hunters may hunt to exterminate a nuisance animal from their own property, to collect a bounty offered by another landowner or the government, or for amusement. The term varmint is a US colloqui...

First rule of shooting (as distinct from gun safety): ALWAYS be sure of your target. If you’re not sure, DON’T pull the trigger.

Lots of stupid people in the world. Some of them have guns and want an excuse --any excuse – to use them.

People who live near them. They harass and eat live stock and in some cases pets.

And to be fair, if that is like the only wolf in the area, you wouldn’t expect to see one out there hunting coyotes. You would think, “Huh, that’s a big 'yote.” I mean, they had to do a genetic test to confirm it was a wolf.

Also wolves aren’t rare by any means, just rare for that area.

ETA - the link to the article is broken.

Elsewhere, hunters are competing for the chance to kill endangered wolves.

“Her death also demonstrates that public education, law enforcement and solid science are needed now more than ever to recover endangered wolves, and that the last thing they need is to have their federal protections yanked.”

Point being, some people want to hunt wolves, despite their being an endangered species.

Can we hunt hunters? They aren’t an endangered species.

If you can’t tell the difference between a wolf and a coyote, then you shouldn’t be shooting either of them, unless you are defending your life.

Heh, and if you’re defending your life against a coyote, maybe it’s time to just let natural selection take its course…

Coyotes are incredibly common here, I don’t know if it’s a climate or competition thing, but they basically live in numbers similar to raccoons in other American cities, while I’ve yet to see a raccoon in town. If I needed to hunt a coyote to show my “Predator Master”-ness, I could just set a deck chair in my alley and wait after dark with a beer and a pellet gun.

Interestingly, this is a place where a very large number of people have small, coyote-targetable livestock (chickens, goats) in their yards, but I don’t hear any complaints about coyote problems. You can generally build around them pretty easily. Studies suggest that they subsist almost entirely on cats and small yippy dogs, so our cat has a strict sundown curfew. I suspect that the overwhelming majority of their kills are feral animals, though.

Hunting, it turns out, is typically counterproductive. The easiest members of a coyote pack to find and kill are the alpha pair. Doing so causes the hierarchy of the pack to dissolve: the alpha pair is also the breeding pair. When they are dead all pack members begin breeding. Coupled with coyotes’ versatile diet, significant hunting attempts generally results in coyote population booms.

Ironically, the one thing that seriously controls coyote numbers is the presence of wolves, who out-compete them and hunt them when they get a chance. Our extirpation of wolves in the lower 48 has radically increased the numbers and range of coyotes.

The idea of wilderness needs no defense. It only needs more defenders.

Lots of American suburbs have coyote populations, including where I grew up. I didn’t know anybody who hunted them though. My view is that if you let your pet roam free in the neighborhood then you’re accepting the risk of it being attacked by native animals.

What if it’s both? Coywolf (sometimes called woyote) is an informal term for a canid hybrid descended from coyotes and gray wolves. Hybridization between the two species is facilitated by the fact that they diverged relatively recently (around 55,000–117,000 years ago). Genomic studies indicate that nearly all North American gray wolf populations possess some degree of admixture with coyotes following a geographic cline, with the lowest levels occurring in Alaska, and the highest in Ontario and Quebec, as well as A...

If it’s actually a coywolf, I would guess the local population of both wolves and coyotes is large enough that neither should be considered endangered, at least locally.

“Mistaking her for a coyote”…

Yeah. And I bet it was coming right for him, too…

OK, that was low. If the hunter happens to see this - I apologise for that. When you realised your mistake, and saw the collar, you reported it. You’re evidently an honest guy.

But it’s kinda sad that so many other hunters are this bad that everyone’s first reaction is this cynical.

I know a family in Philadelphia, home-schools their kids (because: Philly school system, and: reasons [no, they aren’t conservatives, rather the opposite. anyway]). Kids like hunting. Eldest daughter (all daughters) wants a deer skin for her birthday. She wants to tan it. She really really really wants one. Her mom posted on facebook: “Anybody have a deer hide in their freezer?”

I guess in the circles they run in, that’s not such an unusual request.

NB: their house once had a ground-floor business, and retained the full-width windows. During TV Turnoff Week they’d host a… week-long… performance series; I performed there a few times; this was mostly pre-daughters. Although one memorable occasion was 12 hours after the home water-birth of one of them. I stayed there that weekend, and wondered why they didn’t cancel and still had me come down. Recently, the mom asked me why I didn’t cancel and came down the weekend of the birth. So it goes. Anyway, she worked for a Quaker organization counselling soldiers on how to be non-violent (I can’t remember the specific term right now). All of this to support the notion of #notallhunters.