Retrospective of netbooks, the tiny low-end laptops that lit up the late 2000s

Originally published at: Retrospective of netbooks, the tiny low-end laptops that lit up the late 2000s | Boing Boing

It’s one of that unexplainable confluence of factors that happened to converge at the right time: just affordable enough, just powerful enough (to be useful), just portable enough, to make it popular. As consumers got more sophisticated, they realized how much netbooks really sucked at everything.

I loved my eeePC. I ran SQL Server, Oracle 11, and postGREs on mine. It was all I needed for an Associates Degree in Information Systems. I miss it.

With Staples in lockdown, the only way to make paper copies is to scan with my old Lexmark printer/scanner. The crummy drivers don’t work in W10, Lexmark denies all knowledge of it, and I haven’t found Linux support for it yet. So, install the drivers on my XP netbook, tada!

Some day I might replace the battery, pop in a SSD, and give it a Linux makeover. 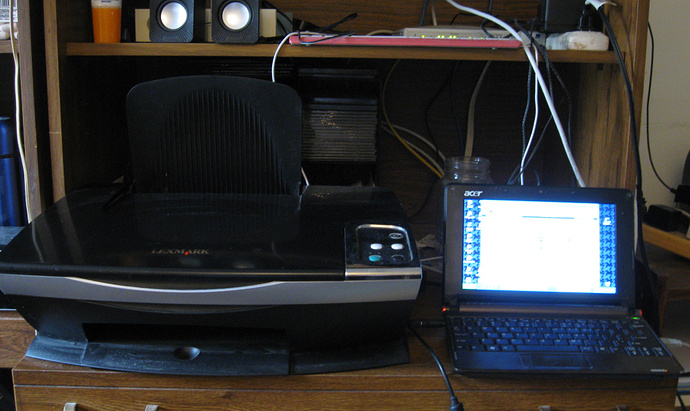 I miss my eeepc. I took it with me to Tokyo, and it worked out great. It was part of my journey running linux at home, though lately I’m all chromeos (easy/cheap) and win10 (games).

If only the keyboard hadn’t started going, or more importantly if I hadn’t sat on the thing and utterly killed the display.

I went through two or three netbooks back in the day. They were fine for getting work done on a train or plane, though my work only required Word and Excel. They paid for themselves several times over with the work I was able to get done while on the move (I was being paid on a workpiece basis, freelance).

I would buy a netbook-format PC right now if a good one was available. The hardware limitations were a thing. But the package had legs. I don’t need ultrabook thinness, but a netbook has the small weight and footprint combined with something like regular-laptop robustness, and I could use that.

I had an Eee PC back then. The only things I remember about it are installing some flavor of Linux, and giving it the name “Wee PC.”

Whereas I’ll never forgive smartphones for making the “smart” more important than the “phone.”

In my memory, netbooks are like the flip phones of computing, a step on the way to tablets.
I never had a flip phone, I went from the brick to the smart phone. But I did have a netbook (Acer). It was good mediocre, even for the time.

I still use my Acer AspireOne for a portable way to do admin tasks in the field. It originally came loaded up with an SSD and the only change I made to it was to dump Windows and install Xubuntu. I think most of the hate for these devices was a result of the sloggy Windows OS.

Back in the day I bought a 7" EEE pre-installed with Xandros Linux, which was way too resource-hungry for the tiny machine. Overwrote that with a version of Puppy, which is much smaller, faster booting, and lighter running while still being relatively complete. I never even bothered to backup the original Xandros first.

Looking around, I also have an Acer Aspire One (which I’ve set up to boot either Windows or Puppy), a Dell Mini 110 (also a dual-booter, which still sees some field use), and a Lenovo X131E.

I still have my Samsung NC110. I take it with me for writing mainly and it’s also Okay for browsing, email and media consumption. Yes, most tablets are faster nowadays and have Bluetoorh keyboards, but the convenience of a an all-in-one form factor is what I love about netbooks.

I was under the impression that netbooks never really went away - aren’t Chromebooks pretty much just netbooks, and pretty ubiquitous? Or is there a significant usability/feature difference?

I upgraded the ram to 2G, put in a SSD, and installed 64-bit Windows 7. Since it had no fan, the SSD meant that it had no moving parts, except the keyboard. It still works, but I think the thermal tape came loose from the keyboard (it uses the keyboard as a heat sink) and it starts to choke when it’s been on too long. One of these days I’ll fix that and install Ubuntu. Because yes, other than that, it still works just fine.

What people forget now is that the notebooks then were trying to be portable desktops. They had big screens, DVD drives, and some even had floppy drives. They were bulky things. When notebooks got thinner and lighter, the use case for netbooks went away.

A netbook was great for traveling. It could do web browsing and email. And it could do it while still being small and light. I installed Visual Studio so I could do development work.

I think there’s certainly an argument that netbooks are the reason we have tablets (and yes, this is one of those posts that reminds people that Apple didn’t invent the tablet) because they were proof-of-concept just before large touchscreens became viable for consumer products.

And yeah, it does feel as though they never really went away, with Chromebooks and things like the Raspberry Pi being the most obvious successors, albeit for different purposes.

My sister had a Samsung model. There was a botched Windows 7 Starter install on it that ran like custard, so I installed a lightweight version of Ubuntu on it and showed her how to google any weird issues it might end up having. I think these machines would’ve been better off running some version of Linux anyways, the Windows editions on them were pretty unusable.

Can I use it in the kitchen to keep track of my recipes?

I borrowed one (not sure of the model) for a time while I was unemployed during the Great Recession. I had a Macbook, but it was big and had a bad battery, and I needed the portability. It was a decent machine, and I kinda miss it.

I thing I remember seeing netbooks for sale at Target, one with Windows, one with Linux, so (if my memory is accurate) at least a few came with Linux out of the box.

I miss my eeepc

I dont; I am writing this on my 11-year-old eeePC901 right now. the even older 900A is for some occasional stuff when I need linux.

still great hardware, even if its a bit slower these days.