Then you have Oil-Is-All Texas. With Musk in residence (and his SpaceX benefiting from a 10-year tax break there… not to mention being allowed to get around environmental concerns at Boca Chica), I wonder how long the love affair will last. The thought of Big Petroleum coupled with very-pro-solar Musk plus his state government bennies… it just boggles the mind as to how things will go for all in Texas. Who would Musk have to personally schmear there in order to stop BP from sabotaging his solar efforts anywhere?

The difference is that public utilities are accountable and the people have political power to fix it. Nobody said it was all perfect, but the mechanisms exist to improve it. Corporations are accountable to nobody, least of all in an industry specifically set up for monopolized rent-seeking business models.

A thread on Charlie Stross’s blog went sideways into a discussion about the electricity market a while back. That shit is bizarre.

That’s just the price of freedom.

Charlie Stross’s blog went sideways into a discussion about the electricity market a while back. That shit is bizarre. 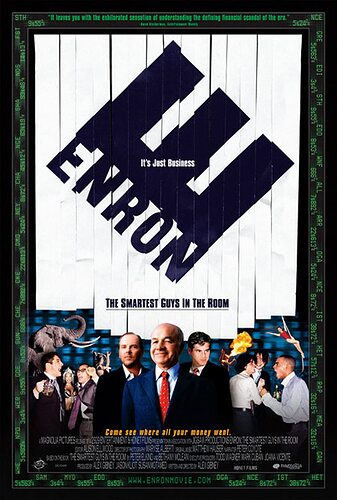 Enron: The Smartest Guys in the Room: Directed by Alex Gibney. With John Beard, Tim Belden, Barbara Boxer, George W. Bush. A documentary about the Enron corporation, its faulty and corrupt business practices, and how they led to its fall.

ERCOT is a public entity… a 501C3. They are the group that decides how the market works in Texas. So if there’s going to be a heavy incentive to build say 100MWh batteries with a 15 cycle response time, that’s coming from ERCOT, not one of the utilities. Similarly, if the market doesn’t exist for spinning reserve, they made that call. In NY, the NYISO decides what margin of spinning reserve needs to exist… same in California with CAISO, and NE with ISO-NE, etc. ERCOT is also the entity that decided not to make interconnections from them to either the eastern or western parts of the US.