The magazine is dead and the society irrevocably tainted.

Yes, but the humans inhabiting those groups are made of flesh, blood, and emotions, and the relationships and politics won’t be so clearly divided just because a piece of paper says they are. I mean, come on. These are homo sapiens we’re talking about. When, in the history of humanity, have things been any different?

Unfortunately. I used to look forward to getting the the magazine, no more…

I’m sure the new page 3 spread will be very educational.

NatGeo is already dumbed down, the publication is a long ways off from where it was 20 years ago.

I mean yeah it can certainly get a lot worse, as far as magazines go they’re still near the top, but with the decline of print media in general they’ve had to make compromises to attract eyeballs and it’s resulted in some really weak content.

Zulu bride and bridegroom in the November 1896 issue was the first picture of a bare-breasted woman in the magazine.

Sorry to say this, but as @beschizza had a slightly better image of Rupert, he wins this round…

Or in 15 years NatGeo will be dumbed down to “Ow! My balls!” Documentaries.

It already is. The fact-to-entertainment level dropped significantly ever since Fox took over their television media.

Cynically, the executives of the society now have $1,000,000,000 to fund elaborate trips for themselves, buy fancier offices, etc?

Seriously, I don’t see how this is a win for the world, just those execs making out on the deal.

Why shouldn’t he be held accountable for his crimes against humanity? Murdoch is like a virus that destroys all that it touches leaving only an empty shell of something once grand. As surely as we hung war criminals Murdoch should pay with his wretched life for the harm he does

National Geographic should have asked Tintin for advice. 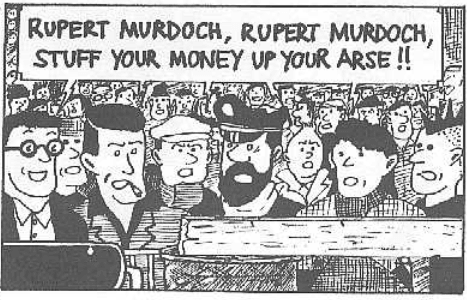 Came to say exactly that. Fuck, I don’t even care if it’s relatively painless (though I’d prefer something agonizing, natch). Just die already.

Yet another publication which will turn to complete shit which, shareing ranks with fox news, NY Post and Wall Street Journal.

When that arch-scumbag carks it, there’ll be fucking street parties worldwide.

This doesn’t have a snowballs chance in congress of being good news.