It is my understanding that mobile data rates wouldn’t be a net neutrality issue because they made a big flat cut to the fire department’s mobile data. They weren’t throttling service to just “sendhelpimabouttodie.gov ”, they cut all of their service. This is asshole behavior, but it doesn’t fall under net neutrality.

Exactly. This was a dreadful thing to do (to vastly understate it), but throttling traffic to/from all destinations =/= net neutrality.

Removing bullshit fees from the bill only works for POTS landline service because it’s tarriffed. Cable, fiber, and cell service are not tarriffed, and since deregulation, the carriers can charge anything they like.

I still think Verizon is taking too much blame here.

Yes, a mistake was made–the throttle should have been lifted pronto while the purchase order was being handled.

However, just because they are engaged in emergency services doesn’t give them the right to get something they didn’t pay for. They’re obviously using more data than they paid for and they hit a hard throttle. (Now, why they are using that much data is probably something they should be looking into…)

Now, why they are using that much data is probably something they should be looking into…

I’m just spitballing here, but maybe it has something to do with the western US being on fire? I can’t imagine anything these firefighters might be doing that might interfere with their full attention on counting every byte they use while coordinating fire rescue services.

The thing is, how much data would actually be used in firefighting? You’re not sending video around or anything like that.

Oh really? I seem to recall reading, in the other thread about this, that drone footage might have been part of that data usage. I can think of many other reasons why, in a major public emergency like this, that a hell of a lot of data might need sending.

However, just because they are engaged in emergency services doesn’t give them the right to get something they didn’t pay for.

Are you sure about that? AT&T (never dealt with Verizon on the commercial side) has the accounts called GEM - government, education,military (or is it medical? hard to remember). These accounts are setup according to local govt contract, federal law, and access agreements with states and municipality. These accounts can never have their access throttled or terminated even due to lack of payment. Why? Because servicing these public entities benefits the very community which is allowing the carrier to operate within their area. The only reason these companies can do business in your city, county, and state is because they are allowed to by the city, county, and state because those governments represent the people and providing a benefit to the people is what’s going to get you permission to make money off of them too.
It seems to me that cutting off or throttling service to your local government (police, fire, and other emergency services), a hospital, or a military installation should be prohibited if not by law then by contract. I can think of no reason such an agreement would not be in place before a carrier is allowed to string their first foot of line.

Oh pssh, it’s only human lives at stake; what’s that compared to all the money Verizon is losing?

This has nothing to do with net neutrality.

Not directly, but this is being brought up in the net neutrality lawsuit to demonstrate ISPs’ “attitude” toward quality of service and profits, and thus that they are not to be trusted with deregulation. When they innovate (one justification often given for deregulation), it is not to improving service, but to find a way to increase profits by manipulating how and how much they bill for basic service. If they are willing to throttle/degrade service in order to charge more, they will likely find a way to selectively throttle/degrade service in order to charge even more, unless net neutrality regulation is reinstated.

Verizon to fire department: you're exceeding your bandwidth while you fight wildfires, so we're throttling you boing

Show videos from drones where the fires are travelling. (Realtime footage from drones are BW eater #1) Show current setup of equipment to make firebreaks and progress. Realtime streaming of firefighting efforts (bodycam footage isn’t only for cops) Maybe some music or video for (rare) downtime moments.

Thanks. I was too preoccupied at that moment to go find it.
@Loren_Pechtel Still think it’s not an issue? (Downtime aside.)

There are other valid use cases in that thread, too.

Besides the video from drones you also have tons of people running mapping applications for coordination and not getting lost. There is also sat/air photo downloads for situational analysis.

But even if they’re running torrents for the latest copy of Madden these people are putting their lives on the line and don’t need to be put in danger over some penny pinching.

However, just because they are engaged in emergency services doesn’t give them the right to get something they didn’t pay for.

You are framing this as a moral question. Also, Verizon disagrees with you, FTA:

Verizon yesterday acknowledged that it shouldn’t have continued throttling Santa Clara County Fire Department’s “unlimited” data service while the department was battling the Mendocino Complex Fire. Verizon said the department had chosen an unlimited data plan that gets throttled to speeds of 200kbps or 600kbps after using 25GB a month but that Verizon failed to follow its policy of “remov[ing] data speed restrictions when contacted in emergency situations.”

Arguing over what people have a right to is just legalism.

It all boils down to this (see below), and no amount of rules will take the place of the general societal expectation to do the right thing.

“The Question” and your Mama

Verizon definitely messed up, but I am not alone in blaming the firefighters for not buying a plan that met their needs. If anyone should be aware of the need to be prepared for rare events it should be firefighters. Although fighting active fires is a big part of FD activity, they also do outreach and inspections to make sure everyone else is ready for the big one. Somehow I suspect it was the cowboy run and gun division that messed this up, not the preparation division.

Wow! Victim blaming the emergency services for doing their job in an almost unprecedented crisis; lady, I respectfully suggest you go and have a real long talk with yourself in the mirror, and report back on whether you actually like what you see.

lady, I respectfully suggest you go and have a real long talk with yourself in the mirror

Is @Loren_Pechtel female? “Loren” is normally a man’s name, but I think your sentence could’ve stood alone without alluding to gender. 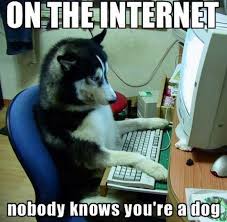 Huh? Somebody actually realized that “Loren” is male? Is the moon blue or something?

(The mistake is so common I normally let it be unless my gender matters for some reason. Just because it’s a purely female name now doesn’t mean it wasn’t the male spelling when I was born.)