Slow-motion footage of an airburst nuclear explosion hitting the ground

I’m kind of amazed they were still using nitrate films well into the 1950s. Safety films were available, all I can think is that either they had a big stockpile of film or some particular emulsion they needed for the application wasn’t available in the new stock.

A possible explanation is that acetate base is typically thicker and heavier then nitrate base. If you are using 35mm film at 60,000 frames per second, the film is moving at a mile a second. I believe they had a blank header that was several hundred yards long just to get the film up to speed. All the film had to be wound off one spool and onto another. The spools would have large cores, so you did not have to violently accelerate the emptying reel, while braking the filling one. Anything that would make the film lighter and thinner is a bonus.

There were custom emulsions too. There was one with three black and white emulsions, with sensitivities in the ratio 1:100:10,000 so you could capture exposures of a million to one with constant aperture.

Click on play button to stop autoplay for the two Dailymotion videos.

I know I’m being overly pedantic, but Teapot Turk was a tower shot, not an airburst.

As I understand it, it’s not an air burst if the fireball touches the ground.

The bottom one is Panic In Year Zero .

They really should be wearing gloves while handling that film!

An air burst can happen on a tower. You can see it is a tower shot by the bulges in the fireball because the charge runs faster down the supporting cables. The useful feature of an airburst is the shockwave and its reflection from the ground should combine just above the ground to form a Mach stem. This gives a single, horizontally moving nearly-cylindrical shockwave with more oomph to it for knocking over buildings. If you were going to have a fifties’-style city-leveller, then that’s how it works.

The fireball will typically detach and rise in a suitably photogenic manner. However, if it touches the ground, it is unlikely to find anything it can damage any further. I don’t think touching the ground is a big deal. But, I don’t claim to know.

As does this, just today: 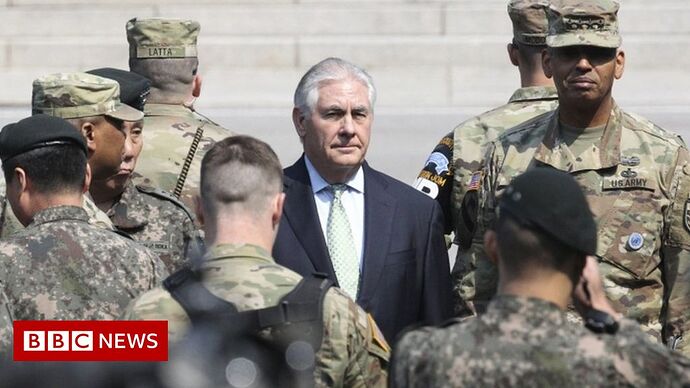 America's top diplomat says the US could strike if Pyongyang's weapons threat rises.

I am a little teapot short and stout
here’s a million candles, here’s the fallout.

And Trump wants to overturn our nuclear non-proliferation policy. Gorgeous.

From my own personal experience, I KNOW you had fun writing that.

“Tell em it’s the one with the force of a sun. With a gold that glistens towards solar systems” -Edan

This is just viral marketing for the upcoming world war.

I look forward to purchasing the boxed set.