Some interesting thought pieces on the role of Silicon Valley

First is an article in the New Republic about Soylent. Linked from there is an interview with Evgeny Morozov. Both address utopianism in the rhetoric coming from start up culture, centered on Silicon Valley. Thoughts?

Are we talking about the TV show here?

Because I was in tech VC for a while and that show is spookily realistic.

No, Silicon Valley itself as a socio-economic-political force in our world.

I haven’t seen it yet, BTW. Is it worth watching?

I’ve been surprised how smart it is. I think it’s worth a couple of episodes to see, anyway.

We need a community FTP server

It’s kind of on my list already… I do wonder about the role of popular culture as a means of normalizing things. How critical is the show in addressing some of the concerns that are raised in the two articles I mention, I wonder?

It skewers corporate utopianism quite handily.

It has CEOs riding around their offices on BMX bikes, and billionaires buying industrial blocks to make into a corporate walking utopia.

Sorry, this wasn’t a great answer, I got Stevie Wonder on Sesame Street in the other window.

Is it worth watching?

It’s more than a little problematic from a gender diversity point of view, but perhaps that was intentional?

It was okay - not worth turning HBO off in between GoT and Veep, but not great. It had its moments.

Off to read your links.

No one needs laundromats anymore — no one who matters, that is.

I’ve been following Ars Techica’s coverage of Soylent as they’ve iterated and matured the product.

It went from a chalky powder that I would never care to try for myself, to, now, a pre-mixed shake-ish thing that could replace a meal. And I’d try that.

The founder seems a little kooky, and they cover that at Ars, too. He seems to have…interesting motivations. But he’s definitely found a niche, and the cultural loanword “Soylent” has a special buzz that gets him in the door.

That’s what I liked about the TNR article, it points out that Soylent could be an useful product, the problem is with the ideology attached to it.

From The Guardian, above:

“I’ve become very strategic about my use of technology as life is short and I want to use it wisely. I have bought myself a type of laptop from which it was very easy to remove the Wi-Fi card – so when I go to a coffee shop or the library I have no way to get online. However, at home I have cable connection. So I bought a safe with a timed combination lock. It is basically the most useful artefact in my life. I lock my phone and my router cable in my safe so I’m completely free from any interruption and I can spend the entire day, weekend or week reading and writing.”

Whenever I hear this kind of talk I think of Professor Harold Hill singing about a pool table.

We’re afraid of new things, and sometimes it’s right to be afraid. Radium did a lot of nasty things to people.

Most of the time tech that is a net good goes from early adopters to mass adoption to ubiquity. Somewhere along that line between mass adoption and ubiquity, you get these reactionary folks who are stuck on “the old way.”

I don’t think that’s the case with Morozov, though. It’s more akin to the Luddites… they weren’t anti-technology, they were anti-technology replacing their jobs and impacting their livelihoods. He’s pointing out that just giving control to these technologies has consequences and we should be thinking hard about the role of new technologies and how they shape our lives.

Most of the time tech that is a net good goes from early adopters to mass adoption to ubiquity.

Technologies that come to the fore do so because of choices made, not because they are naturally better. Hell, there is still an ongoing debate about the killer apps of the 20th century - broadcasting and its role in society. We still can’t decide if that was a good thing or not. Just look at the debate we’re having on this board regarding the issue of Sesame Street, or how people will argue about the role of violence found in mass media and whether or not that’s been negative or positive for us.

Related, I think it’s worth thinking hard about the consequences of social change wrought about by technologies and economic ideologies. If silicon valley and it’s champions are connected to any particular economic mode of thought, it’s probably neo-liberalism. Here is an article that discusses the impact neo-liberal thought has had on higher ed: How college sold its soul to the market

Most of the time tech that is a net good goes from early adopters to mass adoption to ubiquity.

Aren’t you assuming this happens inevitably rather than people make it happen?

Technologies that come to the fore do so because of choices made, not because they are naturally better.

That’s two sides of the same coin. Whether you focus on the collective will of the people or the naturally superior choice (as defined by reality, not human whim), the end result is the same.

What is a “naturally superior” and how do you define that outside of “human whim”? Is putting people out of work, and people being pissed off about that really just a “whim” or just the reality that people are experiencing? The shift to an idustrial economy had consequences, not all good. It created revolutionary conditions that disrupted the old, but it’s still not clear it was all a net positive. Again, this is something that people have been arguing about for well over a century and a half now with no clear answer. Going back to Marx, he agreed that the overthrowing of the ancien regime was great, a step forward, but that the new elites weren’t necessarily in the best interests of the most people, and it was deeply disruptive and destructive to peoples lives in any number of ways. It caused great environmental destruction that we’re still dealing with today, it uprooted millions of people (many not of their own choosing), and in many cases, plunged people into a kind of poverty that still proves to be a black hole, even as the number of people who saw an improvement in their lives grew.

We can maybe think about this in terms of some specific changes and the debates they’ve inspired. We know that the industrial revolution caused serious environmental damage. Since the 70s, especially, there has been a movement to undo that damage or at least mitigate it. Yet, the oil and gas industry employs thousands of people, and it’s little surprise that environmentalists are often seen as out of touch with the realities of people who are beneficiaries of decent jobs (where little other options exist) and whose opportunities for decent employment will dry up with the end of the oil/gas business. I’m not trying to suggest that the environmentalists are wrong, just that it has a particular consequence that needs to be considered when we talk about these issues.

I think that @daneel’s link gets at that as well… what about the people who are being put out of business who run laundry mats? That’s a real world consequence that needs to be addressed, not just something to shrug one’s shoulders about, which the tweet seems to suggest.

I really don’t think I want the world being shaped too much by the likes of Steve Jobs, Larry Page, Jeff Bezos, Mark Zuckerberg et al.

Might as well add that Amazon story that was going around yesterday.

Know someone who works there, doesn’t sound like a lot of fun. To put it mildly. 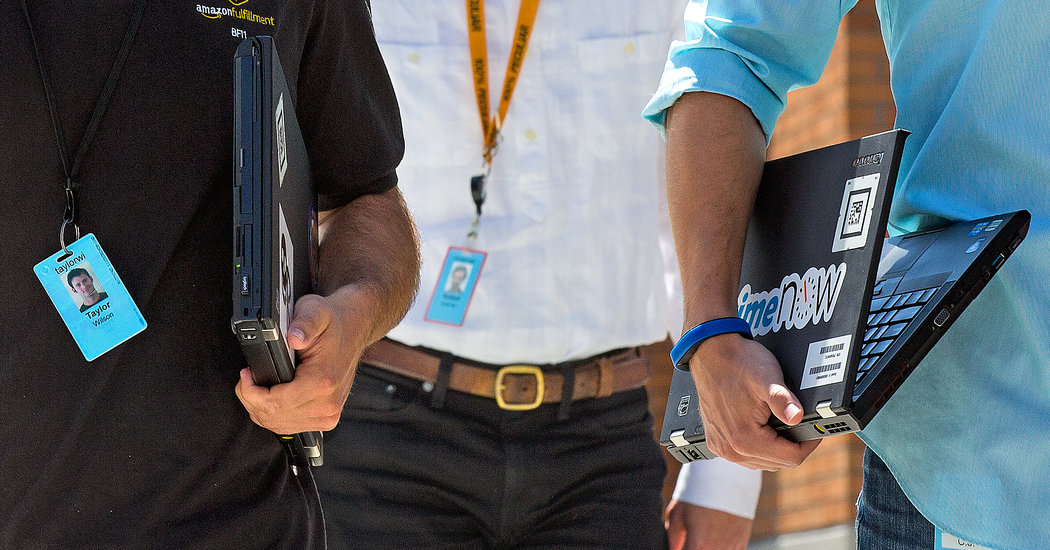 Inside Amazon: Wrestling Big Ideas in a Bruising Workplace

The company is conducting an experiment in how far it can push white-collar workers to get them to achieve its ever-expanding ambitions.

not just something to shrug one’s shoulders about

Alas, shrug I will right after I bow out.

When religion died for me, much of philosophy did, too.

I don’t want you to bow out. If you feel that the changes being discussed are net goods, then why are they? Honestly, I don’t think we’ll get anywhere just accepting changes, only when we discuss and examine them, and try to tease out the impacts of these changes, good or bad, will we come to some sort of consensus… But just because I disagree with you doesn’t mean I don’t want to hear what you have to say…

Also, Python is ALWAYS relevant! Always!!! And the films of Gilliam strike a particularly strong chord about the modern world (Brazil and Zero Theorem especially).

Because he apparently has no fucking will power to just ignore the internet or his phone? Cause those things don’t have power buttons and apparently scream USE ME NOW DAMN IT at him from the other room unless safely locked away? That screams I need serious help.

As far as soylent goes, enh, yeah I can see a market for a more healthy nutrition shake and thats fine and good luck with making it palatable and useful, but please leave your craycary at home when talking to the press guy.

That screams I need serious help.

Maybe, but isn’t this something that some people struggle with? If that works for him, why is that a bad thing?