In Soviet Russia (and every country with IoShit devices,) house sees you

I was quite pleased with my 8/11 until I came here.

That one I got based on guessing from the Cyrillic text.

Tred reading the cyrillic, instead of just looking at the topography.

3 or 4 years ago I was creating content for a game, and made extensive use of these Soviet era maps to recreate high fidelity versions of the geographical areas where the game was set.

Information, listings and some downloads may be found at :
University of California Berkeley / Stanford
http://library.stanford.edu/guides/soviet-military-topographic-map-sets

Download of many City Plans at Map Library of Catalonia.
http://cartotecadigital.icc.cat/cdm/search/searchterm/govern%20sovietic/order/datea/lang/en_US

Don’t feel bad. I was a map reader for four years for a flood data company. I had a lot of training to look for clues.

That was easy. I just read the multiple choices first. Took me about one minute to do the “test”.
Without being fed the answers I would probably only have known London, København and Istanbul, which I recognized at first glance.

Up to a few years ago, the Post Office Tower was officially a “secret” installation.
Book tip: 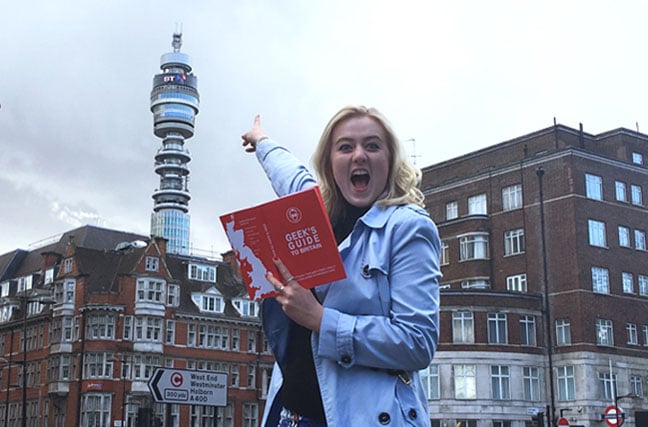 Geek's Guide to Britain – now a book. Permission to geek out granted

I guessed it correctly because I figured yes, the emperor would place his castle at the top of the hill.

Is it wrong I recognised most American places due to playing GTA?

Given that these are Russian maps, it may be better to learn the Russian version of Cyrillic instead of

whatever language uses both

Ghayn (Ғ ғ; italics: Ғ ғ) also known as Ge with stroke, or as Ayn (in Kazakh), is a letter of the Cyrillic script. In Unicode this letter is called "Ghe with stroke". It is used in the Bashkir, Karakalpak, Kazakh, Uzbek and Tajik languages, where it represents the voiced uvular fricative /ʁ/. Despite having a similar shape, it is not related to the Latin letter F (F f) or the Greek letter Digamma (Ϝ ϝ). In Kazakh and Tofa, this letter may also represent the voiced velar fricative /ɣ/. In Nivk...

Missed Edinburgh. If it hadn’t been multiple choice, though, I couldn’t have guessed some of these.

How did these maps help spies If the aren’t in the language of the countries they are from? I doubt if there are convenient Cyrillic street signs in any of those cities.

What the hell is worrying wrong with Tokyo?
It’s mainly one symbology, with nearly no contrast. Didn’t they bother?

Also, in general, has someone the time to make some qgis styles based on these maps?

And can someone who read the book (hey, I’m looking at you @jhbadger!

) elaborate on why they choose this symbologies, and palettes?
I’m working on maps since the late 90s, so I’m really curious. Granted, I mostly don’t map cities, but as of recently this might actually happen. Scale has also gone down, my first maps were global, now I’m on 1:2500. (What a pity.)

Well, the yellow shading was to indicate the highest level of urban density, but given that Tokyo is all pretty dense, they should have normalized it. But yes, they seem to have done a poorer jobs on the roads than in most of their other maps, which isn’t really explained.