I regularly watch programming from Japan’s NHK World. I am always impressed by the assumed level of interest and education of their viewers. Where we might get a watered-down story full of analogies, even their current events segments can dive deep into obscure but relevant technical arcana to educate the viewer. It’s something we might see in a popular science show here, but on the evening news.

It’s nothing new but it is a great reminder on how bacteria and viruses get aerosolized. Another reminder is that COVID-19 transmits via fecal matter as well and flushing toilets aerosolizes poop which also lingers for quite some thing so if you’re using a shared or public bathroom you might want to be extra careful (or hold it).

So, I’ve still been going out for bike rides & runs (allowable, for both errands and exercise, under the New York and New Jersey shelter at home rules), but they sometimes take me on some bridge paths that are narrow. One of them in particular just barely allows for 6 foot margins.

There were a couple of people I spoke loudly to on that bridge yesterday, suggesting politely but pointedly that it’d be much better if they switched up such that they were walking or running SINGLE FILE. I’m feeling sorta badly about that now.

Now, I don’t think I’m carrying the virus (my exposure to potential carriers has been extremely limited since at least March 13, and I’ve had no symptoms). But whatever chance of good my elevated-volume speaking did in correcting others’ behavior may well be outweighed by the chance I was aerosolizing something infectious in the act.

Incidentally I hadn’t as-yet been wearing a mouth covering, but plan to from today forward.

Warmed the old cockles of my heart. /s

British news was like this until quite recently – maybe 10/15 years ago? It’s gone Full CNN since. Coincident with 2008 financial crisis but who knows. Panorama is still good but it definitely has the simplified, assume-no-education news milieu.

The provided low-res video on the BB article is part of a one-hour documentary (high-resolution). 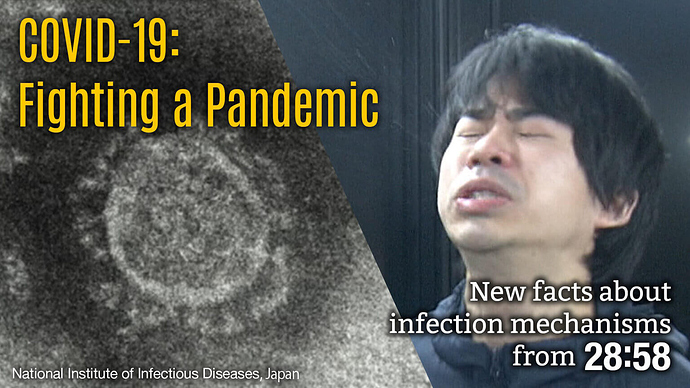 What can be done to stop this mysterious virus? Researchers are working to contain the spread, and are learning new facts about infection mechanisms. The latest research reveals how tiny droplets carrying the virus can remain in the air for some...


Just in case, if you just want to watch a higher resolution version of the provided low-res video, that section starts at 0:28:34 and ends at 0:35:13 of the above video.

This is terrifying, but quite necessary for public information. (The permanently floating sneeze-detritus puts me in mind of Stranger Things’ Upsidedown realm.)

I suspect the main benefit of everyone wearing face masks might be a reduction in aerosolized droplets from carriers. It most certainly won’t stop them all-- we make our clothes out of breathable fabrics that are lousy at stopping something as small as a virus-- but all of that humidity condensing behind the mask probably means fewer of the finer particles hanging about in the air.

Oh dude, have no doubt whatsoever. Stand upwind of people. There are many accounts of covids catching it in meeting rooms, despite employing every precaution they were informed about.

I think virologists and epidemiologists were very aware of all this, but they’re shouted down by the mayors of Amity in the interests of keeping the beaches open.

It’s not “airborne” like spores, but it is to all intents and purposes, especially in close human contact, airborne.

I’ve had it. Not fun. No docs or medics involved, but +21 days and still symptoms.

Yes. I think everyone agrees that cloth masks are not the best thing for medical professionals to wear to protect themselves. The primary benefit of mask wearing by the public is to reduce transmission by potentially infected people, and all evidence suggests that literally anything is better than nothing.

That said there is a lot to like about cloth masks for general use, in particular when there is a shortage. Cloth masks are much easier to safely reuse as they can be washed. A lot of people out there are reusing disposable masks but they are difficult or impossible to sanitize between uses.

Another thing to keep in mind is that there is a wide variety of fabrics and mask designs. That is one of the problems but also an opportunity to fine more effective alternatives.

There have been filtration tests on different materials which aren’t the same as epidemiological studies, but they show that different types of fabric masks range from about half as good as surgical masks to slightly better – when clean and dry. A frequently cited problem with cloth masks is that they get wet from humidity in your breath and become less effective. This also suggests that they aren’t the best option for a medical professional to wear for an 8 or 12 hour shift, but if you put it on before you go to the grocery store, and carefully take it off when you get home, wash your hands and the mask, and let it dry before using it again you probably can likelyget some protection. But this is more speculative than the idea that it just reduces the amount of droplets you spew when you talk or cough in public and protects other people.

I suspect the main benefit of everyone wearing face masks might be a reduction in aerosolized droplets from carriers.

That’s is a big benefit, but previous research with SARS showed that wearing a (proper) mask is very helpful to prevent infections (more so than hand washing, even).

If you’re talking about making a mask out of, say, t-shirt fabric, it’s not ideal (even with a couple layers), but the virus isn’t free-floating, but part of a droplet, which is much bigger and more likely to get snagged by the fabric. Also better materials are available.

If you’re talking about the virus penetrating clothing, it doesn’t much matter - the virus on the skin isn’t the issue, just keeping it from the nose/mouth. Taking a shower after being in public takes care of the issue, even if it is slightly paranoid.

Keeping 6 feet of distance probably won’t totally stop you from getting infected, but I guess it will make the chance a lot smaller, especially outside with wind blowing. So it will probably help in flattening the curve. It’s never a binary thing. To stay alive you need to do shopping. To keep the hospitals open you need the (best) masks in the hospital and not hoarded in some basement. It’s all about reducing the chance of infection, because totally avoiding it is for most people impossible I think.

Still, wearing some sort of mask is probably a good idea.

The thing is, until the vaccine arrives, which is (optimistically) at least a year away, some sort of measures need to be taken when in vaguely close proximity to other people in enclosed spaces. Which means wearing a mask (on top of religious hand washing).

Health authorities, in initially not recommending wearing of masks as a ubiquitous practice (advice which they’re now reversing), there was an unspoken trade-off - they wanted to avoid hoarding and have the good masks available to slow the spread among medical workers, which they saw as being more important than slowing the spread in the general population. The evidence suggests this is a lot more airborne than was initially being discussed, and everyone wearing masks (even if they’re not ideal) looks to be a very good idea.

I’ve had it. Not fun. No docs or medics involved, but +21 days and still symptoms.

What are they telling you in terms of when you can go out in the world again after your symptoms end? Are you like immune after that and can go within 6 feet of people without fear (well unless it mutates)?

Incidentally I hadn’t as-yet been wearing a mouth covering, but plan to from today forward.

Nothing at all. I’ve been looking into viruses that colonise the lung lining - I rather suspect it can enter your lungs again, multiply enough to give you a sore throat, chest, sinuses, make you spread it, before the immune system fully kicks in.

Update on this - I tried out a bandana this morning before heading out to ride, but couldn’t get enough air through it. I packed it/had it with me, but didn’t actually use it while riding.

Most people I saw out and about who were doing strenuous exercise seemed to agree with that and weren’t masking. The cyclists who did wear them were just puttering along, not really moving at speed.