Starving sea lions are washing on to California by the hundreds

This is very bad.

I have been volunteering at the marine mammal center to help prep fish for the poor guys. They need more help!

Our ocean pastures are no longer able to sustain marine life. Taking pity upon and feeding adorable sea lion pups for a few weeks makes for great PR and likely command a lot of clicks on “donate here buttons” but then sending them back to oceans where they will starve again doesn’t save those cute pups. Over Christmas the news reports were of tens of thousands perhaps as many as a million sea birds starving in the NE Pacific from Mexico to Alaska. The same goes for the sardines for which fisheries officials have just this week had to ban all fishing of to try to save what few remain. In the North Atlantic the sea birds are dying too… and off the coast of Australia, and the anchovies off the west coast of South America, so don’t be fooled into thinking this is some sort of regional North Pacific Ocean mystery.

We have neglected our ocean pastures for ever and they are in a state of collapse. We all know that being good shepherds on land means taking care of pastures if we want to have animals living there. We can do the same for ocean pastures and replenish and restore them to health and abundance immediately and inexpensively… Becoming good shepherds of our pastures on land and at sea is what it takes. It Just Works… http://russgeorge.net/2015/03/10/starving-sealions-perish-in-californias-dying-ocean/

What expert blames this on global climate change? I live, fish and surf in California, and indeed the water has been really really warm this year (63 degrees off San Francisco! Woo hoo!), but I haven’t heard any expert attribute this to climate change. In fact the ocean was a lot warmer in 1997. You can argue that 1997 was an El Nino year and this year isn’t, but that’s largely a technicality, and this year meets many of the criteria for El Nino anyway.

But now the winds have started again, which causes upwelling (cold water coming up from the deep) and the water is back to a frigid 54 degrees and falling.

There’s lots of further reading on the subject but here’s the first google hit I found: 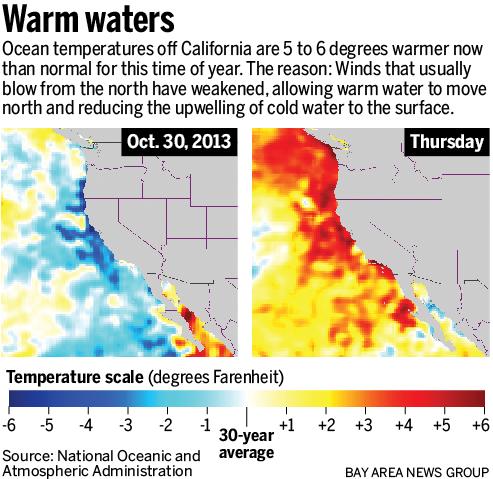 The whole condition is indeed alarming and disorienting to a lot of species, as it was in 1997, but invoking global warming for things like this plays into the hands of people who want to dismiss the whole concept as alarmist.

The Great Lakes of North America are also seeing depletion of natural species. 20 years ago ‘rock bass’ were a bait stealing nuisance, These days, good luck catching one. Frogs, sand clams, fresh water weeds, all disappering. I’m no marine biologist but everyone can see the change happening. Pollution and invasive species, over fishing… everything to do with humane intervention. But if it puts money in the pocket, no one is going to care until they learn they can’t eat their money.