I do hope nobody is surprised/shocked by this revelation…

I’ve had to explain this to laissez faire fans before.

There’s an article in the Atlantic talking about the decline of populism in the Democratic party. Most of it concerns the replacement of broad “anti-monopoly” doctrines with something narrowly focused on consumer prices. 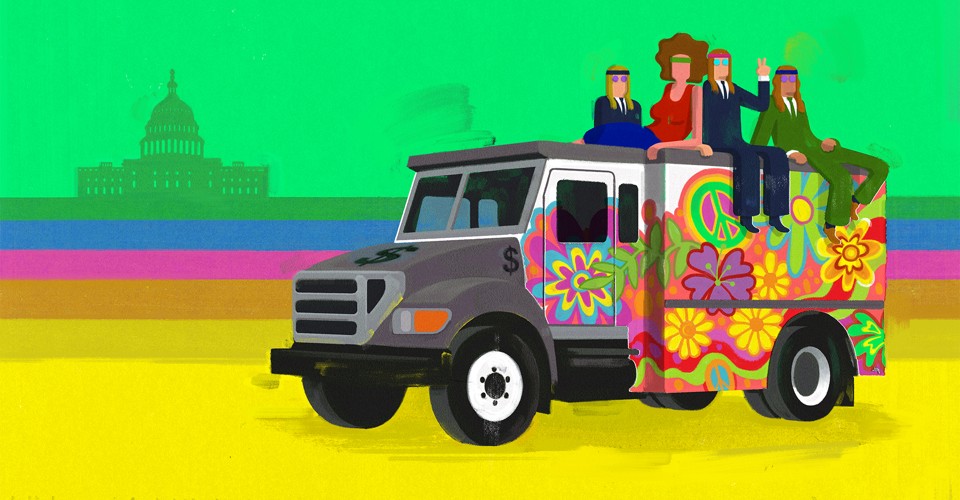 On the right, a finance-friendly school of libertarian intellectuals known as the Chicago School targeted Brandeisian competition policy. Michael Jensen, a Milton Friedman-influenced financial economist, argued that “our form of political democracy” threatened the large corporation. Government rules, labor power, and antitrust policies were scaring businessmen into not investing. This type of thinking became known as the “capital shortage” argument: A lack of investment capital caused a lack of goods and services and, thus, inflation. Inflation then destroyed more capital, worsening the shortage. The corporation, to Jensen, was property—not FDR’s public trust—and inhibiting the use of that property by shareholder owners was the reason for economic malaise.

Another Chicago School libertarian, George Stigler, argued a theory of regulatory capture. It wasn’t Wall Street or corporate corruption that broke America’s transportation system, he said, it was the incompetence of New Deal regulators themselves, acting in the interests of the industries they were supposed to be regulating. The answer was to shield the corporation from inept regulators and deregulate. Essentially, Jensen and Stigler offered a restoration of the pre-FDR view of property rights.

Inserting democracy into the commercial arena with competitive markets was “a charade” and “the last eruption of the exhausted mind.”
And the most important architect of this intellectual counterrevolution, the one who engaged in a direct assault on traditional anti-monopoly policy, was the libertarian legal scholar Robert Bork. His book The Antitrust Paradox undermined the idea of competition as the purpose of the antitrust laws. Monopolies, Bork believed, were generally good, as long as they delivered low prices. A monopoly would only persist if it were more efficient than its competitors. If there were a company making super-charged monopoly profits, bankers would naturally invest in a competitor, thus addressing the monopoly problem without government intervention. Government intervention, in fact, could only hurt, damaging efficient monopolies with pointless competition and redundancy. In an era of high prices, a theory focused on price seemed reasonable.

As for the hourly bill, that’s in line with what the lawyers get, and if the argument hinges on economic arguments rather than legal ones-- well, then.

Mommy told me to be a famous economist, but did I listen?

Thank you Wikipedia:
For instance, when hired as a consultant to create a new company logo, Dogbert proposed using a piece of paper with a circular stain from his coffee cup as the Brown Ring of Quality.

First Priebus, now Joshua Wright: I’d be laughing at all the suckers who voted for this orange grifter if it was only them who’d have to pay the price.

I remember an accusation once commonly, if somewhat childishly, leveled at economists.

If you know so much about money, why aren’t you rich?

And now we have an answer to this conundrum.

if I had a time machine I would tell my past self to specialize in one thing so I could be a testifying expert for lawyers. its a chill job - have the lawyers draft up your report, modify it so you wont get your credibility destroyed and thwart your future job prospects and testify for half a day or so about the report. then bill them $750/hr for the privilege.

Notorious and ultra-libertarian? Never have I been prouder to be a graduate.

Yeah, well economics is ideology, not science, anyway. You can “plausibly” justify any kind of social system you want with it, as long as the mark doesn’t realize it’s all bullshit.

Not at all; I can walk around with just the subscription cards for The Economist and people throw budget powers at my feet. Wait, that wasn’t me…nuts.

George Stigler argued a theory of regulatory capture. It wasn’t Wall Street or corporate corruption that broke America’s transportation system, he said, it was the incompetence of New Deal regulators themselves, acting in the interests of the industries they were supposed to be regulating. The answer was to shield the corporation from inept regulators and deregulate.

Not only is this not science, it’s not even logic. If the regulators’ incompetence caused them to work in the interest of their charges instead of impartially, then that’s to the industries’ benefit! If I were an industry I’d rather have them putting a thumb on my side of the scale than leaving it alone.

A monopoly would only persist if it were more efficient than its competitors.

A MONOPOLY DOESN’T HAVE COMPETITORS! That’s the definition of “monopoly!” Who is stupid enough to buy this, much less for $1000/hr?

Yeah, well economics is ideology, not science, anyway. You can “plausibly” justify any kind of social system you want with it, as long as the mark doesn’t realize it’s all bullshit.

You can do empirical economics.

And empirical evidence tells us that the Austrian/Chicago trickle down bullshit doesn’t work, and has all of the downsides that its critics have been highlighting from day one.

The only question left is whether the (relatively few) academics supporting it are merely incompetent or if they’re deliberately promoting a scam on behalf of the 1%. For at least some of them, it’s the latter.

I wish I (or anybody, for that matter) made $1k/hour for something worthwhile.

Having taken a number of econ classes as being friends with working economists, I can honestly say that they’ll use any poorly-sourced datum they can find to help “prove” their theory. It’s all bullshit.