Summary: you work to earn money. You pass some percentage of your earnings to some people you’ve never met and would probably detest if you were to meet. They take your money, don’t even say thank you, act recklessly with it, and keep the party going for one more night.

Method 1: Go on E*trade, choose some companies you like or that you think might do good stuff soon, buy some stocks, then bite your nails while hoping you make a profit. You might get lucky! You probably won’t.

Method 2: Hire a financial advisor, open a Roth IRA, put your money into long-term funds, don’t worry when things go up or down, contribute to it yearly and wait until you’re 59 to withdraw your market earnings.

Hire a financial advisor, open a Roth IRA, put your money into long-term funds, don’t worry when things go up or down, contribute to it yearly (which is tax deductible)

Forgive, but i didn’t think a Roth IRA was deductible on contribution. Instead the proceeds are tax exempt. My understanding is that Non-Roth IRAs are deductible, or rather tax deferred.

Please correct if i have that wrong.

Sorry, you’re right. I mis-phrased that. There’s a tax credit for certain amounts of Roth IRA contributions, that’s what I was thinking of. But yes, they are also tax-deferred if you don’t touch them until you’re 59.5 years old. I removed the ‘tax deductible’ bit.

Not sure this is 100% accurate. When you buy a share of AAPL or IBM, they never see that money, except at the IPO. Every transaction after that is between people/entities that are not AAPL or IBM. You’re betting against others on the future profitability of those companies and they are trading on the hope that is reflected in those bets.

When you buy a share of AAPL or IBM, they never see that money, except at the IPO.

Or when they issue more stock, or sell company-owned stock they’d previously reserved. Which is pretty common.

That said, even companies with no intention of doing a subsequent offering care deeply about their share prices/market capitalization. They affect the company’s overall performance in a thousand little and big ways, even if not a dime of new money is coming in from stock sales.

But money from the day to day investor, rather than someone buying into a secondary offering, isn’t getting to the company.

I understand that share prices/valuations matter to the execs though whether the 90 day earnings call death march is a good thing is open to debate. But the “buy a share, get a dividend/payout” model in the video might be oversimplified.

Dear old Kondratiev… If ever anyone works out how to prevent the boom-slumps, maybe the world will achieve some stability - if we don’t all fry or drown with climate disaster. Am I the only one who sees this as a shameless plug for capitalism?

Oh sure. You’re right, 99% of the time, stocks changing hands doesn’t make the company any money.

Well, there’s also method 1.5, which is the same as method 1, but you put some effort into picking reasonably valued stocks (ie. low P/E, low P/B, good RoI, a history of reliable and preferably growing dividends), and as a result you will probably get decent returns. All investing obviously has an element of luck, but if you aren’t chasing short-term profits via rising stock prices alone (and you shouldn’t be doing that), minimizing the element of luck is a good idea.

Of course, method 2 is a lot easier, especially for people who tend to be impulsive, or are compulsive worrier types.

I always recommend that young people (and really all people) invest in the entire market, through index funds, rather than buy individual stocks.

It’s been observed that if Trump had done this with his inheritance instead of trying his hand at a bunch of harebrained business schemes over the decades he’d be worth several times as much as he is today.

Of course in his case “making money” was a secondary concern after “trying to make the world see him as a brilliant celebrity businessman by slapping his name on stuff.”

Or you could just get a stocks and shares ISA and invest in that tax free.

Do stock markets deliver capital to firms, thus financing economic activity? Or do they just return the profits to capitalists? The technical term for this figure is “net equity issuance.” Judge for yourself: 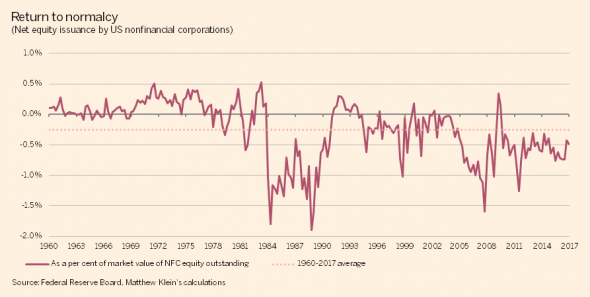 Become a dirty President of a major global economic power. Keep announcing trade wars and tariffs with competing economies (preferably a scary one far, far away). Have your fund managers arbitrage the prices and …

… walk away rich, having cheated everyone.

You’re assuming too much intelligence and competence on behalf of Trump. He’s not doing this to make himself rich(er), he’s doing this because he’s a moron who doesn’t understand economics or diplomacy, and who has a narcissistic need to always look tough and to “win” by making the other guy lose.

And honestly, it would be better if Trump was the kind of ruthlessly self-interested but intelligent person you’re describing. He’s so unpredictable because he’s so goddamn stupid; you can’t even count on him to be acting in his own interests, let alone the interests of GOP or the America, because he has the attention span of a gnat with ADHD, and no goddamn clue what he’s doing or how anything at all works. Hence his bullshit about the tariffs meaning China pays money to America, for example.

Heh. Now where have I heard that before?

Believe me, he has an army of people paid to make him richer. If he can remember to quote these soundbites from his traders, he makes money.