Instead of posting ThinkGeek’s latest Star Wars-related tchotchke, maybe BB could spend some time highlighting something like this. Or, hey, this, too.

I like the OBDLink MX. I use my phone plan for the data and connect the stereo to the Bluetooth, so wi-fi was about the only band left for me.

You have to admit though, that sounds a lot like work.

Much easier to just complain about soup.

The Apollo Lunar Module called it the “Master Alarm”, and it was just as useless. My favorite quote from the period, by Bill Tindall;

If this is not fixed, I predict the first words uttered by the first
astronaut to land on the moon will be “Gee whiz, that master alarm
certainly startled me.”

As it happened, the master alarm went off several times in predictable ways, forcing the pilot to decide whether or not to abort the whole mission based on faulty inputs. 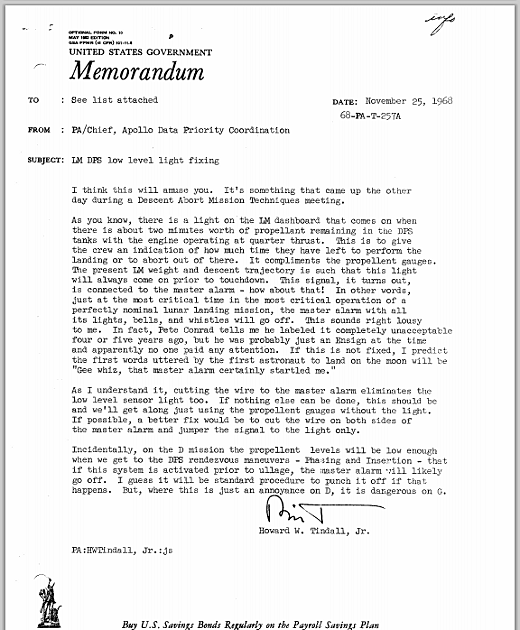 Whilst working as "Chief of Apollo Data Priority Coordination" during the Apollo space program  — or, as  Gene Kranz  fondly labelled him, "...

my 88 Fiero has a computer interface to diagnose problems but shorting 2 leads on the interface will make all the dash lights blink in sequence. You can just look up the flash code to find the problem. Great little hack from Pontiac for owners who don’t own a car computer. I wish more companies thought about it like that.

Why instead? We can have both.

designs an Engine Jedi, an animatronic Yoda figure that shows the engine error code severity by his posture

I solved the problem by spending less than eighty bucks to get a device that talks to my phone to tell me what the light is actually saying and gives me the ability to reset the thing.

I did the same thing, not realizing the device has a small lightbulb in it that stayed on permanently and drained my battery. Then the bike wouldn’t start and the CEL was solved.

“Works with multiple apps available for your iDevice”

"Works with multiple apps available from the app store:
[…]

Aaaarrrgghhh… whoever wrote that product listing needs to be stopped before they commit further crimes of confusion. Does this person think Apple has the only app store or computing devices in existence?

The one I have turns itself off and on. Wicked smaht.

Check engine lights can also lead to a problem on Toyotas. Seems that if the check engine light comes on, they disable the electronic stability control for the car. Sensor bad? Running hot? Gas cap off? Screw you, time to turn off a safety feature of the car.

Most auto parts stores will read from the OBD II port for free, and give you a list of possible causes.With, of course, the caveat that they have no responsibility for being correct.

Sadly, California has decided that us peons are too idiotic to apply our own caveats and thus don’t allow auto parts stores to read it.

You can just look up the flash code to find the problem. Great little hack from Pontiac for owners who don’t own a car computer. I wish more companies thought about it like that.

Good old OBD-I. I believe many GM cars of the era did that. Due to an engine swap, my '87 Jaguar is now officially a '93 Chevy Caprice, and though I do have a real code reader, I still have the small loop of wire I could use to short those terminals. Only the check engine light would flash, but to the same effect: 2 flashes followed by 7 flashes meant a Code 27, which you could look up in the Factory Service Manual (which is three inches thick, covers only 1993 Caprices, and is the most complete service manual you can obtain).

But the Check Engine light isn’t completely useless. In my more recent cars, if the light illuminates and burns steadily, you can generally just keep driving until you get around to fixing it. If it flashes rapidly, however, you should pull over and stop as soon as you can. And most modern cars have separate lights for other things, like an oil pressure idiot light if it doesn’t have an oil pressure gauge, and if that one comes on you’d better kill that engine quick (though the damage may already be done).

I submit that the stupidest warning light I’ve ever seen may be the one for low windshield washer fluid. When it first comes on, the reservoir is probably juuust low enough that going around a corner triggers the light, and out of the corner of the eye my heart skips a beat thinking it might be a low-oil warning at first glance. (Except then it would be red instead of amber.) And then I have to put up with an annoying light until I get around to buying a jug of fluid. Personally, I’d rather just run out of fluid and let the dried bugs on the windshield serve as my reminder to go to Autozone.

The one I have turns itself off and on. Wicked smaht.

BatterySaver™ Technology – Plug it in, leave it in — without the danger of draining your vehicle’s battery. Fully automatic, no switches or button presses required!

That’s not always the case. The most common reasons it comes on is a loose gas cap, which you will need to fix and probably after that it would be an O2 sensor needing replacement. After those two, a lot of the codes that get thrown by the engine are short lived events, like a misfire from water in the gas, and after a certain number of cycles (key on, key off - how many depends on the make/model) the light will go off.

My issue with it is the complete lack of gradation in meaning.

Does “check engine” mean “see a mechanic at the next convenient time?”

Or does it mean “turn off the ignition now to avoid throwing a rod?”

But it probably won’t warn you about anything that would cause the engine to throw a rod. (-:

my 88 Fiero has a computer interface to diagnose problems but shorting 2 leads on the interface will make all the dash lights blink in sequence. You can just look up the flash code to find the problem. Great little hack from Pontiac for owners who don’t own a car computer. I wish more companies thought about it like that.

Wow, you have a fiero that still runs? That’s like an act of god.
I had a 1987 V6 Fiero and it was the single worst car I have ever had the displeasure of owning. It was fun to drive, but I basically gave it away when I bought my first VW in 1995…

If you have an Android phone, Torque is free and good.

We now live in an era when so many cars come with screens for the GPS/Entertainment/HVAC systems, there’s no good reason why the cars can’t display, in plain if somewhat technical language, what the hell’s wrong with them.

But we’re also at a point where nobody bothers learning how to fix their own cars anymore (and they’ve gotten complicated enough where there are fewer and fewer user-serviceable parts anyway), so the screens might as well say things like “I don’t feel in tip-top shape. Can we schedule a service appointment in the next week or two? Shouldn’t take more than a couple hours and cost $200” or possibly “It seems a fuel line has burst, and though I have cut power to the fuel pump, I have nevertheless caught fire. Please pull over and exit the vehicle immediately, and don’t forget those 50-pound passengers in the back seat, as I suspect you may value them. Emergency personnel have been summoned. It has been an honor and pleasure to transport you in safety up until now. Please consider purchasing a Toyota next time.”

So get your own Bluetooth code reader for $10 on Amazon. Should be one in every glovebox.