The computer, tool of capitalism

Of course, away from the influence of bureaucratic Stalinism, the story turned out rather differently.

It’s pretty hard to argue with Stalin on this one, given the uses we put the things to. It wasn’t a tool of capitalism that he could afford to ignore; but it certainly does an excellent job as one.

Actually, by the 1970s, computer science (or “cybernetics”) was quite popular in the Soviet Union as well. The Institute of Cybernetics in Estonia (then part of the Soviet Union) was probably the top CS research institute outside of the West at the time.

I’m not sure “Cybersyn” is really a good example though. That was a product of Stafford Beer, who was kind of a crank. The much vaunted Cybersyn “control room” wasn’t even computerized – pressing buttons on the James T, Kirk-style control room instructed people to change slides.

Also, a large point of computerization is automation, which exists to reduce the amount of labor needed to do a task. This makes sense in a capitalist context with employers wishing to downsize, but not so much in a communist one where the goal is full employment,

I have a degree in Cybernetics. Am I still allowed to be a Cultural Marxist?

It is at least possible to reconcile the employment-based issues(the communists were certainly extremely enthusiastic about advances in machine tools, assembly line production, and other industrial automation, they were shooting for a revolutionary-post-industrial mode of mystically-not-alienated labor, not attempting to restore a pre-industrial artisinal mode of production), so computerization wouldn’t be a fundamental issue; but, unless one specifically works to avoid it, computers are definitely the biggest news since machine tools when it comes to the balance between capital and labor.

(On the other hand, communist theorists might actually be quite pleased with what computers have wrought: When Marx and friends were writing, the state of automation was sufficiently primitive that more or less only the low-skill industrial underclass were being squeezed to death by capital, while the talk about how the petit-bourgeois were heading for the chop at the hands of those they culturally identified with; but did not have the capital to keep up with, was mostly theoretical. Now, Not. So. Much. The capabilities of expert systems in formerly skilled, white-collar, work have made the helotization of the petit bourgeois an empirical reality.)

Going by Lenin’s definitions, full employment would be a goal in a socialist society, not a communist one.

It’s been a while since I’ve read up on the details of how things worked under Stalin, but as I recall, in accounts of the theory of state capitalism, it was pointed out that there was significant unemployment in the Soviet Union, which they tried to paper over by various means. Full employment was a goal, but there was a contradiction with the pressures on managers to produce efficiently under tight budgets.

Am I still allowed to be a Cultural Marxist?

Only if you can explain that Berio joke to me. Or Mr Beschizza’s Dune reference. Both made those whooshing sounds.

Maybe I’m missing something about the Beria joke, but I thought the meaning was obvious, just not particularly funny: Stalin was willing to let the military use computers, but wanted to maintain the pretense of not approving of computerization.

The Dune reference is to an element of the backstory: the Butlerian Jihad. Millenia before the start of the first novel, Dune, there was some sort of uprising in which humans, afraid of AI, destroyed all computers and most forms of advanced technology, and there remained a lasting strong prohibition against developing them again. Interstellar navigation, for instance, depended upon the abilities of the Navigators of the Spacing Guild, a subspecies of humans who were scarcely recognizable as humans anymore, due to the radical changes they had gone through in order to become capable of their feats of navigation. Why, exactly, the Butlerian Jihad happened, and why its prohibitions remained in force millenia later, isn’t directly explained. However, a few characters express contempt for the limitations of digital technology. Also, there’s an argument (in one of those quotes from imagined scholarly works that start off chapters) that the aristocracy deliberately avoided industrialization, because it would involve the development of a middle class that would threaten the aristocracy’s position.

but I thought the meaning was obvious, just not particularly funny

I read Dune a lifetime ago, and not since. I’ve always thought it one of those subgenres where there’s a complete disconnect with Earth History as we know it. Like Banks’ Culture, but unlike McLeod’s Fraction(ism). One feels that Culture humans would have no idea what you were talking about if you mentioned - for example - Ancient Rome, as it would have passed out of the public domain and into some social prehistory, lost to most, or even everyone. Whereas Ken McLeod’s protags would be all too aware of such history.

So, thanks for that.

Nonsesnse! In the Land of the Free, computers do all the work so we can all be small-business owners in the Ayn Rand sense of the term, creating jobs for one another at a staggering pace. This is why the unemployment rate has been negative for decades, and the income of everybody except the lazy has been skyrocketing. Pity the 99% aren’t working harder.

creating jobs for one another at a staggering pace

Trickle sideways? I never really caught that about Rand before now. Wow. Ta.

One feels that Culture humans would have no idea what you were talking about if you mentioned - for example - Ancient Rome,

Well, that’s because humans aren’t supposed to be part of the Culture (yet). In The State of the Art, Contact came and took a look at earth back in the 1970s, and decided that we weren’t up to scratch yet.

Interesting that he’s the navigator, the kubernetes.

Note that in that cartoon, even KKK lynchings have been automated.

Oh, and I nearly forgot, but a friend of mine a few years back did a whole master’s thesis on cybernetics and the East German government. Like many other things, there was an ongoing to debate on whether or not it was or could be suffieciently marxist to incorporate. It swung with the tides of the party, not surprisingly. When the Soviets had more sway, it tended to be out.

Yeah, my union was up to this nonsense in the 30s: 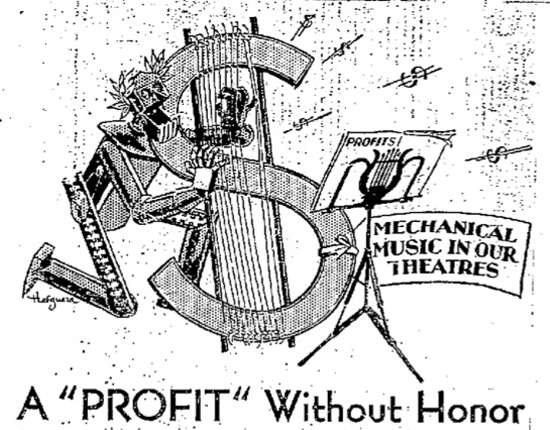 Unfortunately, as ignorant as the ads are the union has not gotten any smarter about this in the last 80 years.

The Dune reference is to an element of the backstory: the Butlerian Jihad.

This is also the reasoning behind the discipline of Mentats. And why people need to secretly go to Ix for forbidden tech.