Fallingwater, an hour out of Pittsburgh, is described as the world’s most beautiful modern house. But fully half of architect Frank Lloyd Wright’s fully-conceived masterpieces never left the drawing board.

Wright designed 532 buildings that were made, and about the same number again that never were. His career spanned seven decades. His personal life was beset by chaos. He left his first wife Kittie, then in 1914 his partner Mamah Cheney was murdered alongside six other people by a domestic worker named Julian Carlton. His second wife, Miriam Noel, was a hopeless morphine addict. His third marriage, to Olgivanna, seems to have been all right. Wright famously said that, “not only do I fully intend to be the greatest architect who has yet lived, but fully intend to be the greatest architect who will ever live.” Walking around this show, a beautiful edifice built of the flotsam and jetsam of a long career, one realizes that even a man like that didn’t always get his way.

My favorite FLW fantasy is The Illinois, a mile-high skyscraper that makes the Burj look like a Burger King.

Perhaps because the site was to be local, I’ve always been partial to the Gordon Strong Automobile Objective. Then, of course there are Wright buildings that have been torn down, like the Larkin Administration Building.

But fully half of architect Frank Lloyd Wright’s fully-conceived masterpieces never left the drawing board.

Honestly, they look fucking great on paper, IMO better than in real life. I revisit my beloved FLW book occasionally (Simon and Garfunkel’s FWL song lilting in the background, of course…) particlarly the drawings that have the horizon-line view of the visible building that then fades down into a floorplan, in perfect perspective to the rest of the drawing.

ETA: There are better ones, but this is the only example I could find quickly online: 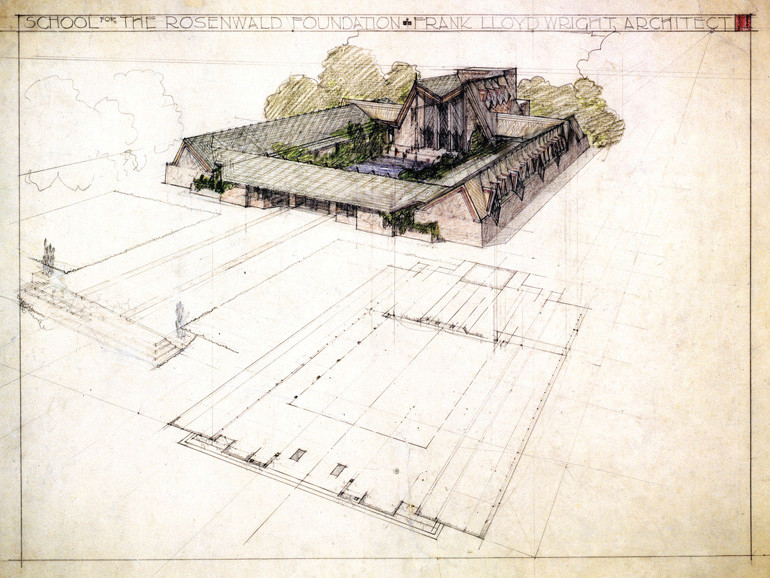 Fallingwater is simply gorgeous - but apparently it was a terrible house to live in. Not only was it not properly reinforced, but it leaked and the sound of the river drowned out conversations until it was double-glazed.

But I’d still have it in a heartbeat.

My favourite bit of Wright? Tough call. Either the Laurent House with that lovely curving wall of glass looking out into the garden:

or the stunning Johnson World Headquarters with all that beautiful brickwork, those amazing pillars and the tubular glass inserts: 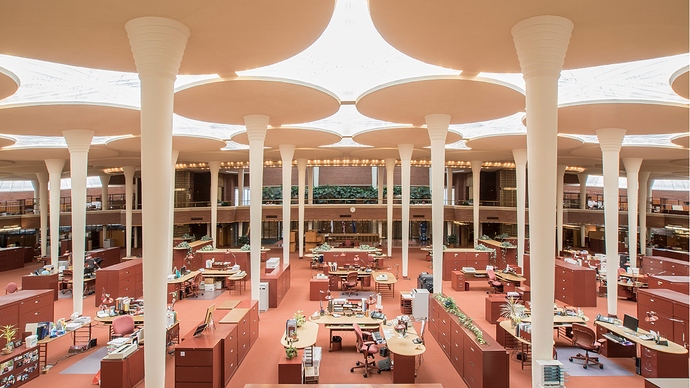 That’s the future we’re meant to have. There should be a flying car parked just outside and a moonbase.

or the stunning Johnson World Headquarters with all that beautiful brickwork, those amazing pillars and the tubular glass inserts:

For some reason, this is the FLW building I want to see the most. It’s fascinating. 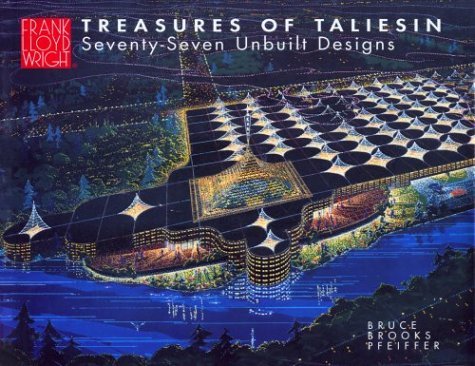 When I did a tour of Taliesin West, I was surprised by the derisive attitude the tour guides had for engineers, and that FLW didn’t need those fuddy duddies messing up his wondrous designs. Maybe engineering was a different realm back then, but it didn’t surprise me that many of his buildings had significant problems with their building envelopes and structural elements the day they were built, let alone once they started to age. The glass tube inserts used for the roof of the Wrigley building couldn’t be sealed, so it leaked like a sieve whenever it rained, but it looked nice while doing it.

In a more general sense, Unbuilt America is a book devoted to this sort of thing. 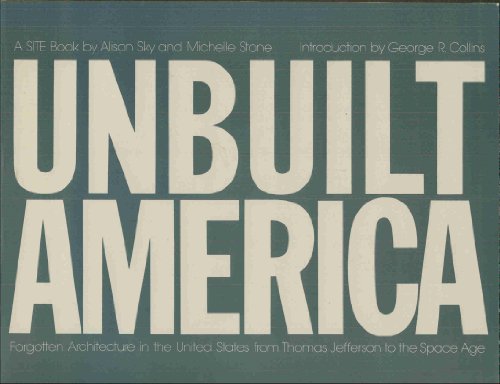 Pictures and describes abandoned architectural projects, explaining why they did not materialize

On the other hand, his plans for “Broadacre City” are of a nightmarish sea-to-shining-sea suburbia the practicalities of which aren’t really thought through. https://nextcity.org/daily/entry/frank-lloyd-wrights-utopian-dystopia

Last weekend, I happened upon the open house to celebrate the lovingly restored Unity Temple in FLW’s home base of Oak Park, Illinois. They were cheerfully transparent about Wright’s failures as a structural engineer. Much of the $25 MILLION dollar restoration had to do with the moisture trapped in the structure by the failed attempt at passive cooling.

The renovation is true to the original, very beautiful colors and finishes, but adds air conditioning and a wheelchair access.

“a mile-high skyscraper that makes the Burj look like a Burger King.”

Anyone with even basic sketching abilities can do that. FLW was an architect, not an engineer which is why places like Fallingwater have so many problems as a functional living space. You had to conform to his ideas, even the furniture and dinnerware were designed by him in some homes and were never ever supposed to be changed or even moved in some cases

Anyone can dream up wonders, even mad poets:

“Pish, what is a million dollars? I have spent more than that in an idle afternoon’s dreaming.” Navarre from Jack Vance’s novel “The Palace of Love”

As an engineer specializing in the Building Envelope there’s a supposed FLW quote that we throw around often. Supposedly he once, disdainfully, offered that if a building doesn’t leak then “the architect didn’t try hard enough.” Of course we weaponize that, while throwing shade on architect’s of today, but it’s hard not to see that the Taliesin West guides understand the philosophy that undergirds the place.

I’ll stick around and see if somebody cares to tell me that he never said any such thing. Google could solve this for me, but the story is just so good…

My favourite bit of Wright? Tough call. Either the Laurent House with that lovely curving wall of glass looking out into the garden:

is that one of the Usonia homes? this 99% Invisible podcast episode about his Usonia ideal is amazing. i’d love to live in a Usonia home neighborhood. 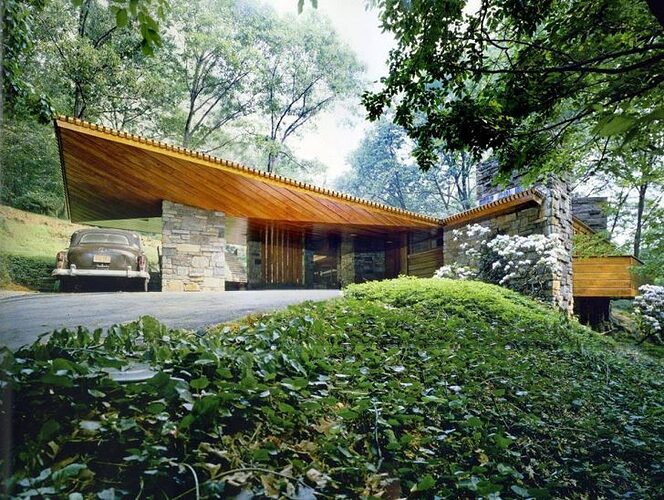 Frank Lloyd Wright was never one to shy away from making grand statements about architecture, like: “The future of architecture is the future of the human race. The two are one. If humanity has a future, it is architecture.” He also saw himself as...

When I lived in Oak Park, there was a walking tour that went past our place. My family knew a couple people that lived in his houses. They all had major problems.

Personally, I think he was just ahead of his time. I’d be willing to bet he could have done amazing things with modern materials and techniques- But what he had to work with just wasn’t up to the task in a lot of cases.

While I’m not specialized in Building Envelopes, my feelings on this subject as an engineer are that there’s no need for conflict between architects and engineers, as I believe there’s an engineering solution for every aesthetic choice. But this assumes everyone can keep their ego out of a project, and not take everything personally, and that’s just crazy.

FLW was a character, grandiose and flamboyant … and prolific. No better way to have a living legacy than to design and build. I’m not one for cheating and some of the relationship stunts he pulled… but those are also notes to his song.

Unity was closed last year when I made the trek to take the Oak Park tour , bummed, but what a lovely area to walk around. Thrilling to see in person the houses I’ve only read about and watched on TV.

Can’t say everything he did tickled my soul, but I am taking inspiration from the windows in his home/studio to have some lead design aspects for the windows in my new house. Enjoyed the shadows those created.

But for sheer wonderment, the chains and ties he used in his studio , even to this day, amazing.

Once you guys sort out your Presidential issues, I’ll cross the border again and road trip to Falling Water, few other places he left his mark.

I don’t see eye to eye with FLW on some of the issues, but I do hope I’ll be as sharp at 90 years as he was.

When I did a tour of Taliesin West, I was surprised by the derisive attitude the tour guides had for engineers, and that FLW didn’t need those fuddy duddies messing up his wondrous designs.

Tour guides are… well, I’ll just leave it at that.

Per a F. L. Wright documentary, that gorgeous ceiling in the Johnson building leaked a lot, and the Falling Waters house had (and may still have last I read) serious innate structural problems. Function did not follow form (as was not atypical for Wright structures) and his interiors in some cases were ‘take it or leave it’, i.e., they were meant to look great, but not allow you to keep all the stuff you already have. (The doco also went into how FLW early on claimed greater credit for work he had been involved in.)

By happy accident I had a client in the town where FLW’s only skyscraper was built, out in the middle of nowhere, Oklahoma. It’s a hotel now, but alas my accommodations were elsewhere. Nice bar on one of the upper floors, though.

The Price Tower is a nineteen-story, 221-foot-high tower at 510 South Dewey Avenue in Bartlesville, Oklahoma. It was built in 1956 to a design by Frank Lloyd Wright. It is the only realized skyscraper by Wright, and is one of only two vertically oriented Wright structures extant (the other is the S.C. Johnson Wax Research Tower in Racine, Wisconsin). The Price Tower was commissioned by Harold C. Price of the H. C. Price Company, a local oil pipeline and chemical firm. It opened to the public in F...

My favorite is the second Jacobs house, the “Solar Hemicycle”.

Personally, I think he was just ahead of his time. I’d be willing to bet he could have done amazing things with modern materials and techniques- But what he had to work with just wasn’t up to the task in a lot of cases.

This appears to be true. The restoration of Fallingwater is a great illustration - with coated rebar and triple-glazing, the building lives up to its mythos easily. It took almost a hundred years to realize the problems with Sullivan’s concrete & steel innovation, because it takes a long time for uncoated rebar to burst concrete as it did at Fallingwater.

I think the biggest problems FLW faced - in order! - were his own egotism and ability to rationalize away unethical behaviors, the newness of the materials and techniques he needed to use to realize his visions, and the inability of workmen and inspectors to understand and work to his designs. He truly was a visionary, that’s for sure.

My favorite FLW fantasy is The Illinois

IIRC this was a joke entry for a competition for designs for what became the Tribune Tower. Many other famous architects submitted joke entries as well.