The Freewrite, a beautiful, rugged machine for writing -- and nothing else

BBS doesn’t have a headline for this.

So it’s an updated version of the Tandy 100? I’ve still got one of those someplace, haven’t used it in years.

When I was a kid in the early 1980s I would go visit my dad at the newspaper where he was an editor. The AP reporters would come in to borrow a desk to write and then plug the Model 100 into a phone line to transmit their stories.

It was beautiful at the time. But I have a hard time picturing a market for this new machine.

Not to be a buzz kill but FocusWriter is an awesome writing tool. It’s under the GPL too.

I use WriteMonkey myself. They help, but they certainly don’t address the problem in that they can easily be alt-tabbed in response to a message ding or into thinking “I’ll just play a quick song” or “I wonder what the score is”. It’s a distraction inhibitor, but a dedicated machine is a distraction preventer.

The Freewrite still seems like a pretty dumb way to do that, but it has the convenience of also being portable, rugged, and having a long batter life.

The Freewrite is basically the machine I’d want to bring along when I head up to my cabin for a month in the summer.

That wouldn’t be nearly as reliable with it’s likely dependence on being plugged in. Old laptops don’t tend to have good battery life. To be honest the month-long battery life on the Freewrite is the single most appealing (to me) thing about it.

No, it’s more of a hipster Alphasmart at 20 times the price.

Alphasmart has a loyal fan club, and here’s why: 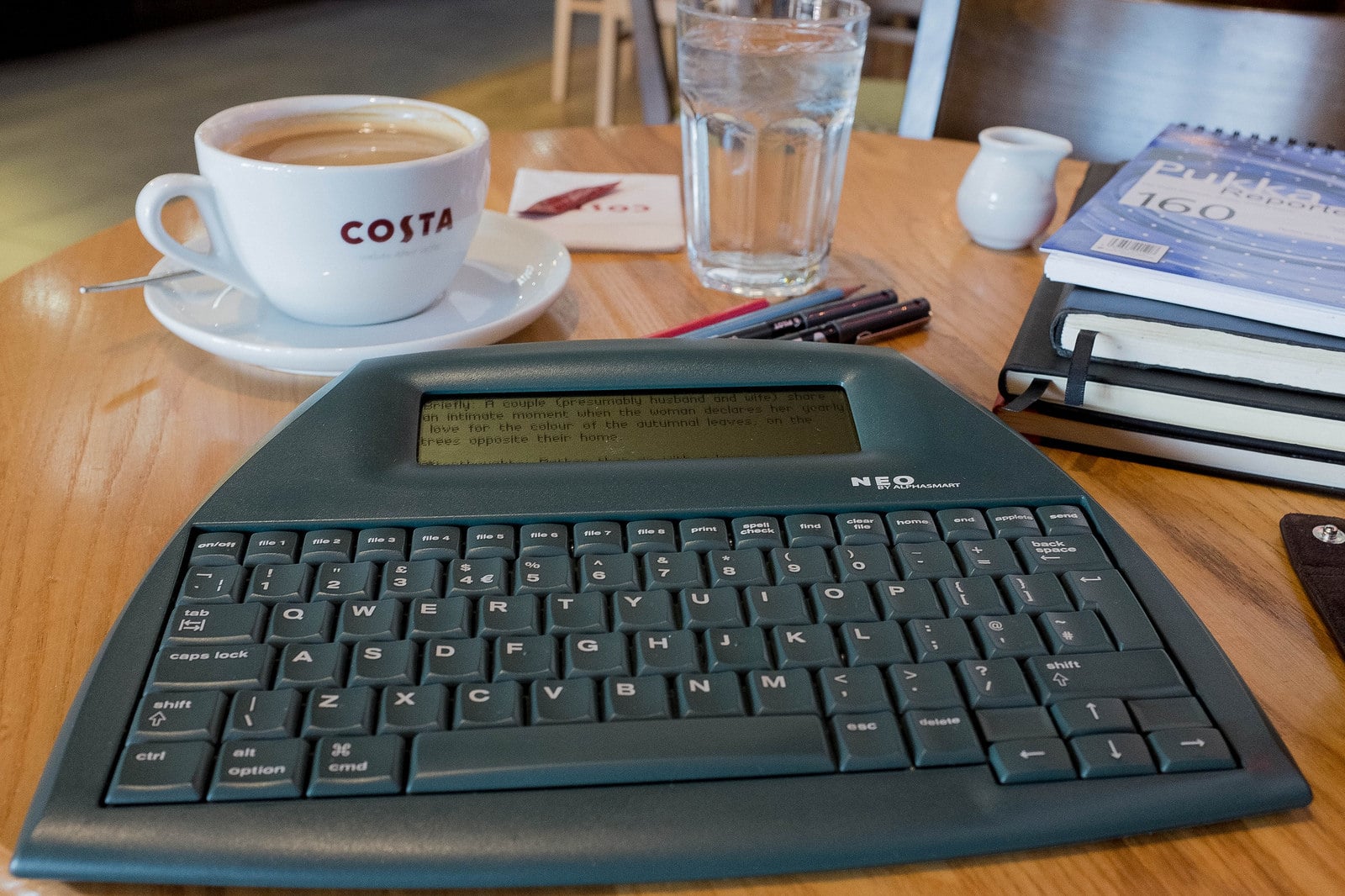 In Praise of the Alphasmart Neo | The Digital Reader

If you’re not familiar with the Alphasmart Neo, then check out this great overview from David Kadavy, or this historical review on Hack Education. It’s a keyboard with a screen, and nothing else – a portable word processor that saves text files and...

Ironically, I’ve been (slowly) working on a project to mill out a keyboard case and mount a cherry switch mechanical keyboard (using a PCB and switches) inside of it, a Pi Zero, and a small TFT screen to do this very sort of thing.

Not yet. They’ve just started shipping. Mine will be arriving, I’m assured, sometime in the next month.

To be honest the month-long battery life on the Freewrite is the single most appealing (to me) thing about it.

That is a big plus. I miss having a black & white LCD phone that needed recharging every week or two. And I bought the cheapest Nook for exactly that reason.

I’ve got several Alphasmart Neos, and I like them a lot. But they have some limitations. The screen is not set at a very user-friendly angle, and when I use it to type, the bezel tends to obscure the bottom line. (I’ve created a custom font that helps with the problem, but still.) There’s no built-in screen light, and the case is curved in a way that makes attaching a separate light problematic. I don’t love the limited file size, either–having to switch back and forth between different files is kind of a pain, and for me the size limit is always lurking there like a psychological block. (Or maybe I’m just making excuses.) Getting files off the machine is fiddly and requires a USB-A to USB-B cable, which means I don’t do it as often as I should. And I’ve read just enough stories about people losing all their work when the Neo goes to data heaven that I’m a little trepidatious about my failure to offload files regularly.

I also backed the Freewrite Kickstarter, and it solves some of those problems while introducing others. Biggest problem (and I expect a dealbreaker for most, at least until somebody implements vim) is the lack of cursor navigation keys. It remains to be seen whether I can realistically write on a device that only lets you make changes at the end of a file. The weight is a second downside–the Alphasmart weighs next to nothing. The one-month battery life is very good, but nothing will ever touch the Alphasmart’s hundreds of hours on three AA batteries.

It seems like there would be a market for something more like an updated Neo–bigger file storage, a slightly redesigned screen, wifi file transfer, and a case that either provides a built-in light or allows an external light to be more easily attached. I’m not sure how much of that could be achieved without making a huge dent in the battery life. The Dana, again, solves some but not all of these problems, and it really cuts down on the battery life.

FocusWriter have the very big problem of not being able to change the font size.

It’s too damn small and I don’t want to be all the time squinting at the monitor. It hurts.

I can see that being a feature. There are apps that behave similarly so that you just write without dickering with what you’ve written.

They’re certainly selling it as a feature, and I can understand why it would be one. I’m just not sure it’ll work for me.