Out of interest, when was that? Hasn’t it always been the case?

Not exactly. Started shifting a long time ago, but really picked up steam in the 1970’s. 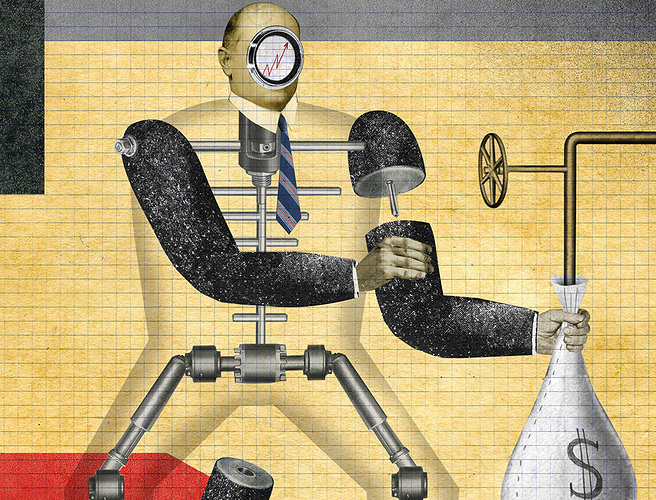 How health insurance changed from protecting patients to seeking profit

Health insurance began as a method of protecting patients and keeping hospitals afloat. Then it became a for-profit industry. An excerpt from An American Sickness.

Don’t get me wrong, docs sought to make a living in medicine from the get go, but the astronomical profits seen these days (not enjoyed by the providers, I hasten to add) are a whole other kettle of fish. It happened recently enough that one of the founding partners of my practice was still here when I started, and used to bemoan how we had shot ourselves in the foot by accepting insurance back when it was new. We traded a somewhat better income for total loss of control, to where now, in private practice, we had no control over what we were paid for our services, and no control over our expenses. If you haven’t noticed, private practices are fading rapidly.

The US seems, historically to be a society where there is almost no concept of a public good.

Ah, right. And we all know what (who) happened once the 70s ended.

Much of the US sure has a real blindspot for the 90% top marginal tax rate that funded the opportunities boomers grew up with. They somehow think that it was all the segregation of the 40s and 50s and not the massive public investment that built what they enjoy.

yeah, white people became very concerned that their tax money might get spent on people of color.

Or just how absolutely robust the public sector was during the liberal consensus and how popular it was.

They somehow think that it was all the segregation of the 40s and 50s and not the massive public investment that built what they enjoy.

But we do have to remember that part of the reason why public programs were popular among some whites (especially in the south, but not just) was that it was restricted to them (well, white men). That was part of how the pro-business wing of the GOP was able to come to dominate that party - they leaned into the argument that the entitlements were now going to “undeserving people” newly freed from segregation, and that wasn’t fair, because “those people” didn’t work as hard as white men. Then the racist, religious right got into it by pushing against LGBQT+ rights and women’s rights.

But there is a reason why FDR is still revered as one of our best presidents - because he in fact put public programs first in his policies. So did Johnson (who fucked that up with his policies in Vietnam, the jackass).

yeah, white people became very concerned that their tax money might get spent on people of color.

I’d argue that many people wouldn’t have been as concerned until the southern strategy made them more concerned.

TLDR, the culture wars are going to kill us all.

And this was actually a non-profit hospital!

Question, does the losing party pay the legal fees of the winning party? This is the case is other English-speaking civil case systems. I am just wondering who has the time and money to pursue this for 10 years, even if they are on the hook for a huge amount.

Being non-profit doesn’t magically insulate a hospital from the operating costs it needs to pay. It just means it’s goal isn’t making a profit.

The US seems, historically to be a society where there is almost no concept of a public good.

My interpretation of this is that while the concept of “public good” does exist in America (it certainly has existed in the past and seems to only surface at times of national crisis), the idea of “personal freedom” always supersedes it.

Along the way of our measly 200+ year history, Americans have confused “freedom” to mean what’s best for me as an individual is more important than what’s best for society as a whole. It’s a distortion of our Constitution and “rights” that is only getting worse.

For anyone interested, Cory covered the issue with drug coverage I mentioned above, which is at least topic-adjacent to the OP:

the idea of “personal freedom” always supersedes it.

Except for the counter example I noted above… The actual HISTORY here is not so simple. There have always been competing visions of America.

It’s likely a combination of the two…

I’m not sure why this is supposed to be “better”, or even why Americans would accept all of that shit in the first place. Because I can tell you from my own experience, it is very much not better.

‘Cause anything other than what they’ve got is the province of the Extreme-Left, Librul Commie bastards.
As such, I’m extremely glad I live in a country run by Extreme-Left (ha!) Commie bastards. After hitting my knee hard coming off my bike riding into town, the increasing amount of discomfort had me going to the doctor, who sent me for an X-ray, which showed osteoarthritis, and I was put on prescription painkillers and anti-inflammatory drugs. More recently, I’ve been diagnosed with carpal-tunnel issues as a result of arthritis caused by repetitive work loading industrial folding machines with heavy loads of paper. Fortunately, a wrist brace and an additional dose of a strong anti-inflammatory in the evening is keeping it under control.
Because of my age, all of that is free. Doctors appointments, and hospital admission is all free, but there is a prescription charge up to age 60.
I can almost hear the sort of comments that Republicans would say about that.
Fuck ‘em.

Question, does the losing party pay the legal fees of the winning party?

It depends. “Loser pays” can be a contract term, or enforced by certain statutes. Lawyers in these cases may work the case without charging the client unless they win. (Naturally they will get a cut of any settlement plus any accrued fees — it’s all a gamble.)

I’m not sure why this is supposed to be “better”, or even why Americans would accept all of that shit in the first place.

So much of what is wrong with the United States comes down to roughly half the population being gullible and irrational, and roughly half the politicians being A-OK with using that to their advantage. As others have pointed out it’s also due to lobbying, corporate media, and other late-stage-capitalism diseases. A hearty stew of bullshit.

Remember “Obama’s Death Panels”? Well, where are they? Ask a Trumper and they’ll probably insist “Obamacare was repealed.” 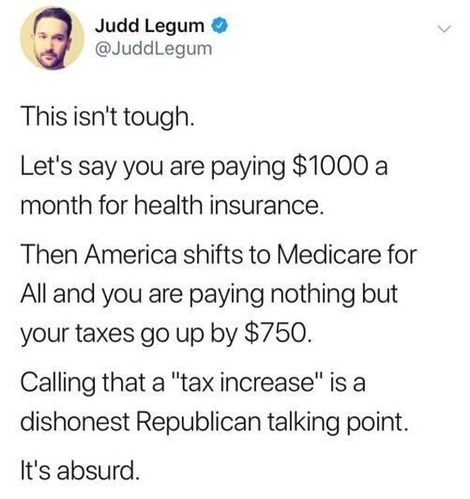 That one nailed me when I was living in the States. An In network provider sent my sample to an out of network Pathologist.

The bill was shocking to my Canadian Pathologist collegues (roughly 20x what they bill for the same examination).

And that wasnt even a particularly big bill. I know other people (on Visas) who just left the States because they couldn’t pay their bill (while insured and working at the same hospital…) in their lifetime, and just never coming back to the States was their only option.

Provider compensation has always been part of medicine, but things really went to shit with the rise of for-profits hospitals in the 1960’s through now. Particularly since the 90’s.

Yeah, as difficult as it is to imagine now, it used to be true that the vast majority of hospitals were non-profit institutions. And yet the patients still got treated and the doctors still got paid.

I want a solid plan of how you are going to deal with the +1 trillion dollar industry that is medical insurance.

Insurance… all Insurance… is basically the result of an unholy mating of Gambling & a Ponzi Scheme.
Insurance Companies bet that nothing bad will happen to you [and they fight like hell to avoid paying, anyway]… and they don’t have nearly enough to pay everyone off all at once; just a chosen few.
So, everyone pays, only a few benefit [besides the Ponzi Schemers, of course].

RICO the bastards, is how I’d do it.
That oughtta collapse the Kleptocracy that is the USA.