The world's most popular smartphones are underpowered, unusable hot messes

Assuming there’s an SD card to move them to.

I also have a Moto E 2, with a slot. There are two different ways to configure the SD card, and neither allow shifting Google’s apps, which keep getting bigger.

Those slots seem to be vanishing from new phones along with headphone jacks.

Those phones are vanishing from my future upgrade path.

Come to think of it, I’ve seen several stories about some genius who’s developing the $5 superphone for the Kalahari bushmen, but I’ve never seen a follow-up where the phones are actually working and improving peoples’ lives.

Where is the Trevor Baylis of smartphone app development? 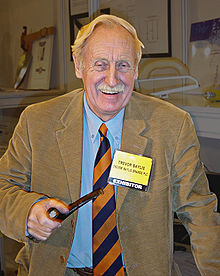 Trevor Graham Baylis CBE (13 May 1937 – 5 March 2018) was an English inventor best known for the wind-up radio. The radio, instead of relying on batteries or external electrical source, is powered by the user winding a crank. This stores energy in a spring which then drives an electrical generator. Baylis invented it in response to the need to communicate information about AIDS to the people of Africa. He ran a company in his name dedicated to helping inventors to develop and protect their i Tr...

I think you’re absolutely correct. Unfortunately, the idea of regional winners (as opposed to global winners) has pretty much died, except in China. Instead the developing world seems likely to be perpetually stuck with software (including Android) that will never be designed from the ground up to with their constraints in mind.

As I wrote earlier, there are different, simpler smartphones in the third world and their OS is not Android and uses limited ressources. The phones and OS are designed in China, I think. and yes: Facebook and Whatsapp support these phones with custom designed software which is presumably less wasteful of ressources. Facebook and Whatsapp don’t publish much about this part of their business, but I have seen the phones.

Search on alibaba for manufacturers like Kaliho, Xinyi, Zhike, etc…

The history of “desktop” computers does not offer much hope for a quick fix, as Microsoft’s products earned a reputation for bloatware back then for the exact same problem: developers only developed for the latest and greatest, expected the hardware to catch up, and never bothered to streamline their code. Part of how Apple managed to keep making Mac OS X snappier with every release even on older hardware was because they paid attention to optimising their code, and kept finding things they could trim or make more efficient.

Most mobile developers will not want to develop for underpowered devices, because that’s neither sexy nor where large profits can be made.

I think it’s specifically that the developing world doesn’t offer easy profits. After all, you could make a lot of money building a phone for $5 and selling it for $6, if you sold a billion of them. But you’d have to invest a ton of money up front, and it’s much safer to target 10 million rich customers and make $100 per phone.

You always see village-scale manufacturing in the developing world, where someone’s made a dress out of Coke freebie T-shirts, or an irrigation system from “disposable” water bottles, or a truck out of old scooters, or a house out of shipping palettes. That’s why I mentioned disposable technology before; when rich countries invest in making something “disposable”, that tends to line up with what the developing world regards as “affordable”. If Samsung started making a disposable smartphone for festivals, the bill of materials for that could be the starting point for a true grassroots global-southphone. Mmmmmaaaybe.

Which is frustrating. 15 years ago, a desktop PC with 4 CPU cores and 1 GB of RAM was a studly, fast machine.

It still is, if you’re running native complied code. Compiling to bytecode sounds fine, but either you run it in a virtual machine (slow), JIT compile (initial speed hit, and limited optimization), or compile to native on installation (storage hit to save the compiled version, and again I wonder about the optimization). On Android 5+, the switch from Dalvik to ART did not do limited storage phones any favors.

Granted, on a multi-hardware situation like Android, native code has its own nightmares, but at least it’s fast.

On the Raspberry Pi, Python is lovely for effortless pulling in libraries, but for speed, native code like Free Pascal slices and dices it.

Android 7.0 Nougat introduced JIT compiler with code profiling to ART, which lets it constantly improve the performance of Android apps as they run. The JIT compiler complements ART’s current Ahead of Time compiler and helps improve runtime performance.[9]

Sounds like compile on install wasn’t working as well as they hoped. Rube Goldberg approves! (“lets it constantly improve the performance of Android apps as they run”, total cybercrud bullshytt.)

I’m reminded of Ianto Evans & the Aprovecho commune.
He/they built what was possibly the first cob house in the US, cultivated freeze-tolerant fava beans, & invented a portable dung-burning stove for use in Africa & India.

And probably only if it were created by actual developing-world folks, rather than someone in Mountain View trying to imagine what using a phone in Bangladesh is like.

Wait! Silicon Valley techbro gets relocated to Bangledesh to develop a downmarket phone, but instead ends up developing…himself. I feel an 80s fush-out-of-water [racist] self-discovery rom-com coming on!

These are the most important points, which most people outside of those 3rd world countries miss.

Plus all the Google apps keep getting larger, and there’s no option to remove them to the SD card.

Search on alibaba for manufacturers like Kaliho, Xinyi, Zhike, etc…

And as you also posted earlier the privacy is zilch. Sigh…

But the reality doesn’t really live up to the hype, as Pranav Dixit discovered when he bought a $60 Bharat 2 phone – the bestselling phone in India – and installed Facebook Lite, Ola Lite, Uber Lite, Twitter Lite, YouTube Go and Google’s Files Go, an app designed to clean up temp files and optimize storeage.

I bought an affordable shovel, and then I put 22 inch mag wheels, a coffee maker, a retractable beach umbrella, and one of those car horns that goes ‘a-ghoo-gha’ on it - and now it barely digs holes at all!

As I wrote earlier, there are different, simpler smartphones in the third world and their OS is not Android and uses limited ressources.

Indeed, but what I’ve observed is that status matters, and that high-status technology that is ill-suited for a market often triumphs over a cheaper, more effective, but lower status rivals.

It’s not that rivals don’t exists - it’s that there’s a long tradition of such rivals falling to the low-cost, ill-fitting variant of high status tech.

As I wrote earlier, there are different, simpler smartphones in the third world and their OS is not Android and uses limited ressources.

Indeed, but what I’ve observed is that status matters, and that high-status technology that is ill-suited for a market often triumphs over a cheaper, more effective, but lower status rivals.

It’s not that rivals don’t exists - it’s that there’s a long tradition of such rivals falling to the low-cost, ill-fitting variant of high status tech.

That is indeed true.

The true meaning of “AI,” currently.

The way I see it is - software developers simply do not give a fuck about slimming their programs down once memory and power became increasingly available. The old days where programs had to fit on a floppy, or <1mb of RAM to run your program are gone. Those days lead to some really ingenious work arounds. Even something like the classic Super Mario Bros had to have short cuts to make it all work on the cartridge.

It’s not that they care it’s that it is very expensive to care. Normally, you develop for platforms like Android (or iOS for that matter) by leaning on this tower of various technologies, frameworks, and the like. Loading all of this, no matter how ‘lite’ you make the app, is going to be slow going. And sure, you can load up the native toolkit and all that jazz and write a hand-tuned app but then you need a developer for whom memory management and pointers aren’t a closed book buried at sea and (a) surprisingly few of those (b) those that exist command a bigger price. It also takes longer and development of such is less amenable to management pivoting mid-development or to outsourcing random bits of it to teams in outer Mongolia.

Psychotically tuned, optimized-to-a-T code still exists but it is either in games (and not most of them either) or aboard spaceborne scientific instruments. Oh, and the demoscene. Can’t forget the demoscene.