I wonder what they trained it on. You probably can’t mechanical turk a training set that requires such a high level of reading comprehension and writing ability. First I thought they might have used Simple English Wikipedia, but of course that’s not a 1:1 translation of individual sentences on normal English Wikipedia.

While the samples look pretty good, the material that I fed into the extension was pretty far off from the actual meaning. I’d say it needs some work.

‘Jargon’ is my favourite bit of etymology; it is a medieaval French word for the twittering of birds. It is a small step from birds sounding pretty, but actually telling their neighbours to keep off their territory, to technical terms in scientific papers to do just the same.

This would need some training, but I imagine we could have a GAN, with one network generating jargon gobbledygook, and another decrypting it.

While the samples look pretty good, the material that I fed into the extension was pretty far off from the actual meaning.

I’m not surprised. The examples given are actually pretty straightforward. They use unnecessarily complicated terms and some obtuse sentence structure, but are otherwise clear. It looks like this is just finding simpler words and reordering sentences. I’d be very surprised if it’s capable of anything that might require some level of understanding of the meaning in order to clean things up.

Of course, lots of people write this way, so it still might be useful, though I’d personally be worried about it accidentally changing the meaning, which I wouldn’t realize if I wasn’t capable of parsing the original text in obfuscated form. 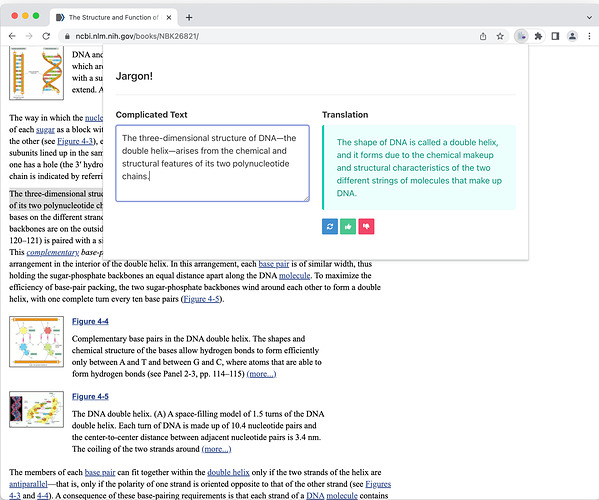 I’m not sure that this is clearer. They could be describing a molecule made up of a strand of lipids intertwined with a strand of amino acids.