Under Trumpcare, surviving a gunshot wounds gives you a "pre-existing condition"

Everyone knows what needs to be done but our politicians are paid to keep it from happening. The elimination of insurance from the healthcare system is long overdue. Universal single payer healthcare is the only valid solution to this nations healthcare crisis.

Under Trumpcare, surviving a gunshot wounds gives you a "pre-existing condition"

Lower-income survivors, which are the majority of victims, benefited from expanded state Medicaid coverage in recent years. Some of them could lose their health-care coverage altogether.

I’m so glad they replaced those horrible death panels with the invisible hand of death!

I had crap insurance during my first job out of college. Unicare was the company. They tried to tell me a cut on my hand needing 6 stitches was a pre-existing condition. Amazing. Getting them to pay out on anything was a fight.

Much like corporate bankruptcy & restructurings - surely people will be allowed to declare themselves new entities?

surely people will be allowed to declare themselves new entities?

Since House Whip Scalise was mentioned in passing . . . 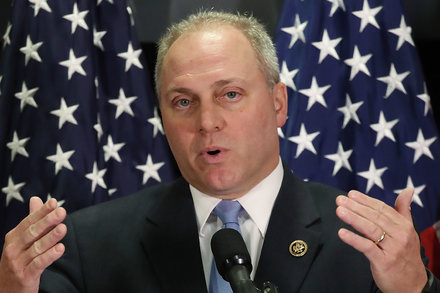 Steve Scalise Has Surgery to Control Infection After Shooting

Mr. Scalise, who was critically injured in a June 14 shooting during a congressional baseball practice, was moved back to the I.C.U. over concerns about infection.

The infection mentioned may be MRSA (antibiotic resistant.) This is what killed my mother in 2012. Scalise may soon be former House Whip.

The July 4th holiday is usually an easy win for a politician: go home and march in the local parade, show patriotism, connect with the voters in a festive atmosphere that focuses on national unity. This year, a lot of GOP Congresspeople decided to give it a miss for the first time.

Which is to say, they know that this may be the issue that turns a lot of their supporters against them. Screwing voters over with big and abstract things like the economy or the environment is one thing, but when access to healthcare for them and their families is pulled away even conservative voters start taking it personally.

I’m going to guess that belonging to a police union creates an indemnity to this condition.

How the last four presidents spent their first 4th of July in office.

Nosocomial MRSA infections are getting all too common. Our hospital system has been covering up this for a while now. Sorry to hear about your mother.

[quote=“anotherone, post:13, topic:104164”]
Nosocomial MRSA infections are getting all too common.
[/quote]I had an aunt who died from Legionnaires disease that she picked up during a hospital stay for a different malady. Unfortunately, hospitals are filled with sick people, and preventing communicable diseases is easier said than done, especially as overuse of antibiotics helps to spread variations which are resistant to treatment.

And furthermore, we need a return to traditional American healthcare practices.

Wouldn’t that also apply to vets who were shot?

Wouldn’t that also apply to vets who were shot?

Thankfully cats don’t have opposable thumbs, so this isn’t a big problem.

I’m not sure how we’re supposed to “show respect for the office” when the office-holder himself holds it in such obvious contempt.

So repugnant plutocrats in roles way above their capabilities won’t be eligible for Trumpcare if they’ve repeatedly shot themselves in the foot?
Silver linings people, silver linings.