it was supposed to be a cautionary tale, never an instruction manual

Human nature, human frailties, human stupidity, human fears, human hypocrisy, and human aggressiveness are consistent and seem unchanging. I’m with George Carlin–the planet will be fine, it’s the people that are the problem.

I’m here for my 2-minutes hate. Where are today’s posts about Elon Musk and Kyle Rittenhouse?

Once the clocks strike thirteen it’s game over.

While Orwell’s ideas about Big Brother, Minitrue, Minilove etc. certainly stuck with me, I always thought the biggest takeaway from 1984 was the treatment of what later became known as the Third World (“Between the frontiers of the super-states, and not permanently in the possession of any of them, there lies a rough quadrilateral with its corners at Tangier, Brazzaville, Darwin, and Hong Kong”), and in a close second, the super-states’ military buildup (“A Floating Fortress, for example, has lo…

I’ve liked 1984 less and less as I’ve got older. Compared to the mad brokenness of We and Brave New World, “A boot stamping on a human face forever” just seems cliched and a bit unbelievable. It fails the ‘nobody is the villain of their own story’ test.

It’s been increasingly perplexing me that sites that aren’t Twitter and thus don’t actually have to carry the inane tweets of vaguely famous people will throw this advantage away and mistake “Hey, did you know someone you mostly don’t care about and somewhat dislike said something stupid?” for a newsworthy story.

the biggest takeaway from 1984 was

The way Orwell’s empires are deliberately wasteful, destroying resources on purpose, reminds me of Bitcoin and the rest of the crypto industry

“He’s not hurting the people he needs to be hurting” was a real quote about Trump.

“A boot stamping on a human face forever” just seems cliched and a bit unbelievable.

Upon first reading, I agreed with you, but much later I realized the conflict of that thought was explored from within the pages of the book itself. There is a vibrant and largely unconcerned society living just outside of the ministry walls that much more closely mirrors real life. The “boot” that Winston is concerned with is the one that he himself wears and tightens the laces of every day. As the fist of authoritarianism tightens, more and more people are forced out of its grasp, just like Winston. I think Orwell was much more aware of this than I originally gave him credit for.

However, I always thought that Fahrenheit 451 was a much more apt depiction of future dystopia. The government doesn’t have to force its will on the people; they will gladly choose the convenience of being entertained to death over liberty.

Also: one of my favorite lines in all of literature:

“Winston woke up with the word ‘Shakespeare’ on his lips."

Brought a tear to my eye when I first read it. Winston hasn’t got a clue who Shakespeare was, but somehow the cultural knowledge buried deep within the collective unconscious knew it was something of great value.

Edited for clarity and spelling.

‘nobody is the villain of their own story’

Our current mess and the loony band of brothers under Trump seems more like a version of Mussolini as performed by Benny Hill than the Stalinesque nightmare of 1984 but the harm is just as real and sooner or later, someone smart instead of stupid but clever will emerge.

We already appear to be the second major power to literally vote its freedoms out of existence to please fanatics and the power hungry.

“Hey, did you know someone you mostly don’t care about and somewhat dislike said something stupid?”

Because most people enjoy seeing their philosophical antagonists ridiculed and mocked.

As you have mentioned it, there are Public Domain versions of We on Project Gutenberg and Standard Ebooks. 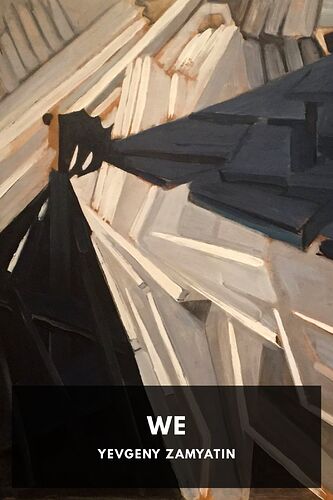 Free epub ebook download of the Standard Ebooks edition of We: A thousand years in the future, the builder of a spaceship discovers his emotions. 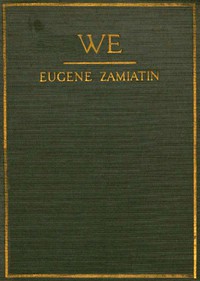 We by Evgenii Ivanovich Zamiatin

Free kindle book and epub digitized and proofread by volunteers.

“A boot stamping on a human face forever” just seems cliched and a bit unbelievable.

The government doesn’t have to force its will on the people; they will gladly choose the convenience of being entertained to death over liberty.

Just like “Brave New World”. People are controlled not by fear, but they comply because they got what they want (or at least what they’ve been conditioned to want). 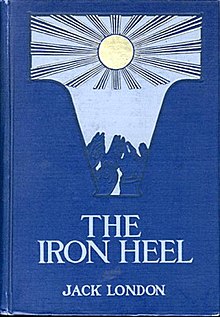 The Iron Heel is a political novel in the form of science fiction by American writer Jack London, first published in 1908. The main premise of the book is the rise of a socialist mass movement in the US – strong enough to have a real chance of winning national elections, getting to power, and implementing a radical socialist regime. Conservatives feel alarmed and threatened by this prospect, to the point of seizing power and establishing a brutal dictatorship in order to avert it. In fact, such ...