Video that explains how to become a dictator

It’s easier than you think.

Give him an inch and he thinks he’s a ruler. 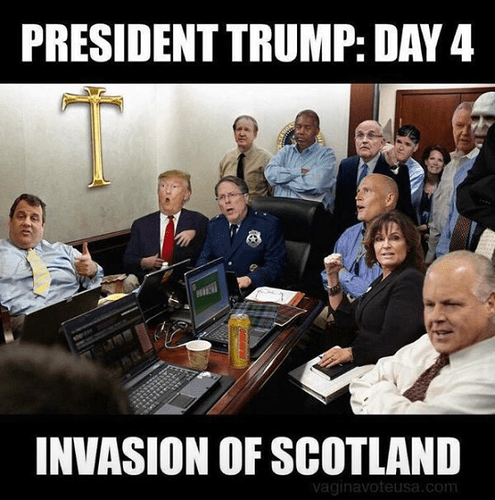 That was pretty awesome. It handily explains why many of us see very little difference between the parties, far more succinctly than I can.

The one thing they left out are villains. In order for the ruler to suspend disbelief in a political system, they have to have someone to blame problems on. In terms of the models given, for the Keys to avoid having to crush the starving peasants, they need someone to point to so the peasants direct their ire elsewhere.

The Great Satan, Israel, Islam, the Commies, the 1%, other races, Jyna, big yooj orange cheetos, nasty women… the list goes on and on. They want you hating all day long, and hating exactly who they tell you to hate.

Oh my god I want to be a dictator! It looks like so much fun!

The money! The power! The psychosis and self-loathing!

Wow, you know, it really says something that the only person in that room I find to be in any way likeable is Voldemort. This would have been a good election for the Death Eaters to run a third party candidate.

If you want to know how to act within power structures, I highly recommend Rules for Radicals. It’s less ideological than people assume. It’s not perfect, so supplement it with other reading, naturally.

So it sounds like the key to success is cut taxes on the rich, slash spending on the public welfare, and be very generous to lobbyists. Did I miss the point?

This would have been a good election for the Death Eaters to run a third party candidate.

He’s on The Big Poll. 4th ballot sheet, sandwiched between Umbridge and A Nasty Woman.

Did my duty and voted, and as always none of my picks have a chance

Never give up! Giant Meteor/Voldemort 2020!

and as always none of my picks have a chance

Isn’t there some Italian book about this? Or is that book limited to only helping princes?

The trick for most people is to balance not having rulers (or followers!) take notice of you with living what you consider a comfortable and carefree life. In a modern Western democracy having a lot of money (but not too much money) makes that a lot easier. Seeking power and fame is basically looking for trouble, but cash liquidity (esp. in combination with the right set of skin or class privilege) can obscure or at least offset the gaze of rulers.

Money or not, though, the system will inevitably come for you at certain points in life despite your best efforts. It’s a variation on the paraphrase of Trotsky that while you may not be interested in the war, the war is interested in you. At those points, it’s best to know in advance how to play the game.

the list goes on and on. They want you hating all day long, and hating exactly who they tell you to hate.

Fortunately for politicians, the Emmanuel Goldsteins usually eagerly present themselves as targets. They only have to be invented when totalitarianism is near-triumphant as in Orwell’s novel.

By process of elimination, this video brilliantly exposes power hierarchies themselves as the root problem.

But then the conclusion is really frustrating, basically saying “Anyway, it’s impossible to do anything without a power hierarchy, they’re all over the place. So you’ve no choice but to accept them.”

There is another way. Neither master nor slave - everyone their own “key to power”. Anarchists revolt not to seize authority but to destroy authority itself. Like Frodo and the ring, you know?

Anarchists revolt not to seize authority but to destroy authority itself.

Unfortunately real anarchists are like the mythical king who abdicated his throne and became a farmer as he could see he was not needed. In the real world most people are “followers”, they will actively seek out or create a power structure if none is already present. Unfortunately the simpler power structures tend to be pretty brutal.

When I heard the part that says “democracies lower their taxes while dictatorships keep then high” I was like wait! what?

As far as I know the countries that have higher income taxes have better social services, education and so on have more happy citizens and more loyal to the system, as a fine example: the Scandinavian countries or Germany.

Yeah… hrm. Well, see, while taxes can be spent on social programs, taxes can be spent on things other than social programs. The video addresses this, and the pragmatic reasons why governments do and do not. For instance, your “Keys” will unseat you if you throw away money on the poor, etc., and all that money laying around in their pockets is a resource your “Keys” see you not exploiting.

He talks about social programs in Democracies, too.

In the real world most people are “followers”, they will actively seek out or create a power structure if none is already present.

It’s easy to believe that people are the way they are because it’s their natural state, but that is a logical fallacy1. One could just as credibly argue that most people are “slackers”, who prioritize the modest needs of themselves and the people immediately around them, and have no interest in leading or following anyone. There are plenty of anthropological examples of societies which de-emphasized or deliberately avoided power hierarchies. Instead it’s systemic conditions like scarcity, technology, and pre-established hierarchies which cause all these slackers to feel that they need to lead or follow.

As these conditions change, so do people’s philosophy about power. And they’re changing quite a lot lately. Instead of asking “how can we get a different leader?”, more and more of us are starting to ask “why do we need leaders anymore?”

1 Nikolas Kompridis: [T]here is a domain of human freedom not dictated by our biological nature, but [this] is somewhat unnerving because it leaves uncomfortably open what kind of beings human beings could become… Put another way: What are we prepared to permit our nature to be? And on what basis should we give our permission?