Watch: Parrot has incredible singing voice while jamming with his human

Originally published at: Watch: Parrot has incredible singing voice while jamming with his human | Boing Boing

Oh, pleasepleaseplease let this not be another fake. That was solid! Can the bird do Clare Torrey’s ‘Great Gig in the Sky’ solo from ‘Dark Side’ ?

From one Parrothead to another: 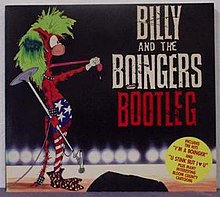 Billy and the Boingers Bootleg

Billy and the Boingers Bootleg is the fifth collection of the comic strip series Bloom County by Berkeley Breathed. It was published in 1987. It is preceded by Bloom County Babylon and followed by Tales Too Ticklish to Tell. Prior to publication, Breathed announced a contest to solicit original song submissions as if written by or for the in-comic heavy metal rock group, "Billy and the Boingers." The first-place winner's song, "I'm A Boinger," was included in the book on the A-side of a flexi...

I enjoyed that, thoroughly.

A charming parrot jams with his guitar-strumming human

Nice performance by Tico. He seemed to enjoy himself.
Vern was fluent in Parrot, & not much of a singer, but semi-loud music would get him wound up.

When I first listened to that parrot a while back, all I could thing was “Ethel Merman… is that you?”

Sounds like a pretty credible Three Stooges impression to me. All four of them.

These bits always reminds me of One Froggy Evening. Classic tragedy in cartoon form.

never heard of a parrot getting on vibrato