What San Francisco says about America

I found it interesting that his article on San Francisco includes – as part of his analysis of San Francisco – a discussion of his trip to Wal-Mart.

There is no Wal-Mart in San Francisco. The closest one appears to be in San Leandro. I can’t imagine why someone would go there if they live in San Francisco – there are much closer places to purchase anything you can get at a Wal-Mart. Which makes me suspicious of his claim that he is writing about his “new home.” Methinks this dude actually lives in the East Bay and is a sometime tourist here in the City. Just a guess of course, happy to learn the truth if it’s out there

There are vast tracts of cheap, makeshift homes and a countryside where people in the cities can return to if they lose their jobs or hit hard times.

But hey! As long as we don’t have shantytowns! That would be awful. Mainly for those of us who resent people for being able to erect a leaky ramshackle plywood structure to live in. I mean, why am I paying a mortgage? Amirite?

After living in San Francisco, the midwest, and Michigan for a time, it was very odd to visit Australia and get a whole different look at what a ‘homeless problem’ is like. I remember being in Port Douglas and telling a local that I’d been in Melbourne (beautiful, clean, lovely city) a few days prior. “Oh, not that awful place. You know, there’s nearly a hundred homeless people there? Maybe more, even. It’s like the worst parts of Detroit. Just terrible.”

It’s been a while since I was in Bangkok, although I recall reading the local english newspaper at the time and the front story was about a homeless person who starved to death in front of a major hotel. on Kho San road there were a fair number of people begging from tourists as well, so I am a bit skeptical about the number.

Now, I see homeless people where I live in Canada and many tend to gravitate toward the west coast because the winters are not as cold as the rest of Canada, but as a kid when I lived in one of the communist eastern bloc countries I recall there was zero homeless people. You didn’t see them ever. I don’t advocate the return of communism though, probably the best thing would be to have a guaranteed minimum income. I know that the next obvious question is where the money comes from, yet we never worry about funding prisons and other policing and medical costs. It costs over a $100,000 a year to keep someone in prison (more than to put them through university).

movements that have been grouped under the banner ‘identity politics’ largely read to me as groups of people able to establish a critical mass to crash through the wall and be recognized by a power structure. but isn’t ‘power structure’ where the oppression started to begin with?

This struck me so much I delurked. Yes! I think I know exactly what you mean. I’m pretty lefty but recently have felt quite alienated by what seems to me to be a nearly inevitable thing where groups get mad at “the system” but then replicate, within their own struggle to get free from the system, basically the same power-over dynamics that they were trying to get free from to begin with.

(Last I heard San Fran was paying it’s homeless a “salary” of 14k per year.)

You find a verifiable source for this “fact”, and I’ll donate to Trump’s campaign

They may not be paying $14K, but they probably could. According to this article, SF has 1300*6 homeless. Let’s round that up to a nice even ten thousand.

Now, how much is SF spending on its homeless? 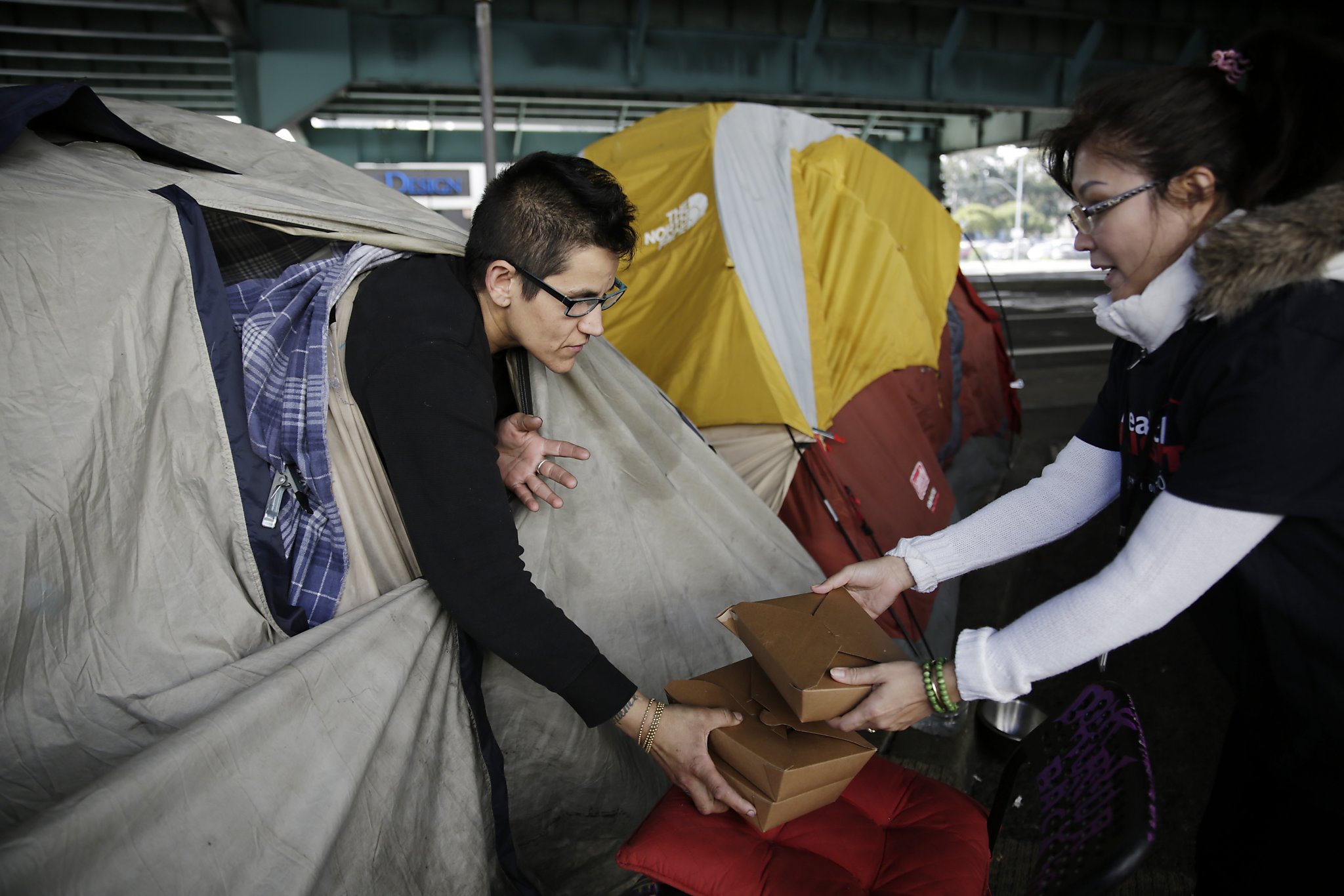 People around the world who watch the Super Bowl on television Sunday will surely see plenty of beauty shots of San Francisco, but football fans who visit and venture beyond the city’s spruced-up core will find some views that aren’t so beautiful. ...

That comes out to twenty-four large, per homeless person, per year. Why can’t we get them each three hots and a cot for that kind of money? The Chronicle article just might have a clue…

The city is allocating a record $241 million this fiscal year on homeless services, $84 million more than when Mayor Ed Lee took office in January 2011.

But the city struggles to track exactly how all that money is being spent and whether it’s producing results. Eight city departments oversee at least 400 contracts to 76 private organizations, most of them nonprofits, that deal with homelessness.

There are a whole lot of iron rice bowls in between that $241 million and the people sleeping rough on the sidewalks.

A whole lot of salaries being drawn by non-homeless San Franciscans who will find themselves having to look for work if the homelessness problem is ever solved.

Probably an excellent illustration of the Shirky Principle: “Institutions will try to preserve the problem to which they are the solution”

Having lived there, no. Not true in any way whatsoever.

I concur; that was a flat out falsehood, pulled from only God knows whose ass.

Last I heard San Fran was paying it’s homeless a “salary” of 14k per year.

They may not be paying $14K, but they probably could.

Yeah they could take all the money spent on government programs for the homeless, and just pay it as a salary to each person.

The homeless could just front up and register with their ID’s and proof of homlessness, and get it paid straight into their bank accounts, and then have 24 hour access to the money from any ATM with their card.

It’s an excellent analogy that demonstrates a particularly penetrating insight into the problem of homelessness and how governments can manage it.

It may have been a brain fart. The accompanying photo is a Target, possibly the one at the Metreon.

He also mentions a Home Depot, which there are none of within city limits.

I’m not blaming those people

The shelters are already full every night.

SF is incredibly hostile to its homeless population. Not sure where this idea comes from that it’s some sort of magical Disneyland.

SF is incredibly hostile to its homeless population.

Agreed completely; it’s only the more ‘temperate’ winter weather that’s “hospitable” to the homeless masses - in that, unlike winter in the Midwest or the East Coast, they can survive it.

So, lemme guess: you were glad when Reagan emptied out the mental hospitals so that the rich could pay lower taxes?

I have no idea how you arrived at that, but no, your guess is entirely incorrect

Really, you could hardly be more wrong.

I was referring to the reality that people trying to deal with homelessness have faced since (at least) O’Connor v. Donaldson (1975) (preceded, of course, in California, by the infamous Lanterman–Petris–Short Act, which, yes, RR signed into law in '67 - though that was before I was a Californian)

But the reason I said, “we can’t force people to accept shelter and medication unless they’re demonstrably a danger to themselves or others” is because the Supreme Court said we can’t.

It wasn’t my decision. I didn’t say that I liked it, or that I approved of it, or that it made me all gleeful and giddy.

It’s a reality I’ve had to deal with for years. I was just trying to explain it

I’m still a bit perplexed how you arrived at the guess you made. Not even remotely close. You misjudge me entirely.

that was a flat out falsehood, pulled from only God knows whose ass.

I’m gonna guess the ass in question starts with a B and ends with a -rietbart.

That comes out to twenty-four large, per homeless person, per year. Why can’t we get them each three hots and a cot for that kind of money?

The article you linked to states that:

Almost half of the $241 million — $112 million — is spent on supportive housing for the formerly homeless […] less expensive than caring for people on the streets — $17,353 a year per person

So apparently your ‘three hots and a cot’ are being supplied to ~6500 recently homeless people for ‘that kind of money’- presumably there would be thousands more homeless people without that spending.

No, no blame. Like I said, I’ve had to endure the “Well, maybe this drug will help and won’t fuck you up too bad” gantlet myself, so I can’t fault anyone for not wanting to go through that just to live in a shelter.

I’ve spent considerable time earnestly trying to talk people into accepting shelter and medical help when there were available beds and treatment slots to be had. And while it sometimes worked, and that was very gratifying, they often refused, and I’m describing what many of the people who refused told me about why they preferred their cardboard and tarps on a freeway margin.

It’s not as simple as it looks on TV.

I wasn’t seriously suggesting paying the homeless a salary. The point I was trying to make was about the amount of money spent on “programs for the homeless” and how much of it gets siphoned off by the bureaucracy.

presumably there would be thousands more homeless people without that spending.

If the people in “supportive housing” are no longer homeless, I agree you have a good point. But at that rate, another $200 mill should be sufficient to effectively solve the problem. And if one of the wealthiest and most progressive cities in America finds itself unable to afford that, I see no way for the country as a whole to do so.

And BTW, if I was given the task of providing food and shelter to a family of four, I think I could do it for a lot less than $70,000 a year. Probably have to move them out of the bay area to do it though.

I recall there was zero homeless people. You didn’t see them ever.

Were the homeless people moved somewhere out of sight? Helped to be no longer homeless? Something more sinister?

I lived in a small town where the “solution” to homelessness was to put them on a bus, one-way, to the nearest city. Not everyone wanted to go, but it was that or be arrested for vagrancy. Ugh.

But the reason I said, “we can’t force people to accept shelter and medication unless they’re demonstrably a danger to themselves or others” is because the Supreme Court said we can’t.

Easy. The US already has the infrastructure and means to solve the problem.
Make being homeless illegal and stuff them into your prisons - a few 100.000 more won’t make a difference.