What you think about Millennials says a lot about you, nothing about them

What you think about Boomers says a lot about you, nothing about them

Also, I said last week there is no thing that “millennials” have in common (except humanity) and folks just lined up to tell me how wrong I am.

The story starts at Burning Man. Fred and Daphne are former YouTube stars who now have a Mythbusters-esque reality show where they try to find and debunk ghost sightings. They heard that werewolves were at Burning Man, so they spend their last dime to go uncover the truth.

Naturally, they’re onto something: there’s a secret government Think Tank in a hidden facility underneath the sand, where we find Velma. She’s one of many millennial geniuses recruited to work on a secret project. It’s a nanite-virus that will infect people’s brains, and at the touch of a button they will become more altruistic and good-natured. According to Lee, everything goes awry when the millennial geniuses – who are always used to getting free A’s and a trophy for participating – don’t check their work and so the nanites do the exact opposite, pulling out the worst in people’s personalities. “Hence Donald Trump,” Lee joked. Those infected people transform and run amok in Burning Man.

Scooby Doo is a dog being experimented on in a lab, and thanks to a device on his head, he communicates through emojis that pop up out in tiny bubbles. 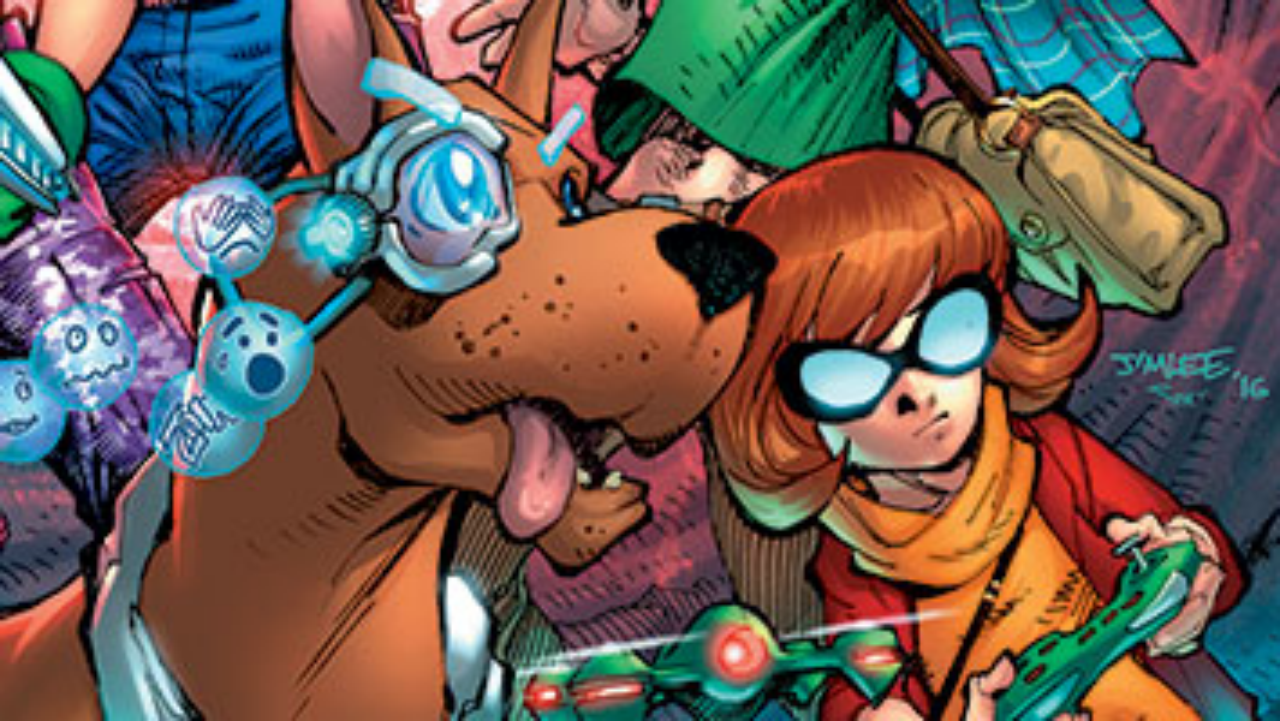 At WonderCon 2016, DC Comics revealed the inspiration behind their strange new Hanna-Barbera comics.

I have no idea what it says about the writer shrugs

And get off my peristylium!

“Social media is just more media … it just happens to be a new one that old people find frightening.”

Not true. So what about all of the spying, surveillance, advertising, malware and soforth that comes from? Or is that just now apparently “being old” or “frightening”?. Oh wait, this is a speech about marketing…

so its about spammin…ahem, marketing to people. Unless this guy is fine with surveillance and advertising though I guess he’s giving a speech about marketing…

I’m not “frightened” by social media. I just value my privacy and freedoms, and don’t overvalue convenience.

Apocrypha are the shit!

You are so far away from the point…

All of those things existed long before any of us, they just didn’t have bundled into one place like the internet.

Advertising was on TV and radios, spying was happening to people talking on the phone or face to face and malware, that can be reduced to any scams or phishing model.

He contradicts himself there. He points out that people tend to be narcissistic when younger, then says that young people aren’t narcissistic. Well, they are, but no more so than we were at that age. It’s fine to be annoyed by it, just recognize that it’s not some horrid new development.

He decries all generalizations and then:

What’re those if not generalizations?

Lastly, society and culture obviously do change over time. It’s not invalid to observe real differences between the experiences of people who were coming of age in the 40s and those coming of age in the late 60s and those coming of age today. Their environments are different. Today’s 18 year olds, for instance, aren’t worried about getting drafted. 1940’s 18 year olds weren’t able to be in constant contact with all their friends all day long. 1968’s 18 year olds had access to drugs that hadn’t even been invented in 1940, or weren’t widely available. 1940’s didn’t grow up in the shadow of nuclear annihiliation, and I didn’t grow up in the Great Depression. There are watershed moments in history.

Of course it’s pointless to rant about young people’s fashion or music or whatever. But cranky rants are not the same thing as observations of real differences.

The thoughtfulness and rationality of this post are completely uncalled for in this context.

Both were said in that keynote, and both contradict each other. I think that one can be classed firmly as a “bug” - ! So which is it? Are they narcissistic or not?

But are you not concerned with all the spying/survelience/malware/tracking online? It is intresting as I know and have met with “millennials” or “gen y’ers” or “echo gen’s” (I’ve seen all 3 terms used; from what I can gather they mean the same thing) and the ones I’ve spoken to are extremely concerned about spying/survelience/malware/tracking online!

with an amazing speech about the absurdity of generalizations about generations,

Just shorten that to: “with an amazing speech about the absurdity of generalizations.”

My own take on generational thinking is that generational thinking itself has changed. For the last century or more I think marketers have pretty aggressively pushed the idea of distinct, historical generations. Mainly because it is so much more easy to market to a group that thinks of itself as unique (and obliged to adopt a unique clothing style, etc.) than to just another fuzzy-bordered cohort of people who happen to be young at the moment. So, historical particulars of these cohorts granted, we tend to overemphasize their distinctiveness.

And then there’s also all the books and conference sessions that get created to help uncomprehending oldies understand the ontologically distinct(!) new generation. There’s money to be made here. If every emerging generation isn’t so distinct, then maybe hand-me-down clothes and eternal wisdom might do just as well as expensive, generation-specific, bullshit.

For the last century or more I think marketers have pretty aggressively pushed the idea of distinct, historical generations.

To a certain extent it’s true that targeting and researching certain demographics works, but marketers often exaggerate how and why - often to keep their jobs. What I like about Adam’s presentation as well is how it shows the importance of flair rather than just mindlessly relying on stereotypes to respond to analytics data.

Both were said in that keynote, and both contradict each other. I think that one can be classed firmly as a “bug” - ! So which is it? Are they narcissistic or not?

He’s also saying this in the context of a video clip of someone claiming that the millennial generation is exceptionally narcissistic.

He’s saying that young people are always more narcissistic, no matter when they’re alive, while the usual assumption is that “millennials” are more narcissistic than Boomers og GenXers were at the same age. And that is just not true.

I am not altogether sure that about his assumption that today’s younger folk are all completely hostile to every characterization of millennials. Or that they’re completely unresponsive to the idea that they represent some sort of historically meaningful “generation.”

I think we can talk about them in a sense… Look. People who graduated high school into a shitty economic recession… Then lived on college loans until they graduated.

And find themselves applying for careers in diamond shaped job markets. Few entry level jobs. Many mid level jobs, and a few top level jobs. Unlike the pyramids of old… Wherein many low level jobs existed in career fields.

So the Millennials I’ve personally met are clearly superior! They are the 1% of Millennials which we funnel into the few remaining jobs with career fields. They all seem hard working and rather savvy to me…

But then I realize 90% of them don’t gain access to lofty heights like… The third floor of an office building… So often.