To be fair most people just won’t ever understand the very non-linear CO2 emissions change from hundreds of millions of humans with cows and horses fuelled by grass and burning wood to tapping massive easy to burn reservoirs of carbonaceous fossil fuels, spiking the population over seven billion, and giving a large percentage of the 7G that fuel to heat, cook, travel, and expending energy to make mythical edifices and mountains of stuff.

What climate scientists say when they think their audience wants to hear what they’re saying (f-bombs ahoy): 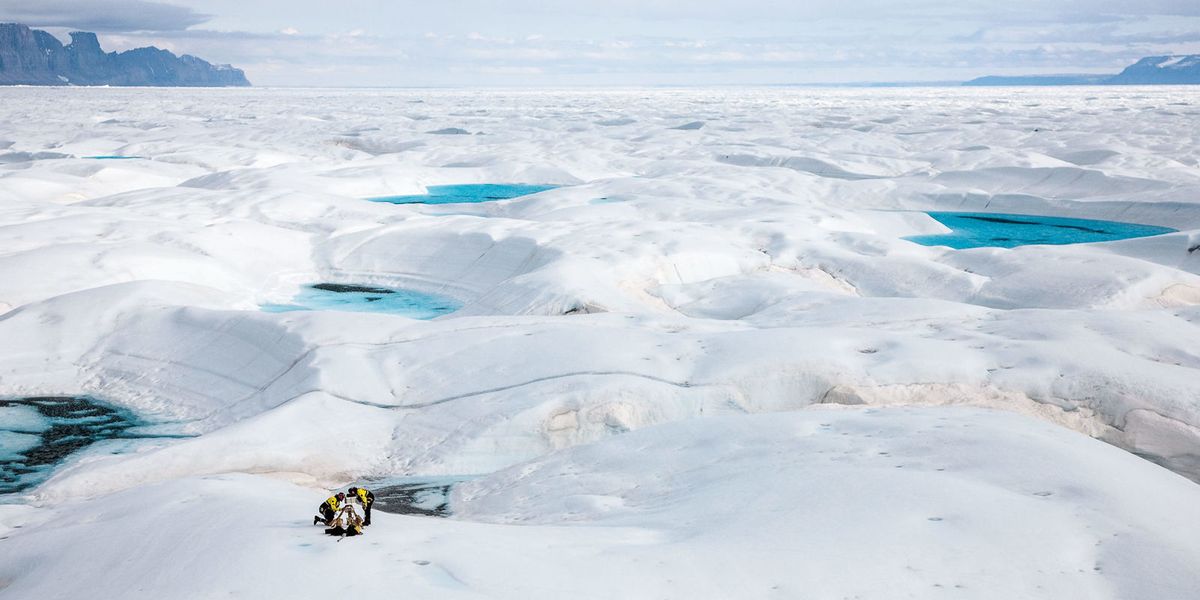 When the End of Human Civilization Is Your Day Job

For climate scientists, it can be hard to sleep at night.

What climate scientists say when they think their audience just doesn’t want to hear it:

Actually the current president’s differential surface albedo(absorbing vs reflecting IR back to space) compared to previous presidents is negligible though that coloring creates a interesting observer effect on global warming, it is the wasted fuel, for the electricity, to power computers, which waste much of that electricity as heat, so people can post to boards get all upset that he is a Muslim.

I have wanted to find a good realistic assessment, with some math, on how close to the pressure/temp saturation point we are on oceanic hydrates.
I can see a runaway process though would the sublimation not carry away enough heat to stabilize the remainder even considering the greenhouse effects of the release?
It is strange to think that we could(if that is realistic) Fermi paradox ourselves in a few decades with few people ever talking about the oceanic tripwire.
All I ever hear about is concern over rising ocean levels.

Graph a third line for “number of living Barack Hussein Obama Jrs in the US” for the same period and you’ll notice a correlation with the upward temperature trend that started in the mid-1900’s. Coincidence? I’m not a scientist or a statistician, but the numbers don’t lie.

The problem is one of trust. Our society has allowed all of the money to flow to the 1%, this is obvious to everyone that the wealthy get massive subsidies for their meager campaign contributions. Now how are average people who failed science and math supposed to trust a scientist who says the 99% have to suffer austerity while 1%ers will still flit about in helicopters and private jets trading carbon credits to prevent a promised climate change that most of the 99% can’t yet see any evidence of.

There is a solution of course, if we can just get the electorate to accept it.

It seems pretty clear that we just need more deforestation and aerosol release to counteract the effects of the CO2. Throw in a volcano eruption or two and we are probably good for another 100 years! Somebody get the GOP on the line. We’ve got work to do!

What could it possibly be?

A lack of support for people like Bernie Sanders that will actually enacts policies to combat climate change?

But, yeah… we can keep complaining about the situation… that’ll halp.

Of course it’s getting warmer. We’re all going to hell!

If only Superman hadn’t left earth. All the solar radiation he used to soak up…

I don’t understand, so greenhouse gases increased 2 degrees Farenheit over 100 years? Doesn’t that just make sense given the average temperature of the planet increased that amount in the same time? What is the y-axis intended to show in this graph with regards the the non-temperature related metrics like orbit, and volcanic activity and amount of greenhouse gases? Shouldn’t they show the scale of the y-axis for those other items in order for this graph to have any meaning?

To be clear, I firmly agree with the point the article is trying to make, but this is sloppy and simplistic propaganda the way it’s written. Data supports the conclusions clearly, so why try to hide the data or obfuscate it?

The interior of the Earth is warmer — by about 1,800 degrees Fahrenheit — than previously measured, a new experiment finds.

Add to this the fact that we are still emerging from an ice age, which may have shielded us from some of the effects of this heat, then you may have an alternative cause for global “warming”.

I don’t understand, so greenhouse gases increased 2 degrees Farenheit over 100 years? Doesn’t that just make sense given the average temperature of the planet increased that amount in the same time? What is the y-axis intended to show in this graph with regards the the non-temperature related metrics like orbit, and volcanic activity and amount of greenhouse gases? Shouldn’t they show the scale of the y-axis for those other items in order for this graph to have any meaning?

To be clear, I firmly agree with the point the article is trying to make, but this is sloppy and simplistic propaganda the way it’s written. Data supports the conclusions clearly, so why try to hide the data or obfuscate it?

The colored temperature lines are the modeled estimates that each climate factor contributes to the overall temperature. Each factor was simulated five times, with different initial conditions; each slide here shows the average of five runs.

So, the greenhouse gases didn’t increase by two degrees, but (based on their model) the temperature increase that can be attributed to greenhouse gases over that period of time was two degrees.
All the deniers have to do is disclaim the accuracy of their climate model, and they can just brush this away with the rest of the evidence.

Shouldn’t they show the scale of the y-axis for those other items in order for this graph to have any meaning?

Yes, of course they should. But the so called “debate” about the cause of climate change has long since ceased to be about evidence.

We can predict, with startling accuracy, a person’s opinion about the causes of climate change by asking three questions, the answers to which are entirely orthogonal to the evidence.

I wish he did not, but I’m afraid Mr. Munroe has the right of it… 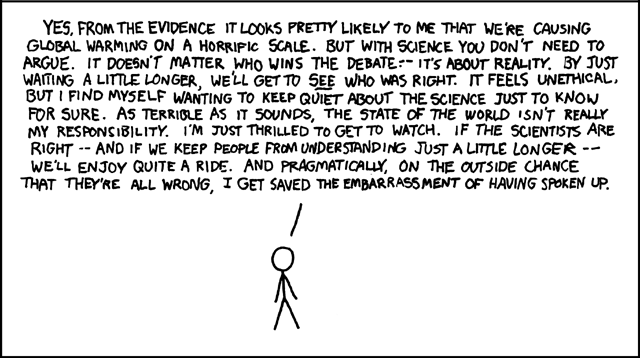 There are so many well-meaning conservatives around here who just assume global warming is only presented as a moral issue for political reasons.

The Earth’s core temperature is difficult to measure, but it being hotter than expected is not the same thing as it increasing. More to the point, it doesn’t even imply uncertainty in the amount of heat actually coming to the surface, which is something we measure more directly. We are not heating up from an increase in subterranean warming or magnetism; whoever suggested this to you as an alternate explanation was either very foolish or very dishonest.

The same goes for any mention of ice ages, really. These relatively slow changes are not magic, after all; as per wikipedia, besides greenhouse gases they are largely regulated by:

changes in the earth's orbit around the Sun known as Milankovitch cycles; the motion of tectonic plates resulting in changes in the relative location and amount of continental and oceanic crust on the earth's surface, which affect wind and ocean currents; variations in solar output; the orbital dynamics of the Earth-Moon system; and the impact of relatively large meteorites, and volcanism including eruptions of supervolcanoes.

And it is easy to find good evidence none of these things are behind the much more rapid increase in temperature we are currently seeing; this *very article* discounts orbital changes, solar variation, and volcanoes. That leaves...giant extraterrestrial impacts and continental drift to explain the last few decades?

So no, there actually isn’t any remotely plausible alternative in what you are saying. Any actual look, from basic physics and simple correlations to complex models, has all given the same answer. These others are instead things offered speciously, in hopes you won’t give them any actual scrutiny.