When pseudoscience becomes both annoying and boring

To this list of pseudoscience stories everybody’s sick of reading about, I’ll add “single dietary changes that are supposed to fix every ailment ever” and “one technology that can solve the energy crisis instantly”.

I’m not surprised. These are just the kind of weird tricks that people like you hate.

… I can only assume you mean “people who are not beholden to Big Coconut”.

It’s All So Simple once you accept the truth of whatever I’m peddling today, you should try it!

The best pseudoscience is the Singularity theories.

Nothing more funny than watching people go on and on about how real science fits in with the nerd rapture.

I’d add a concept to the list of ideas it is time to retire:

“My personal subjective experience trumps all science to the contrary.”

One of the reasons we had to invent science is because personal experience is subject to human bias. Every pseudo-science, every BS alternative medicine practice has someone who’s “personal experience” says it is true. Science is the tool we use to test whether such perceptions are valid, whether what seems true is actually true.

This has been countered with:

People like Steve Jobs shouldn’t be able to fall into these traps if it were just about personal testimonies:
http://www.sciencebasedmedicine.org/foolishness-or-fraud-bogus-science-at-nccam/

Yes, science is actually hard, and requires not only putting your trust in the methodology of science over personal experience, it also requires you to be appropriately skeptical of scientific studies, many of which are wrong, because science is an imperfect process that advances by fits and starts. This means you have to keep a constantly open mind - open, not credulous. Science is still the only demonstrably reliable way we have of objectively knowing about how the world works.

I’ll disagree with you there. We all have human bias. None of us are immune to it. Vivid stories are much more inherently appealing to us than data. So, it is entirely possible that Jobs never saw any sound data extolling the virtues of the alternate treatments he took. But I’ll concur that mixing fake medicine with real medicine in hospitals and academic institutions is a serious problem. That that is really happening, that Medieval pseudo-science like Rekki is actually found in modern, scientific hospitals shows just how powerful human cognitive bias is. It is really kind of depressing.

I was just using Steve Jobs, because in general, his critical analysis has served him well enough to succeed in business, but whatever information he used to follow the pseudoscience must have been more than just personal anecdotes.

He’s just a good example of there being more than just people listening to testimonials. There’s a whole industry now, as illustrated in my link, of getting studies and funding and implied government approval for this stuff.

I was just using Steve Jobs, because in general, his critical analysis has served him well enough to succeed in business, but whatever information he used to follow the pseudoscience must have been more than just personal anecdotes.

Must have been? Just because someone is smart doesn’t mean they can’t be subject to the same human biases as the rest of us. Granted, I think you are likely right, that he was given advice by “experts” in their field with “clinical experience” - which is, essentially, lots of anecdotes, but told by someone wearing a lab coat. But I’m speculating blindly, and I wouldn’t try to characterize my speculation as “must have”.

No mention of astrology?

I think Tevia from Fiddler on the Roof can tell us that smart or not we have massive selection bias toward thinking wise people like Jobs because of his life success as expressed in monetary terms.

If I were a rich man,
Ya ha deedle deedle, bubba bubba deedle deedle dum.
The most important men in town would come to fawn on me!
They would ask me to advise them,
Like a Solomon the Wise.
If you please, Reb Tevye…
Pardon me, Reb Tevye…
Posing problems that would cross a rabbi’s eyes!
And it won’t make one bit of difference if i answer right or wrong.
When you’re rich, they think you really know!

It’s not just that, anyone who runs a successful business requires critical thinking skills.

It says at the minimum, he’s able to manipulate information and project that information into the future.

While I do agree that often times people can just get swept away in currents and find themselves in positions that in no way resembles their critical analysis skills, Steve Jobs is not one of them.

And I have no love of anything Apple related, in case anyone thinks this is some kind of affable appeal to his legacy.

No mention of astrology?

You mean the precursor to modern science?

OK, that’s two current BB threads with “If I Were a Rich Man” lyrics…cue The Twilight Zone theme?

I believe that the historical record is clear on this – which actually raises the question of why our science reporting never attempts to tackle the more difficult, yet just as problematic, issue of dogmatism in science. Pseudoscience exists at one pole of a continuum whose opposite pole is dogmatism. The public’s task as critical thinkers is to identify both, but the debunking culture which dominates most of the reporting today tends to cater exclusively to the textbook view of science, which focuses almost entirely upon the successes of science. From Against the Tide A Critical Review by Scientists of How Physics and Astronomy Get Done:

In other words, any failure to address dogmatism in science reporting can exhibit a sociological side effect which is peripherally related to the point made in Richard Feynman’s Surely You’re Joking, Mr Feynman! (btw, part of the book’s conclusion) …

That warning truthfully applies to all attempts at science.

When debunking against-the-mainstream scientific claims becomes the principle activity which drives scientific discourse, it can implicitly suggest to those who have not had the time to study history of science the simplistic narrative that science arrived at the current theories in a linear, unerring fashion. What the public needs to do – with or without the support of science reporters & scientists themselves – is to seek out potential sources of dogmatism in theory. We need to reject the textbook view of science as overly-simplified, by coming to grips with the fact that there are mistakes in our theories today.

The way to do that is to build independent knowledge systems which act to increase comprehension in the sciences amongst laypeople, create guidelines for effective clashes of worldviews, and support rational decision-making about worldviews and longstanding controversies in science by reducing the overhead associated with investigation of against-the-mainstream ideas. The return on such efforts, in the long run, and with even a very minor success rate, will be an increase in the competition between scientific models, and a challenge to dogmatism in science today.

Our fundamental problem with unification is that a certain number of ideas have been tried out which all have well-known problems – and string theory is now one of them. But there’s a lot of things that haven’t been tried … If you start to get to know the subject, you realize the number of people working on the subject … It’s a fairly limited community. It’s a few thousand people … And … most of them are kind of following the lead of a fairly small number of people. The number of actual different ideas that people are trying out is actually quite small … There’s a much larger array of ideas out there which nobody has taken the time to look into because the way the field works … These things are very difficult. You would have to go spend several years of your life doing this, and if no one else is interested in what you’re doing (and most likely, whenever you’re trying out new ideas, it’s not going to work anyways). The way the field is structured, it’s kind of very very hard to do that kind of work, because it’s likely to damage your career. If you’re trying to do it when you’re young, you’re gonna very well end up not having a job.

I digested most of that. And I’m just going to respond as a tl;dr *though I did mostly.

Yes, the critical analysis we imagine people are capable of, falls to both ends of the spectrum.

But in the face of the media blasting their pseudoscientific message, few people are willing to enter into a discussion about how science itself runs with the ball.

Here’s my favorite anecdote of science, politics and knowledge: 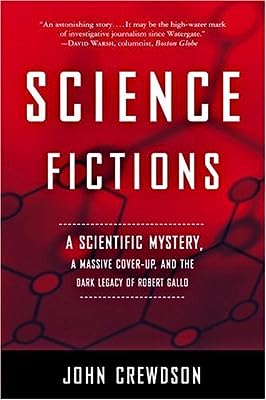 Science Fictions: A Scientific Mystery, a Massive Cover-up and the Dark Legacy of Robert Gallo

A Pulitzer Prize-winning journalist describes the competition between scientists--including Robert Gallo of the National Cancer Institute--over credit for the discovery of the HIV virus in a study tha ...

I spent a good deal time (aka, reading books) about science funding, scientific malpractice and the like to understand what the crossroads look like.

It’s not pretty, at all, in any sense. The amount of knowledge we expect people to properly critique without grasping at experts or governmental authority or other stamps of approval are staggering.

And the limitless ability of people to create self-referential studies/citations in the Internet age is just making the whole incoherent.

The best we appear able to do is fund the basic education, and try to solidify the idea that progress and conservatism are equal parts of a well functioning society.

I digested most of that. And I’m just going to respond as a tl;dr *though I did mostly.

tldr itself is a byproduct of pigeonholing scientific discourse into sequential threads. Since each person comes at science with their own particular knowledge, the medium should better support their ability to jump around, and at all times know why they are reading what they are reading. As much as I enjoy the features of Disqus, it nevertheless generates lots of tldr moments for people, because people are fundamentally not sequential thinkers.

I agree. I know I’m consistently just building a bulwark of my own thoughts, and use confirmation bias to skip over things.

But alas, science is just as much about finding facts and evidence as it is about avoiding/disregarding noise.