Last Friday, a white dude tried to blow up a plane to "fight a war" in America and no one cared

Had he been a Muslim, or black, this would have been a bigger story than the Vegas shooting. Because he was your basic deranged white guy who wanted to burn the planet down, it’s no news at all.

“White” is not really A Thing. Maybe referring to such people with a more accurate label such as European-Americans would remind them that they are all immigrants, and help them to have more perspective to not make others’ lives miserable.

ETA: So, them being “white” is topical enough to be in the title, but not enough for me to unpack it? FFS, please grow up, people.

I guess we all tend to categorize people into groups, but how we do so depends on our own culture. Americans tend to put the category “race” way ahead of other categories that I care about much more.

Not only that, but there tends to be a lot of handwaving about how “race” is used or defined. For example, the OP speaks of Asian representation, yet has a content tag of “race”. But Asian is not a race, it is a region. Mongoloid people are a race in Asia - yet they are not exclusive to the region, nor it to them.

It seems ironic that many progressives are quick to tell people that it is worth making the effort to use correct terms to avoid offending people, that thinking and minding what you say is a small and worthwhile tradeoff to make for the resulting benefits to society. Yet if you point out to them that referring to anti-Mexican or anti-Islam as “racism” is very sloppy rhetoric, they often fall back into the same defensive postures that typical conservatives do. That it is pedantry, frivolous semantics, that they are being expected to change their habits to please an annoying interlocutor. Sounds familiar, doesn’t it?

People often defensively play that off as criticizing the loose use of the terms is somehow an implication that the phenomena are somehow not a problem, rather than being a conscientious observation that we could make a better argument against what we acknowledge as being a problem. Or at the very least that there are multiple productive ways to frame and act upon it.

Isn’t an “elephant in the room” here the idea that you would know an “Asian” if you saw one? The only way that would work is if we were already navigating our social and media spaces based upon stereotypes. In media studies, this gets euphemized in “coded as…”, but it still amounts to guessing what somebody else will think of certain traits. Not unlike with non-fictional people, it seems easier and more accurate to limit ourselves to what we actually know about a person. Which is often honestly not very much. That’s a process of interrogating their origins, culture, traditions. It is ultimately what a person tells us about themselves, rather than us imposing something upon them.

“Asian” versus “white” is a false dichotomy, since one is a continent, and the other is a (sort-of) color. Whereas I agree that there are problems of representation in Hollywood, people who feel a need to be critical need to be careful in how they frame bigotry in language, lest they undo their argument before it has even begun.

Such representation in movies can be dealt with in terms of race, color, ethnicity, region, culture, and religion - and I would say these are definitely not interchangeable. But people casually do so all of the time. Since Asia is a continent, what does invoking it suggest that we know about a person? Why should they look a certain way? But the OP discusses the prevalence of ads and alphabets, which are cultural. And many fail to consider that the critic themselves is deferring to stereotypes to draw such conclusions about people based upon their appearance in movies. Or even simply assuming what kind of person is “default” when reading literature. A failure to unpack the underlying semantics is how imperialism sneaks in through the back door and so occupies norms, expectations, and assumptions - in effect creating the very stereotypes we are trying to criticize.

If we intend to effectively critique bigotry and bias, I think we need to compare like categories in order to say anything meaningful and thus make any progress. Contrasting continent versus continent, color versus color, ethnicity versus ethnicity. Not nationality versus religion, or culture versus color, for example. When these categories seem to intersect, it is important to point out how and why they seem to, rather than suggest that they have any innate connection or equivalence. But I know - that requires some effort, and needing to think about what we say.

Yeah yeah, so race is a social fiction. With real effects.

Blathering on and on about delusional Category Trouble doesn’t do shit about those effects.

Yes, race is a social construct.

No, that doesn’t mean we should pretend that people our society perceive as “white” don’t collectively get preferential treatment compared to everybody else.

Blathering on and on about delusional Category Trouble doesn’t do shit about those effects.

I don’t disagree. But what else are people doing in color topics besides commiserating about the existence of the problem? Being singled out would be great if other people were engaging in real practical solutions themselves, rather than also brainstorming about our collective experiences and opinions.

But what else are people doing in color topics besides commiserating about the existence of the problem?

How can you fix the problem if you don’t acknowledge its existence first?

Responding to “black people are routinely murdered by police” by saying stuff like “I don’t see color” or “what does it mean to be ‘black’ anyway?” is not just profoundly unhelpful, it’s disrespectful to the people who have to live out the reality of race in America every day.

What I just wish was acknowledged occasionally is that this way of talking about race is incredibly American. I mean, we are discussing an American who senselessly shot mostly Americans in an American city so it makes sense. But using ‘white’ means it gets expanded to everyone on Earth with pale-ish skin, as if Belarus peasants in 1844 had anything on Earth to do with antebellum South.

No, I’ve seen Belarusian, it isn’t spelled like that.

I will happily grant that a similar though not equal conception of race exists wherever colonialism does because, naturally, racism is a product of colonialism, or rather, both form a toxic cycle

Social construct doesn’t equal “not a thing.” It is a thing, because it gives certain people power over others.

How can you fix the problem if you don’t acknowledge its existence first?

What do you mean “first”? First, as in the dozens upon dozens of similar topics where people simply wring their hands at the shibboleth of “racism is bad”? The problem is rarely going beyond that obvious sentiment. People seem to acknowledge that how we speak about race IS very important. But yet whenever I call attention to how we or others do so, there is always a controversy. So it can lead to a feeling that discussion is not open, but rather being pushed along rather token ideological lines.

Responding to “black people are routinely murdered by police” by saying stuff like “I don’t see color” or “what does it mean to be ‘black’ anyway?” is not just profoundly unhelpful, it’s disrespectful to the people who have to live out the reality of race in America every day.

That’s just the thing - black is not a race, black is a color. If this seems pedantic, consider how much nuance in language we have achieved with regards to sex and gender issues. “You mean that homosexual, transgender, faggot, drag queen, and pervert don’t all mean the same things? Since when!” In modern discussions that would be a major facepalm moment. YET in topics on BB - a fairly enlightened place with regards to cultural problems - people are conflating race, color, region, ethnicity, etc constantly. No, they don’t all mean the same thing. And having a stable discussion about these is like a game of semantic wack-a-mole.

We need a more consistent vocabulary for discussing these issues, because what people say matters and frames issues. Arguing apples to oranges is a category mismatch and a waste of time. At issue is not whether I understand that there is a problem - it is why our rhetoric about the problem is so sloppy.

But using ‘white’ means it gets expanded to everyone on Earth with pale-ish skin, as if Belarus peasants in 1844 had anything on Earth to do with antebellum South.

I am perfectly willing to acknowledge that I am a beneficiary of white privilege even though all my known ancestors entered the United States after the Civil War. The same goes for Americans whose ancestors were Belarus peasants.

How about Belarusians whose ancestors are Belarusian peasants? In Belarus?

What about them? Why bring them up at all?

Well because my original point was that ‘white’ used in the way it is used here is an American thing, though as @milliefink points out, it’s a colonial power thing to be more precise.

Except, while that is a thing calling it ‘white’ associates it with the, I don’t know, Лісоўскі family who’ve been farming barley on the same patch of East European soil for the past five hundred years. They are invariably ‘white’ seeing as Slavs are light-skinned (provided you aren’t in the Russian Far East, I guess, where things get a little complicated) but they have nothing to do with whatever it is whiteness imbued in the bastard from Las Vegas.

It just seemed a self-centered definition, is all.

“White” is not really A Thing. Maybe referring to such people with a more accurate label such as European-Americans would remind them that they are all immigrants, and help them to have more perspective to not make others’ lives miserable.

There’s a view that this social construct of whiteness has historically excluded waves of immigration to the United States.

The assertive camp argues and documents that these non-Anglo-Saxon immigrant groups became white from separate races historically. This camp is best represented by such scholarly works as The Wages of Whiteness (Roediger 1991), How the Irish Became White (Ignatiev 1995), How Jews Became White Folks and What That Says about Race in America (Brodkin 1998), Whiteness of a Different Color (Jacobson 1998), and Working Toward Whiteness: How America’s Immigrants Became White (Roediger 2005). The dubious camp casts doubt upon, and challenges, this “becoming white” claim (see, for example, Arnesen 2001; Fields 2001; Guglielmo 2003; Reed 2001). In particular, Arnesen (2001) argued that by manipulating definitions and putting words into historical subjects’ mouths, some historians first made certain European immigrant groups “nonwhite” and then made them “white.” 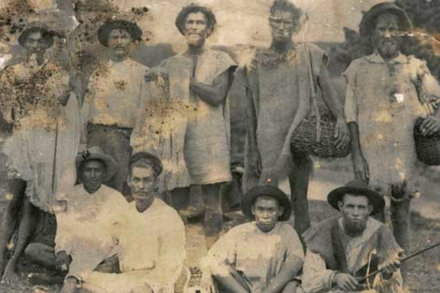 Debunking a Myth: The Irish Were Not Slaves, Too

Widespread memes used against African-Americans say America was built by Irish slaves whose history has been covered up. That’s false, historians say.

But as we say in the field, “Social constructions don’t have to make sense; in fact it’s usually better that they don’t.”