Why do dogs tilt their heads?

Well, dogs do have mirror neurons that fire when they engage with humans, so in that sense dogs have the neurological capacity to reflect human emotional states (not all animals do - iirc, it’s some apes, canines, & equines?). It’s been theorized that canines were “primed” for human companionship because of this capability and that breeding has enhanced it, which is why dogs are great assistance and therapy animals (among other reasons, too).

Or natural selection worked on humans and those that found doggie behavior attractive and kept them close had a higher survival rate.

I’ve seen that suggested by some anthropologists, yes. Not only assistance with hunting, but garbage disposal meant fewer infections among tribes that kept dogs versus those who didn’t; also they could stay in one place longer because the garbage heaps didn’t build up so much, thus leading to settled towns.
The idea that man/dog is a symbiosis has some traction. Dogs seem to have had some sort of domestication from at least 17 000 years ago - long before sheep or cattle.

My first reaction was to search for a shot of my dude tilting his head cuz he’s a beagle and does it perfectly, and somehow I don’t have one on my phone. This makes no sense at all and will be rectified when I get home. I’m fairly disappointed with myself.

Edit: FB to the rescue (wow that was weird to say…) 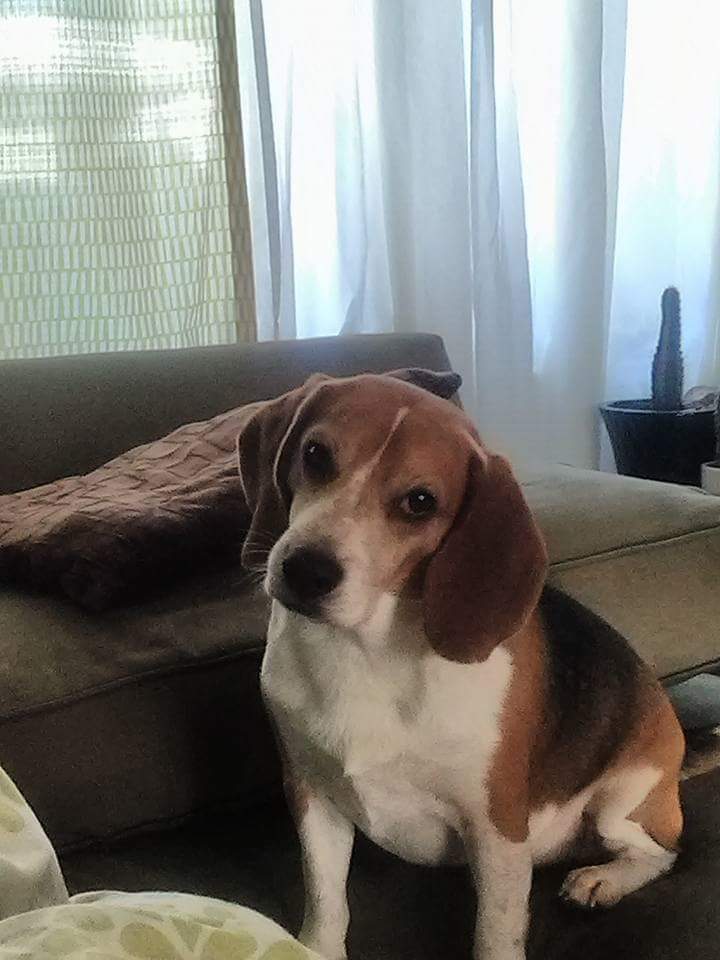 The study in the video claims part of it is moving their big nose out of the way so they can see your facial expression better. But by their own data that is at best a partial explanation.

Many of them likely do it for the same reasons that other organisms do. To locate the sources of sounds, and to hear other changes in their surroundings. The angle of the head and shape of the ears are crucial to this process, and changing either gives very different results. Dogs’ ability to change the shape of their pinnae suggests that they are far more sensitive to acoustic phase information than many humans. A head-related transfer function (HRTF) also sometimes known as the anatomical transfer function (ATF)[citation needed] is a response that characterizes how an ear receives a sound from a point in space. As sound strikes the listener, the size and shape of the head, ears, ear canal, density of the head, size and shape of nasal and oral cavities, all transform the sound and affect how it is perceived, boosting some frequencies and attenuating others. Generally speaking, the HRTF boosts frequencies...

Actually it’s possibly quite longer than that.

There was similar discussion going on two years ago:

If you look at stone age or bronze age settlements there was apparently some sort of “man’s best friend … until he got hungry” attitude going on… In depth info about domestication of dogs: O. Thalmann, B. Shapiro u. a.: Complete Mitochondrial Genomes of Ancient Canids Suggest a European Origin of Domestic Dogs. In: Science. (registering required

) https://de.wikipedia.org/wiki/Doppelgrab_von_Oberkassel (only available in german

TFA says “zwischen 32.000 und 18.000 Jahren vor heute”.
I’ve seen several articles recently (I haven’t kept references) suggesting about 17000 years as the date at which we can be reasonably sure they weren’t just hanging around. But it’s all somewhat speculative till we find a 17000 year old collar with “Rover” on it.

Ballast shifting within an otherwise-empty skull.

Definitely this. They tilt their heads even if there is no human present but they hear a faint sound.

I’m not sure about the face thing.
Our dogs would tilt their heads at stereo speakers when we played Pink Floyd.
And dogs and speakers have been long noted for their head tilt for close to a 100 years.

I think it’s just a way they use to process information to send a ‘off line buffering’ message.
Like a human would do with a raised eyebrow and a headtilt.

The fact that little dogs don’t do that might be because they don’t give a shait.

Puppies try out every expression on people. They are doing it randomly, most likely, but some of these expressions are rewarded, and they keep doing it.

When a puppy tilts its head, the “AAWWWW!” and subsequent petting are nigh inevitable.

Not it? Huh. Well, what’s wrong with just telling us and not making me sit through a damn video?

That’s too bad. I’m half deaf and find people watching still interesting even if I’m not hearing 100%.

I would go with dogs tilt their heads for a better read of our facial expressions. Dogs look at humans with a a left-gaze bias, meaning they look at the right side of human faces first since humans express their most genuine emotions through the right side of face.

My first hypothesis would be canine fovea shape; it is about vision, but it’s only indirectly about noses.

The fovea is the high-resolution bit in the centre of the human retina. While humans have a circular, central fovea, wolves have an elongated fovea-ish area that spreads laterally across the eye. Their central vision isn’t as good as a human’s, but their peripheral vision is much better; good for chasing prey. Tilting their head gets more of their fovea on target, assuming that their target is a tall skinny thing like a human.

As you move across the doggy spectrum from wolves to shitzus, their fovea gradually gets less wolf like and more human like. We’ve hyper-selected the lapdogs so much that we’re halfway to converting them into humans. That possibly explains the reduced occurrence of head-tilting in short-snouted breeds; the wolfier dogs tend to be long-nosed.

Oddly enough beagles (AIIRC hounds in general) are closer to wolves than most dogs. I look at the little guy and I think… No way. He’s so small! That howl tho… It’s ancient. I can hear it.

Crude test for wolfish vs humanised fovea: do they watch television? Are they attentive to faces?

Beagles were bred as rabbit hunters or somesuch, yes? That’d basically be just an achondroplasic wolf…

The really humanised ones are the decorative lapdogs; they’ve been selected for visual attentiveness to human faces.

Wallet-dog and his lil’ red scarf is, I hope, called Roscoe. Any dog with those skills and that outfit needs to be a Roscoe.

Because they can, No, wait…that’s why they lick their nuts.

Guy in the vid sure does a lot of hand waving.